Back in November, when I first sat down to review the newest iteration of Star Trek, I theorised that, at the very least, this new incarnation of the seminal science fiction series was a product of the times. Produced as a  serialised season for both pay-per-view and Netflix and then cut up into ‘chapters’; Episodes 1-9 were heavily laden with religious and political tropes, clichés and subversive stereotypes.

The obstinate Chapter 2, or episodes 10-15, continue this theme. More so though and bizarrely, the back-end of Star Trek: Discovery captures a market share and trend in binge-watching generalists who may know nothing of Trek as well as pandering to minority and female audience members to gain new ground. Such that to monitor if this new Star Trek is any good you only need a cursory glance at social media:

When #spaceboos & #StarTrek:Disco are trending then you know roughly why so many people suddenly like it, but also who those people are in relation to the ‘diehard’ or “core” fandom. Whether or not the break over Christmas and New Year was actually good for the momentum of the show, it definitely allowed time for both sides to digest the change in format and also for social media to take hold and usher in a new number of people who seemingly jumped on for Chapter 2 having not even seen the first 9 episodes. 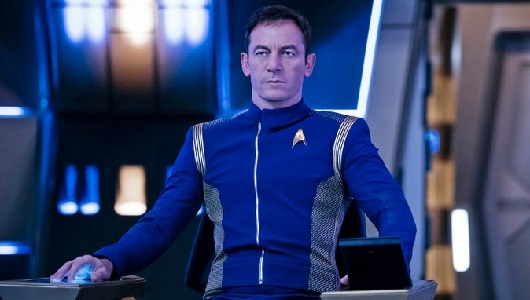 This is because, despite the serialized nature of the ongoing story, each episode continues to be so divergent to each other and different that it is hard to know where you stand and where to start watching.

The opener and first half of the series seemed to relish in setting up as many wild and weird fan theories as possible, in an attempt to redefine itself and also remain edgy – ‘Is Captain Lorca (Jason Isaacs) actually a double agent from the mirror universe?’, ‘will we see Phjilipa Georgious (Michelle Yeoh) character again on screen?’ and exactly how will the Klingon War be won?

The second half of the season then simply indulges said theories, answering all of them as expected and throwing so many nods and winks at the screen as well as dropping references left and right that you could be forgiven thinking you were back watching Enterprise Season 4. Except that the show was conceived as a whole by Bryan Fuller long before viewers get to see it, which means the writing was such that it set up its own answers and then revels in showing said answers off as if to say – “Isn’t this what you always wanted to see in your Star Trek? *wink*”.

This type of writing, pandering to the lowest common denominator, is exactly what we saw in the final season of Enterprise, as could be expected and back then 10 years ago was fitting fan service, a sendoff and salute to everything long time views had only dreamed of. 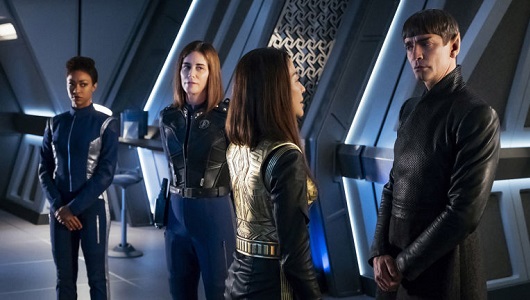 Discovery is less of a coupe for fans than a hot mess of every sordid and titillating fan’s dream drenched in a dark layer of allure that by the final episode “Will you hold my hand?” Discovery finally tries to come back into the light and turn itself around for season 2 in a direction that vaguely resembles the United Federation of Planets we remember. The references to the final season of Enterprise are by no means token as well, as Episode 10 kicks things off with a Jonathan Frakes special, with a cameo from none other than Jonathan Frakes himself!

Frakes knows Trek better than most as the second in command to Captain Jean-Luc Picard and having played William Riker for so many years. Producing and bringing Star Trek: First Contact to screens, was one of the single best pieces of Star Trek I have witnessed, and yet later on with Star Trek Nemesis, one of the worst. Frakes seemingly became a bit self-indulgent, making the films all about him and going so far as to co-opt the very last episode of Star Trek on TV, Enterprise Season 4 “These Are The Voyages…” and again, making it all about William Riker in the future than the sendoff everyone had hoped for.

So it wasn’t that surprising that he had a hand in the new Star Trek: Discovery and yet was a stunt that this particular viewer was not expecting unless the ratings were already, that bad. 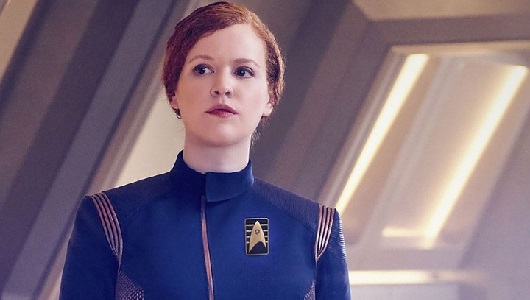 It is hard to talk about the remaining episodes except to say that episode to episode they diverge wildly and stray far away from where the season began. What was set up as an epic war of politics between the Federation and Klingons is largely forgotten about until the final two episodes, and then rushed through to a conclusion that is ultimately not that satisfying.

Another odd choice is how the first and second chapters diverge in way of production and settings. One noticeable sore point of the first 9 episodes is that there are hardly any aliens visited, or planets and that the focus is on larger CGI monsters or beasts without any of the standard away team missions. Then suddenly this is rectified later on as we finally meet a token reoccurring Andorian, visit 2 new planets and finally spend most of the finale wandering around the backyard of the Klingon homeworld Qo’noS, except not: it’s actually an Orion outpost of sorts. 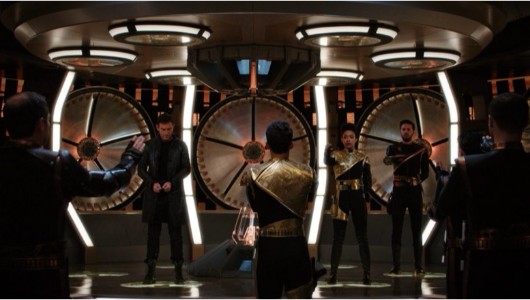 Despite the best efforts of the writers and producers the finale of Star Trek: Discovery typifies everything wrong with it, but also what makes it so watchable. Seeing a junior cadet getting high with Orions or watching as Michelle Yeoh seduces a number of them half naked is why people love to hate the show and exactly what has made it so meme-worthy.

As the season closes out the central character Michael Burnham (Sonequa Martin-Greene) reflects on hope for the future and yet, staring directly at the camera seems to be driving home exactly what is and isn’t Star Trek. That hopefulness is as much for the future of the show and franchise as it is for the main characters themselves.

Even with bizarre leaps in logic and sloppy writing, even though in one episode they allude to finding out how the Defiant ends up in the Mirror Universe (hint: it was a Tholian web) and then in the next forget all about physically finding it, regardless of the overemphasis on homosexual relations and racial stereotypes Star Trek: Discovery remains watchable, if frustrating through the ‘fun’ of it.

Already the internet is going crazy over that ship appearing in the last few seconds of the show and yet if that truly is the direction for season 2 I may just have to set phases to stun and wake up when it’s all over.

Continues to be fun and objectively watchable
Plenty of original callbacks
Resolves most of the major character arcs
#spaceboos, #StarTrek:Disco
Takes a weird tangent for a number of episodes
Throws as many fan theories at the screen till something sticks 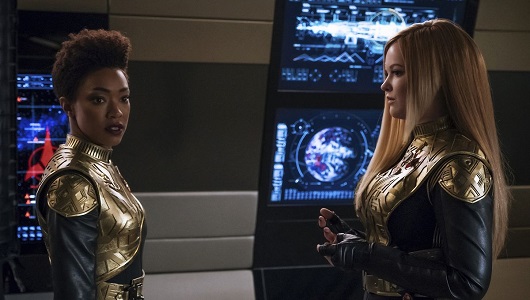 Star Trek: Discovery manages to untie itself from many of the knots it had created, usually by just killing off a character arbitrarily. Sadly my final wish is that that show shines bright and fast and neither lives long nor prospers – at maximum warp!

The show was purchased by the author or viewed on a personal subscription service.
Official Show Site