Marvel Studios finally bring the standalone Black Panther to life, in a tale that is part James Bond part Lion King in possibly the most Disney of all the Marvel movies to date. Full of music, energy, colour and costume it is a tour de force for the predominantly black cast headlined by Black Panther himself, Chadwick Boseman. In the wider cannon, Black Panther also signals the final piece of the puzzle before Avengers: Infinity War drops in May and what transpires will change the world forever.

Set in the fictional city of Wakanda, Boseman plays T’Challa, worshipper of the Egyptian God Bast, the boy king who inherits the throne after his father is killed during the events of Civil War. Directed and written by Ryan Coogler the overarching arc is not overly original but boosted by the  a cavalcade of actors including Andy Serkis, Martin Freeman and Forrest Whitaker not to mention a strong supporting female cast of characters who are clearly, just having fun.

The story of the king who has to prove himself, untested and then denounced from the throne, challenged by a mysterious outsider who usurps the throne and exiles said family is straight out of other Disney movies but the sweeping shots of Africa and connections to other Marvel movies sets a tone of its own.

The themes around the ‘city’ of Wakanda and its place in the world are a bit more broad and whilst the cast and actors are clearing riffing on racial stereotypes and winking at the audiences reactions, there are more serious political overtures of first world aid in foreign countries, slavery, the need to bear arms for protection, xenophobia, black history and civil war. Despite the relative wealth of Wakanda; literally built on a Chitari asteroid of pure vibramium in the middle of Africa, the citizens have remained largely hidden and unincorporated into the rest of the world. What was established as 5 tribes, only 4 have remained united with the outside mountainous Gorilla city sitting at odds with Wakandan way of life. 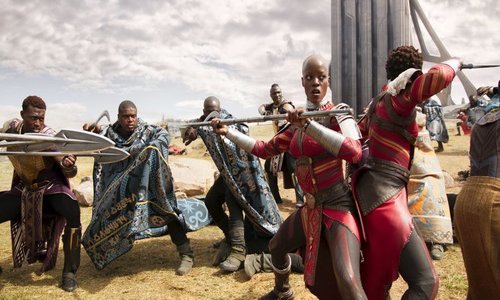 Obstinately a metaphor for the hidden cradle of life, modern day Wakanda is modeled after Zulu and ancient Mezapatanium cultures in a veritable melting pot of old, modern and highly alien futuristic with every conceivable technology from spaceships to stun guns spinning out of the alien asteroids liquid and vibranium.

Early on in the film, Coogler does veer on a tangent that although world building, detracts somewhat from what could have been an even more straightforward and tighter plot that was just set in Wakanda. Instead, T’Challa finds himself caught up in some James Bond moments, including the token casino showdown and a riveting neon soaked car chase through Korea. The one highlight of this segue is that it allows the two main Caucasian actors to shine, to a lesser extent Martin Freeman, hamming it up with an “American” accent but more specifically Andy Serkis reprising his role as warmonger Ulysses Klaue.

Serkis’ performance is next level and lifts the acting and performance of everyone around him. It’s a shame he’s only in the film for part of it, because he exudes a charm and maniacal ‘unhinged’-ness not dissimilar to Heath Ledgers Joker. His loose disregard for authority, mannerisms and straight shooting violence gives this otherwise family friendly movie a much needed dose of action and mixed with an amusingly sarcastic South African accent is all the more watchable. 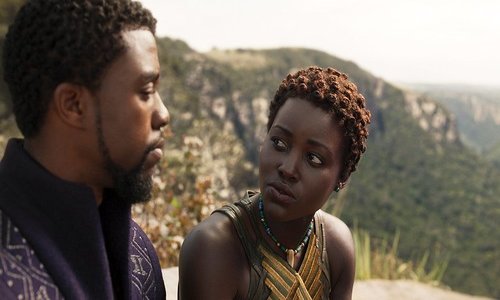 Much like Thor last year, Black Panther learns from previous movies in the Marvel universe by treading a fine line between violent action, humour, silly stunts and over the top CGI. Black Panther embodies the magic of Doctor Strange but has a personal redemption story not seen since the very first Iron Man. It is actually fitting that the same motives that set up Tony Stark as Iron Man in the very first Marvel movie would be mirrored to an extent in T’Challa before all hell breaks loose in Infinity War.

More importantly, Black Panther is a well-rounded family movie as the King of Wakanda is surrounded by his mother (Angela Bassett), his sister (Letitia Wright), personal guard (Danai Gurira) and supportive friends. If Guardians of the Galaxy was a misfit family of orphans then perhaps Black Panther has trumped all of them as the newest, richest, youngest leader of the Avengers and the world.

Even in the most breakout of films, even with a world-class soundtrack that includes Kendrick Lamar that changes as different characters appear on screen, even layering in all the different accents, native tongues and subtitles Black Panther is not perfect. With shows like Black Lightning already out and Luke Cage beforehand, Black Panther oddly seems late to the party. The costumes are loud elaborate and straight out of a Broadway musical, and yet it does feel at points that the actors are simply going through their lines.

Director Ryan Coogler grounds Black Panther in many sweeping shots of the African jungle, waterfalls and outlying villages but the illusion is broken for every CGI coloured sky or green-screen shot where the actors are clearly not on location. It undercuts again, what is perhaps the most visually arresting of the Marvel movies that doesn’t degenerate in to a mess of CGI like the more recent Guardians, Doctor Strange or even Thor’s big bad.

For discerning viewers the logical conceits of Wakanda’s existence are stretched a little thin – as what is initially explained as city hidden in plain sight, also seemingly has a massive mine to the middle of the earth somewhere nearby, another city up in the mountains as well as many outlying provinces with very obvious animals that don’t belong. Exactly what has Wakanda been doing with all those ships, weapons and tech since its inception, what is the point of all of it, if they share with none and if Serkis’ Klaue knows about it,then how is it others don’t? (although the Avengers got mighty close in Age of Ultron)

These leaps in logic though, are hardly the point as in many of Marvel’s movies as the more fantastical elements of the plot give way to a more grounded reality that Wakanda, and Black Panther now need to deal with. Not much has been said of Michael B. Jordan as the antagonist Eric Killmonger as he exists only to close off some loose long standing plot threads as well as act as the catalyst for the civil war bubbling along in the background, any personal connection to Black Panther is token and not much of a shock or reveal due to some obvious writing and contrived backstory.

Grounds the movie in African culture and language
Visually stunning film, costumes and vista
Music mixes classical with contemporary hip hop
The main antagonist is underwhelming and obvious
Some of the acting is never as good as Andy Serkis’ Klaue
Some bad CGI backgrounds at odds with on-location settings 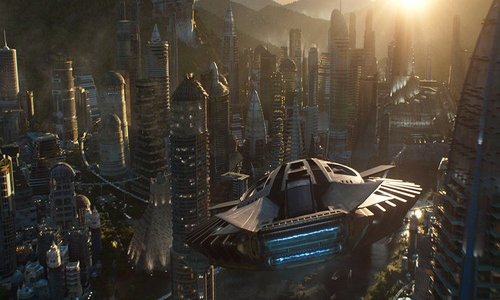 The net result is that Black Panther is a success. It succeeds on the strength and fun of the cast, the larger than life costumes and mythical African setting. Touching on just enough family values it single handily does what other heroes like The Phantom never could. After so many of the same contrived movies that have recently mixed things up with directors, humor and cinematography, Black Panther takes the crown as King albeit for how long, remains to be seen …

This author paid to view the movie
Official Site