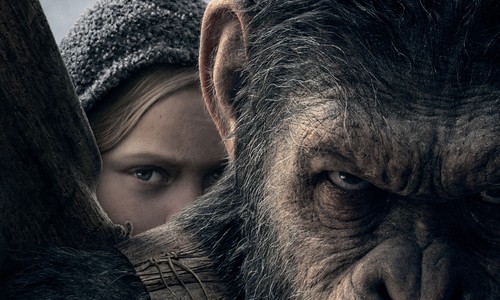 This close to Christmas, there are a dozen different movies and DVDs to either buy, consider watching or catch up on. One of the highlights at this time of year is the number of excellent box sets to dig into, with a chance to revisit one of the best movies to come out this year.

20th Century Fox’s 2017 War For The Planet Of The Apes, is joined by the previous two; Rise and Dawn to fill out a trilogy of content across both Blu Ray+ Digital HD highlighting enough bonus features and narratives to almost govern another set of discs. Not quite to the extent of The Lord of the Rings or Hobbit length Planet Of The Apes is one of the best box sets for money this year, with three of the finest classical pieces of mythology to grace modern cinema.

In 2011 if someone had said that they were going to remake Planet of the Apes, contemporary, and set prior to any sapiens uprising, starring John Lithgow opposite James Franco and with Malfoy from Harry Potter…well that idea would be dead in the water. Rise of the Planet of the Apes works though, in part because of the gravitas and theatrics of the actors. Framing the film around animal cruelty and animal testing of viruses is interesting enough and in another film may have been the basis for a horror or next great zombie movie.

Making it about the cure for Alzheimer’s and John Lithgow’s performance pre- and post-cure as well as James Franco’s ability to throw himself into any character- seals the deal. Set over 8-10 years Rise works as a stand alone movie, but nods towards the more Shakespearean sequels and also the progression of time evident in all 3 movies. 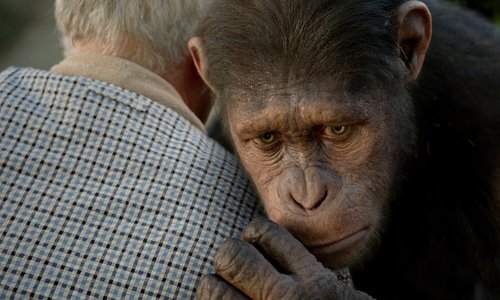 Gary Oldman and Andy Serkis as Caesar headline the second movie of the trilogy which once again stands apart on its own. Dawn builds on the first movie but is also a soft reboot, once again jumping forward in time and pushing technology in regards to motion capture.

Dawn of the Planet of the Apes is the movie Andy Serkis always wanted to work on. sans Lord of the Rings, Dawn is what redefined motion capture as motion performance with actors physically acting out all aspects of the apes including detailed facial animation rigs and movement, not just alone but on horseback and in action.

As a sequel it also bears the burden of establishing the internal logic and rules that govern the world, including a technical and detailed hierarchy of gorillas as working class, pack mule grunts easily manipulated and cooped by the humans for their own purposes and the lone orangutan as the eldest and wisest.

Theatrically though the movie further bucks the trend by establishing an entire ‘ape dialect’ both sometimes spoken, gestured or otherwise in sign language. This is further built on in the sequel War but adds extra layers when watching to what is otherwise a standard action adventure movie. Having half the film unspoken and in sign is not for everyone, but further emphasizes the standout performance of the ape actors.

You only need to Google ‘Dawn of the Planet of the Apes + Shakespeare’ to see articles written on how the movie conforms to a Shakespearean tragedy. Caesar himself is so named after Shakespeare’s play of the same name and the following sequel War only adds fuel to the tragic fire that burns at the center of this opus. 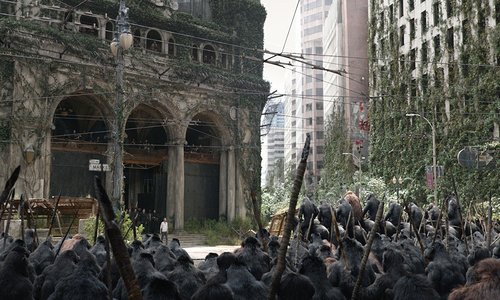 If the grand finale in this series feels vaguely familiar it may be because in many ways it mirrors the excellent X-Men film Logan thematically, that also came out this year. That is to say that Caesar’s character arc in War for the Planet of the Apes, his motivations and the resolution are all very similar but for all the same, excellent reasons. And yes, just like Wolverine he does spend much of the time with a young female in tow who is unable to speak.

Where this movie diverges from just another action or superhero flick, is the personalization and sheer drama that has been captured in both the acting of Andy Serkis and Cesar. War is brooding, slow, quiet and tortured.

The middle act of the movie eschews the war theology and instead opts for outright crucifixion. There is some poetic justice that the same virus that was originally released is now dehumanizing mankind, devolving them to the point of the apes, but this is a sub point to what is a stand out and mesmerizing performance from a character that, on screen, is not even real.

As the movie ended, the person I was seeing it with simply stated “That was the story of Moses from the Bible & the exodus of Egypt”. This take away is what elevates the movie to something not normally seen any more in cinema, along the veins of Lawrence of Arabia, or the original Ben-Hur. The classically and pseudo religious motifs are what underpin an understated and under-appreciated hit. 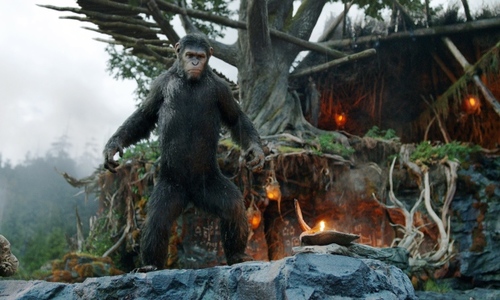 Rise on it’s own is a great film that reinterprets Planet of the Apes for a new generation and is just a generally good science fiction film about the hubris of man that is inside each one of us. Dawn as a sequel and the middle movie, loses some of the luster, trying too hard to reestablish the universe and also being an all-out action, adventure piece. This is rectified with War showcasing the full potential of Weta Digital and Andy Serkis’ pioneered performance capture.

Surprisingly, these three films offer something for everyone including action, drama, thrills and science fiction. The investment of time is well worth it setting a benchmark for 2018 and beyond.