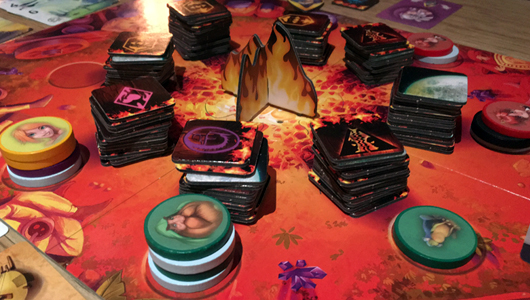 Nomads is a tile drafting and set collecting game, or as the theme of the game would desperately try to make you believe, a game about collecting stories and writing legends. The premise of the game is that heroes – players – are gathered around the campfire to listen to the tales of the mysterious nomads. This set up is recreated on the game board, 3-D cardboard fire and all. The tales are told through players picking up square tiles and spending those of the same type to buy point cards. The end of the game is, indeed, a tale as long as time: the player with the most points wins.

Nomads, without a question, is a very whimsical beautiful game, immediately lighting up any table it is put on. It has warm, campfire colours, fantastical characters, and cards, each set containing one story, told through a developing series of images. However, as much as it tries to focus on the aspect of storytelling, even including a chapter of the main heroes’ adventures with the rulebook, it is hard to fit that theme to a tile drawing game. In fact, there are parts of the game, where you may wish that the designers let the story theme go. There is an abundance of thematic terminology within the rule book that makes understanding very simple rules, quite difficult. Sometimes, it is better to say ‘buy cards’ in the rules, instead of ‘writing legends’, just for the sake of your players. Especially, since pushing that angle, makes it feel as if there was a lack of confidence in what is the strongest part of the game – its mechanics. 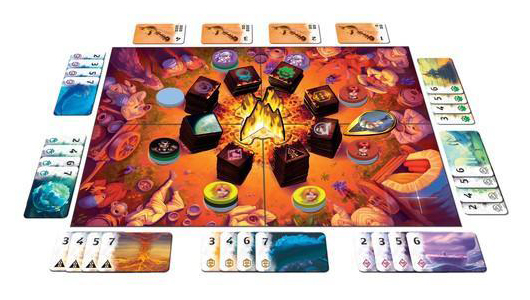 For a very simple drafting and set collecting game, Nomads has a lot of little interesting a surprising elements. First of all, it does very well to keep all players involved at all times. The main mechanic of the game is distributing round tokens around the stacks of square tiles so that only those circular tokens that land on top of their stacks will be rewarded with a square tile. That gives a high chance for other players, not only the active player, to be able to earn tiles during the round. However, at the same time, giving excellent opportunities for players to block their opponents from getting the tiles they might want. There is almost always a choice: make a move that will benefit you or that will prevent one or more of your opponents to pick up the tiles they want. Games that take advantage of this tension, always have more compelling gameplay, and Nomads is no exception. This bit of strategy balances well with the randomised nature of the square tiles. 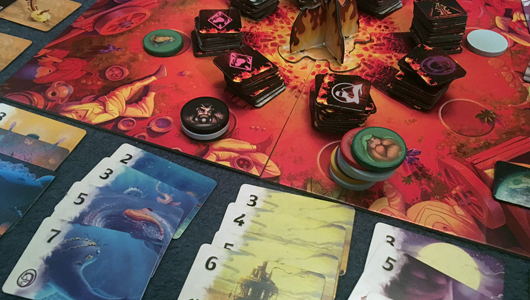 Second of all, there are several scoring rounds throughout the game. They are triggered by building all four pieces of the moon, that are located randomly within the stack of square tiles. During the scoring, players add up all their points from the cards they were able to purchase and subtract the number of square tiles that remained unspent. So when three pieces of the moon have been collected, it is a good sign, that players should start spending their tiles to buy cards, as not to get penalised so much. It is, again, a good strategic move. One might decide to trigger the scoring round upon seeing that one or more of their opponents are stockpiling tiles without spending them. Their opponents, in turn, might try to prevent them from picking up the last piece of the moon. Careful calculations always have to be made. At which point scoring is the most beneficial? There is a great deal of player agency and strategy in the allowing players themselves to decide when to be scored. The only downside to this, is that the game does not provide any means, point tokens or scoring sheet, to keep track of the scores. Players will need to arm themselves with pen and paper before playing the game. 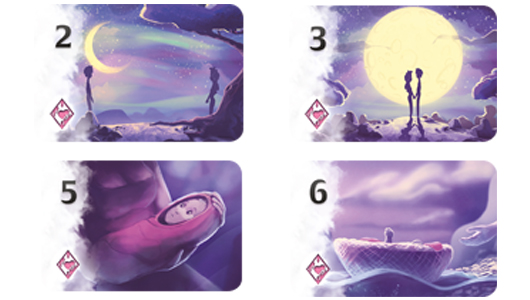 Finally, each player takes control of one of the characters in the game. With their backstory provided in the rulebook, each character has their own special ability, reflecting their in-universe story. All special powers work together quite well in a full five player game, however when downsized to a lesser number, some of them prove to be more powerful than others. For examples, Red, who at the end of his turn can put his red token on top of every stack, is not as powerful with a lot of players as the number of people decreases the number of times his ability can be used. In a two player game, however, his power gives an instant advantage. While other characters also have useful tricks up their sleeve, their abilities will not always pay off every round, whereas Red’s does. If in a five-player game, this can be subdued through the sheer number of people playing, the same cannot be done in a smaller game. The rulebook does not give advice on which characters should be chosen depending on the number of players.

Nomads strength is in the balance between its luck-based elements and strategic decisions, the tricky part of any board game design to get right, but that feels effortless here. While the game theme, despite all the efforts, still feels tacked on, it by no means diminishes the fun of the game. It is challenging, yet simple and approachable. It is joyfully colourful and does not take itself too seriously, while allowing players to approach its gameplay in different ways, suited to their own play style. Nomads might not be able to give a magical storytelling experience, but it will definitely give you a really good time.