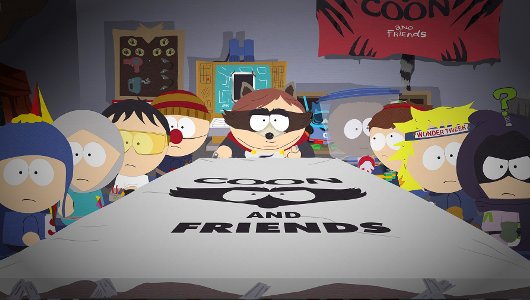 Following on from the acclaimed South Park: The Stick of Truth in 2014, TFBW remains refreshingly unique: a AAA, 2.5D action role-playing game. Playing as an unnamed new kid to the world of South Park and thrown into relationships between the various characters the game is as much about navigating these wayward lives as it is about farting, fighting, laughing, looting and generally running all over the famous town.

Despite numerous delays and a production curtailed by the release of the actual South Park show TFBW follows on directly from the first game. Cartman has decided he no longer wants to play ‘Fantasy’ and instead plays ‘Super Heroes’ becoming “The Coon” who travelled back from the future to stop the world from being destroyed. This prompts everyone to switch sides, switch costumes and generally convene to discuss how their two respective franchise plans will play out in an effort to take over the world ala Marvel with the most number of profitable superhero movies! Cue Civil War!!

Narratively TFBW is a lot tenser and in some ways unsettling then Matt & Treys’ previous attempt. If The Stick of Truth was a game about unity, a band of brothers overcoming the odds on a quest to discover who they are, TFBW is a divisive, bitter tale of confused gender equality and identity that changes pace multiple times, is too long and then just drops off suddenly. 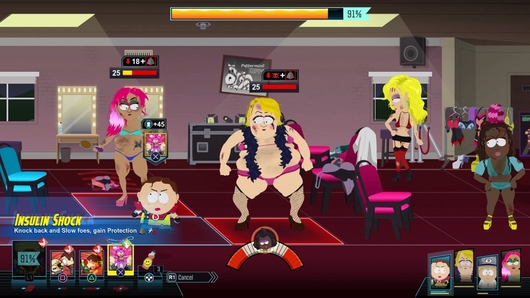 This time around South Park is not playing it safe, doubling down on racism, nudity, sexism, drugs and many, many meta-narratives about gender fluidity and homosexuality. This is actually built into the gameplay encouraging the player, in true role-playing fashion to build their own religion, sex, sexual orientation and racial upbringing as the game progresses. The game is structured over many days, with special missions occurring at night time and whilst is diverges into some truly odd and overly long side stories is wrapped up in the culmination of Civil War II & III.

To their credit, the directors have attempted to almost write a whole season here, wholly interactive and playable by the player, however this means that like many seasons comprised of filler and standalone episodes the story takes many tangents before getting back on track and while the cut scenes are top notch and the jokes are generally on point and hilarious, the gameplay becomes structurally repetitive and slightly boring compared to the actual story it wants to tell.

One of the more developed areas that have changed since the first game is combat, which is now wholly turn-based and built around lanes in a grid configuration. Characters can move forward, backwards and diagonally in the lanes, however, they may not be able to attack if blocked or the map is obstructed. It’s a neat mechanic and one that allows for a lot of variation. Character class customization riffs on common tropes like Elementalist or tank.

Each of the South Park kids is well realized as their respective superheroes and for longtime fans in the know, this is where the game shines – actually allowing you to control not just the new kid in combat but all the other characters, using a combination of light and heavy attacks with knockback or poison effects, area damage and amusingly over the top specials. As the game goes on combat becomes ever more crowded and distorted fighting a large variety of homeless people, strippers, under-age Hooters girls (called Raisins) and the occasional bosses.

There are also two very large Boss Battles against unique enemies, singular characters that you will have to work together to bring down, that take up the whole screen. While you can revive fallen enemies, heal and cast healing spells these two enemies are both difficult and highlight the main issue with the new combat system.

Because the game sticks to 2 dimensions and because the battles are both seamless but required to fit within the world, usually occurring on the street or on the road, the area to fight is usually small, the grid long and the space filled with characters, making it less about moving and strategy and more about spamming the most damage. There is some skill in knockbacks or running ‘through characters’, timing heals and specials but the combat is not very complex meaning that the two extra-large bosses that take up half the screen leave little room to do anything strategically useful. 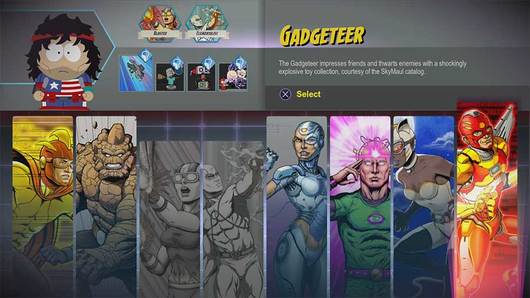 Outside of combat, the world of South Park Colorado is large enough that it takes time to traverse and explore but by the end not so large that it starts to become repetitive. There are ‘fast travel’ points but these involve cutscenes and are not evenly spaced. Many times my new kid would be on the other side of the map and be called home or back to base meaning I had to drop everything and go backwards and forwards. Large parts of the map are locked out for about half the game, and yet there is nothing extra to facilitate end game content due to the over-simplistic play style and details.

There are a handful of side missions that involve going somewhere and fighting something and a large list of tick boxes, achievements, and puzzles based around different farting mechanics to unlock, and using every, single, toilet in South Park – resulting mostly in loot such as costume pieces, new hairstyles and different helmets. Just when you think South Park has taken farting as far as it can go, your character will unlock a new ability such as having a gerbil climb in his butt to singularly fart into electrical circuits- effectively hacking (and killing the poor minion gerbil) 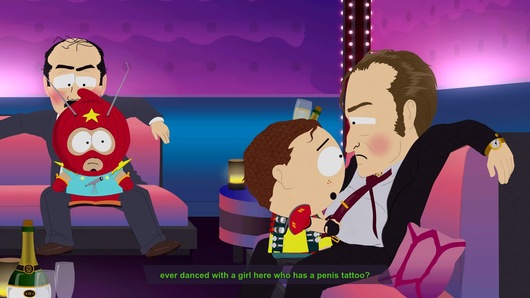 Ubisoft has assisted with publishing again and now, more than previously it feels like their stamp is all over it. The Ubi Club offers a variety of unlockables out of the gate including a cute Assassin’s Creed outfit and a large number of buffs and level increasing powerups that make the game easier than it should be. The game is already not very difficult. The assault of different costumes and the promise of DLC is becoming ever more pervasive.

So much so that even at the end of the game Ubisoft San Fransisco have built in an entire section and map (called Canada) to the game that is…empty, devoid of anything except a large wall and the promise that more DLC will follow. In hindsight it is jarring that this whole section of the game simply feels unfinished, mocking you that there is nothing to play here.

Still, want more South Park? Well if superheroes weren’t enough South Park: Phone Destroyer is currently available for iOS and Android and starting with Cowboys vs Indians degenerates into a real-time action card battling game of cyborgs, zombies and everything else they couldn’t fit into their other games. With multiplayer PvP as well as a wholly unique story-line it is hard to tell if this hurts the development of TFBW.

South Park has to be seen to be believed and everyone should try it, at least once. TFBW is long, linear and outrageous but the humour, visual gags and writing are consistently great throughout. Apart from the very end where it doesn’t know how to wrap up the myriad of plot points, the logical gameplay is fun, creative and refreshing.