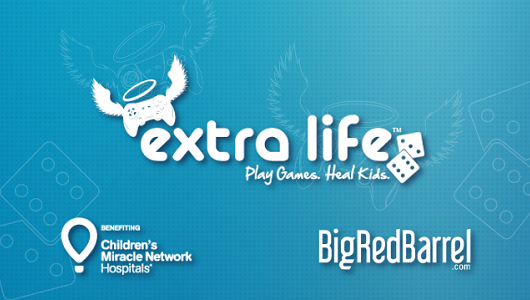 Extra Life has been around since 2008 and in that time, gamers from around the world have raised more than $30 million for sick and injured kids in its name. Team BRB is proud to be a small part of that and is ready to do it all again this year!

For the uninitiated, Extra Life is a 24-hour gaming marathon which aims to raise money for sick children. There are kids out there who have to battle for their lives every day – be it against cancer, disease or all manner of terrible injuries. If we can do anything to help, we here at Big Red Barrel feel it is our obligation to do it.

This year, Game Day is taking place on Saturday, 4th November. We hope that you can join us and would be extremely grateful for your support. The Team BRB page is here, with all proceeds going to the Children’s Miracle Network of hospitals to help kids who desperately need it!

The Big Red Raid returns, with an attack on the space rhino version of Trump Tower. This will be taking place again on our Twitch channel. Also, the Delivery Service Transit Van Showdown in Forza will also be making a return. You can check out the staff’s individual channels below and support us if you can.