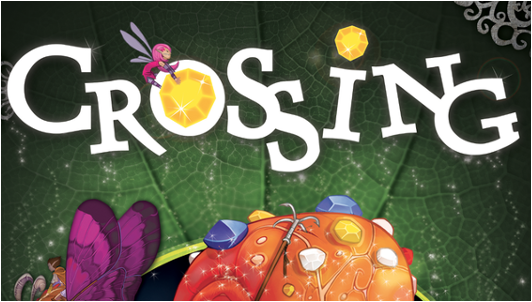 What’s your favourite thing to do with mushrooms? Maybe it’s frying them with a little garlic and butter, admiring how they brighten up a woodland, or noming them down whole to grow to twice your size and become more resilient to damage. Of course, all of these are wrong and Crossing tells us the correct answer is pointing at them. Let’s find out why…

Crossing is a game of pointing at mushrooms! You’d almost struggle to even call it a game and perhaps that is why i find it so endearing. Because despite barely seeming like you can call it a game it absolutely is one. And mostly that’s because there just aren’t quite enough mushrooms to go around. 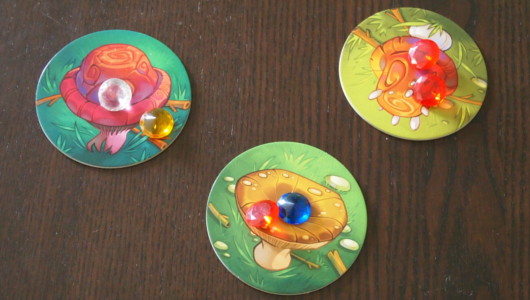 This is the set up for 4 players. You only have 3 mushrooms and… oh did I forget to mention the gems? That’s the best bit about pointing at mushrooms! They give you gems! When playing Crossing everyone simultaneously points at a single mushroom and, if you are the only person pointing at that mushroom, you get to take all of its gems into your personal stash. Buuut we’ve already seen that there’s one too few mushrooms for everyone so immediately you guarantee two of your friends will point at the same one, and that means neither of them gets any! It’s immediately funny when two or even all of you get nothing at all and that starts right from the first round.

But later rounds get even better! Because as soon as someone has grabbed some gems they get placed on their player card, but that makes them a viable target. Point at their stash and if, as usual, you are the only one doing so you get to steal all the gems they have collected. Naturally, this feels great! 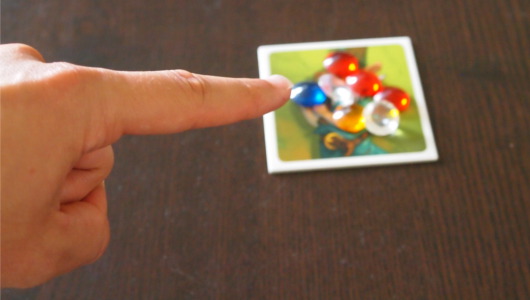 It can also be defended against. As the owning player you simply need to point at your own collection and, even if others have tried to steal from you, your gems are snaffled away back to whatever gem and mushroom filled hovel you call home. Or with all those gems should that be palace? Anyhow, simply securing any gems you collect is not the best play, for two reasons. One, you could be collecting more gems instead, much more efficient. And two, when you secure your gems, you flip your player card to the night side and miss the next turn. Securing too often leaves you missing far too many turns… but maybe that’s safer than having your gems stolen?

Crossing is all about these impossible calls, balancing greed with the possibility of getting and losing everything. You can have a tempting pile of gems, risk grabbing some more and have two or more of your opponents try and steal from you at the same time, blocking each other and leaving your stash safe as you add even more to it. Or you can end up blocked on a mushroom and have just one opponent point at your stash, making off with the whole lot and leaving you with nothing! Both of these outcomes are, obviously, hilarious. 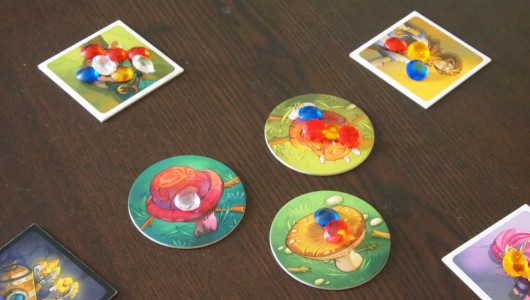 In Crossing you’ll always end up crossing paths with your opponents, and getting nothing. It’s borderline dumb luck whether you get that big pile of gems this turn or whether someone else goes for it too. Or maybe it isn’t! There’s enough agency that you do believe in the importance of your choices, enough that you feel stupid when you take a risk and get a bad ‘shroom. And that is why it proves so funny. You’re always laughing at your opponents’ mistakes (or poor fortune) and bemoaning your own. Always celebrating your big wins while everyone else cries in frustration! It’s what makes Crossing stupidly entertaining.

Super easy to learn
Hilariously stupid results almost every round
Endlessly entertaining
Maybe too simple for some?
Mushrooms? Why…?

Crossing is without doubt the stupidest brilliant game I’ve played. I mean it’s pointing… at mushrooms. But that just gives rise to endlessly silly situations too. Unending, head shaking regrets. Ridiculous peels of laughter. And any game that gives you this much fun for so little time and effort is one that deserves to be played!