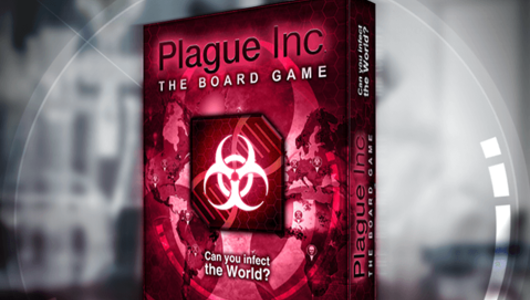 Plague Inc. is the board game translation of the mega-popular app of the same name, wherein one plays a disease whose goal is to infect and eventually kill every human being on earth. The theme is strong: evolving your disease from the night-time sniffles to haemorrhagic hyper-Ebola is the epidemiological equivalent of a rags-to-riches story. Annihilating humanity is a satisfyingly immense accomplishment and a vent for misanthropy of the Bender-from-Futurama variety. So, the game succeeds and fails largely on how well its mechanics bring out the interesting aspects of the apocalyptic theme.

The board represents the world, divided into continents, with individual countries represented by country cards. Players draw country cards on their turn, either from an existing pool of three face-up cards or randomly from the top of the deck, a la Ticket to Ride. They can then either play the card onto the board, opening up a new country to be infected by any player, or they can discard it to draw a new hand full of trait cards. Countries have size (India has 8 spaces to infect, Panama only 2), climate (Brazil is hot, Sweden is cold) and adjacency (countries on the same continent are adjacent, sea and air ports link countries together). The map is thus ever-changing as new countries are placed, and eventually, wiped out.

Each player begins with a generic disease, either a bacterium, which provides bonus DNA points, or a virus, which can mutate in powerful but uncontrollable ways. Once countries have been placed, players can then evolve their diseases by filling evolution spaces with trait cards from their hand. These are purchased with DNA points, which function as the in-game currency, as well as being the scoring mechanism. These new traits can make a disease more lethal, more infective, more easily transmitted, or resistant to extreme climates. The cost of your remaining traits is refunded at the end of the game. Once your limited spots are filled, new traits must overwrite old ones. 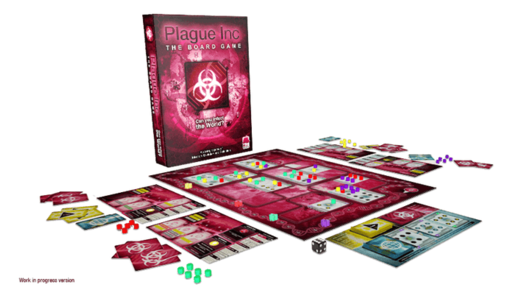 Once players have used a country card and evolved their disease, they must infect countries adjacent to their existing disease tokens. For each point of infectivity, one new token can be placed, allowing the disease to spread to new countries. The objectives of infection are to occupy spaces, to take control of countries by having the most tokens, and eventually to destroy them entirely. When all spaces in a country are filled, it is at risk of destruction. At the end of a player’s turn, for every country they control that is fully infected, they roll the death dice (sic, lamp-shaded in the manual). If they roll a number equal to or lower than their disease’s lethality, the country is wiped out. DNA points are assigned to each player according to their tokens in that country. The card is kept by the player to count towards the “continent killer” bonuses at the end. They also get to draw an event card, which provides a unique one-use ability.The mechanics work well enough to make for an hour of infecting, evolving, and eradicating. The game plays reasonably well with two players, better with three or four. (The single player game is an entirely different experience against an automated opponent, and so I haven’t taken it into account for this review.) However, the game didn’t really grab me, and despite some reasonably fun experiences with it, I find myself wishing they had made some different design choices.

The mechanics work well enough to make for an hour of infecting, evolving, and eradicating. The game plays reasonably well with two players, better with three or four. (The single player game is an entirely different experience against an automated opponent, and so I haven’t taken it into account for this review.) However, the game didn’t really grab me, and despite some reasonably fun experiences with it, I find myself wishing they had made some different design choices. 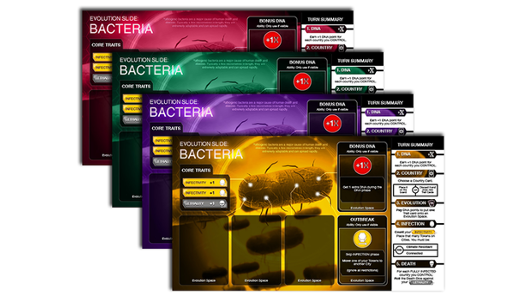 This is a “snowball” style game: DNA points allow you to make your disease stronger, which allows you to infect and destroy more countries, which earns you not only more DNA points, but also country cards for final bonuses, and event cards to cripple your opponents. There are few catch-up mechanisms, especially in the two-player game. A small initial advantage can turn into an inevitable victory, which is not a very entertaining experience for the other player(s). If the cost of evolved traits was not refunded, then there would be an inherent trade-off between developing a deadlier disease and accumulating DNA points. But as it stands, there is little incentive not to simply develop the most powerful disease you can. The traits that can be evolved are mostly gated by the DNA points you have available and the luck of the trait cards drawn, rather than deep strategic decisions about the future direction of your disease. The cost of discarding early game traits, with a typical value of 2, for strictly-better late game traits worth 15 or more, is very low. You want to run as far and fast as you can, and the further ahead you get, the further ahead you’ll stay. Not every game has to have Power Grid levels of position jockeying, but I would have appreciated more opportunity for comebacks. The three and four player games mitigate this somewhat because front-runners become targets for event cards.

The blocking and area control elements seem underpowered. Ideally, the different climates and transport links would encourage adaptive game play and give players behind in the game an avenue to pursue. In practice, it mostly allows players with an early lead to cement their advantage by expanding into countries that other players can’t follow them into while also retaining most of their ability to contest neutral climate countries. Lethality could act as a balancing system, where lethal diseases wipe themselves out too quickly. But the advantages of gaining more DNA points and event cards are so large that there is little reason to worry about being too lethal, at least before the final turns. Infect widely, kill quickly, and leave beautiful corpses in your wake. 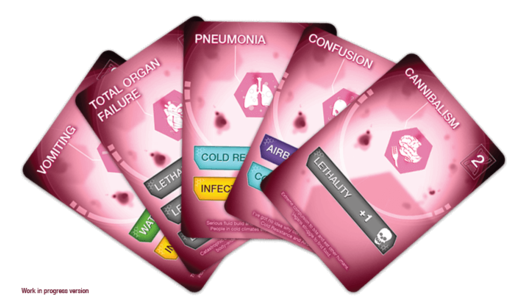 In the app and flash game versions, infectious impulses were frustrated by humanity’s attempts at disease control. A strategy that was “too effective” at infection and lethality attracted attention, including from the infamously paranoid Madagascan port authority. Insofar as humanity’s feeble attempts at resistance are implemented in the board game, they are on event cards, which are earned by eradicating countries, and which can be used on your opponents. To translate into flavour-speak: If a disease becomes too lethal, the world’s governments will focus on eradicating other diseases, for reasons unexplained. The mechanics contradict the flavour, and that holds the game back.

Neither do the country cards make sense in terms of flavour. Why do countries open up one by one? Why are they not all on the board at once? How is even conceivable that India could be utterly wiped out by disease before even a single person in Pakistan is infected? How can a continent fill up with countries, thereby preventing you from placing a new one? (!?!) As a mechanic, it works well enough, but it feels very gamey. Given just how much this game leans on the theme, this is not a small problem. If nothing else, having the whole world open to infect from the beginning might have added some grand strategy to disease evolution and spread. The lack of Risk-like global competition elements is a missed opportunity.

Plague Inc. is an exercise in top-down design, an attempt to make a board game that looks and feels like the app, rather than one where the theme reflects and reinforces the mechanics. It feels similar to – and is not obviously better than – 2014’s Pandemic: Contagion, with which it shares both a theme and several major mechanics. (Perplexingly, that game was criticised for free riding on the Pandemic brand, whereas for Plague, Inc., the brand is a major selling point.) I don’t know if this is convergent evolution or inspiration from similar sources, but in either case, it doesn’t seem like a big advance on what was already available.

So, why should you buy this game? I’ve been a bit of a downer on the game because it fits badly with my own preferred design philosophy, but it’s not as bad as all that. The biggest draw is the theme, and if you’re a big fan of the app, or just love the flavour of infecting the world, then you’ll like Plague, Inc. It’s an easy game to teach, and players can make meaningful decisions even during their first game. It doesn’t take too long to play and isn’t particularly expensive. There is a satisfying arc of infection, from a humble start, blossoming into a global pandemic, and eventually the final push to kill the dwindling survivors. You can have a good time with it, and I’ve enjoyed at least some of my games, especially the ones with 3-4 players.