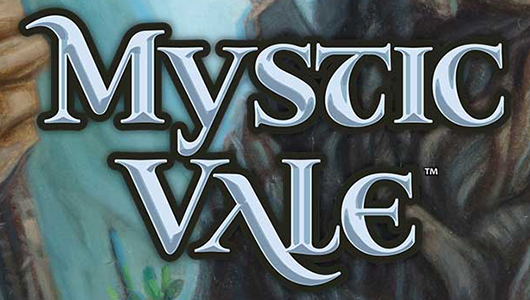 Mystic Vale provides an innovative twist on the deck-building genre with a novel card-sleeving method, smooth mechanics and superb artwork, but a lack of player interaction hampers what could have been a brilliant game.

I enjoyed Collectible Card Games back in the mid-1990s but always found them to be an ever-increasing money sink. Then, in the early 2000s, I was introduced to the Living Card Games produced by Fantasy Flight Games. I loved them for their “game in a box” approach, which meant I didn’t have to spend a fortune on assembling a working deck and always knew in advance what I was buying. Finally, I discovered “deckbuilder” games such as Dominion and Legendary, which also followed the “game in a box” approach but relied on players gradually assembling a deck over time to grow more powerful rather than by playing lots of cards to the table that remain in play. Mystic Vale follows in the footsteps of these well-established titles with a major publisher behind it and brings the innovative Card Crafting System to the genre, but it falls short in some obvious core gameplay aspects that leave me frustrated at what might have been. 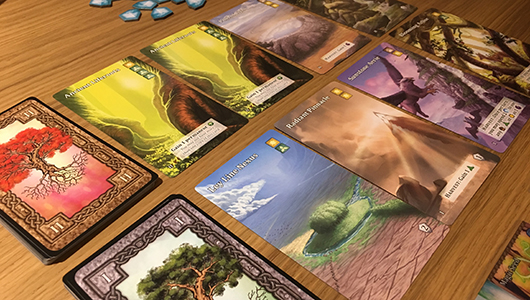 The premise of Mystic Vale is that players are magical druids in a fantasy land, trying to restore order and harmony to nature after a curse has been placed on the Valley of Life. They do this by collecting spirit totems, blessings and other powerful natural forces to reclaim the “Mystic Vale” and restore it to life. All of these are beautifully illustrated with hand-painted images by the artists and they conjure up a wonderful sense of the natural world, even if they are often squished into only 1/3rd of a card. Think of a green deck from Magic: The Gathering in appearance and you won’t be far wrong in visualizing the artistic style. Some people have complained that the theme lacks depth, but I find this an unfair criticism. Mystic Vale may not have any lore behind the cards or in the rulebook, but it doesn’t make it a weak game.

Each player starts the game with a deck of 20 cards. The clever twist of Mystic Vale is that players will never add to this number. Instead, they add enhancements to the cards themselves and “craft” them in whatever way they see fit. Each card can hold up to three advancements in either the top, middle or bottom positions, which are added by sleeving them in a clear plastic pocket. Advancements are not allowed to overlap in the base game, so players must choose which powers they add wisely. Whether it is better to have a smaller number of powerful cards or a wider spread of advancements across a larger number of cards is a decision that a player has to make every turn. Different advancements can interact with each other to provide bonuses, with higher-tiered advancements providing a greater benefit if a player has left enough room for them later in the game. It is similar to Gloom in some respects, but feels sufficiently different to provide a fresh twist in a game of a totally different genre.

The game relies on the concept of Mana to spend, rather like M:TG. However, the amount of mana that a player has available varies on each turn. A player’s turn starts in the Planting phase in which they must decide whether or not to push their luck for more mana, or whether to make do with what they have. At the start of a round, a player is only allowed to have three red-symbols showing in play (including the top card of their deck), which represent “Cursed Lands”. They can draw their third red symbol from the top of the deck, which always gives them an extra mana, but must then flip over the top card. If this shows a fourth red symbol, the player spoils, discarding their cards and missing their turn. If the top card does not show a red symbol, the player can choose to push their luck again until they either decide to stop or a fourth red symbol finally shows. It’s a nice idea that allows players with weaker cards an opportunity to catch up and purchase some higher-powered abilities, or for others to establish a more dominant position in the game. 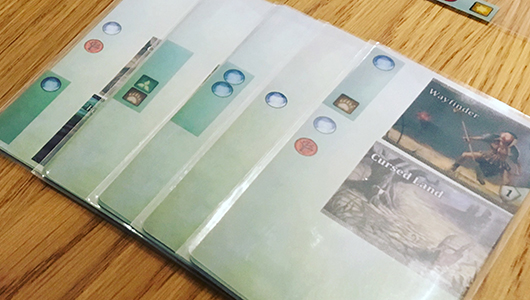 A player then purchases advancements in the Harvest phase using the mana generated from a common field of 9 cards available for anybody to purchase on their turn. These advancements might in themselves generate more mana when added to a card, provide magic symbols to allow players to purchase cards from the Mystic Vale, or provide other bonuses such as cancelling red symbols, or award the player victory points. Some advancements offer big bonuses, but in return for extra red symbols and the risk of spoiling. Cards purchased from the Mystic Vale provide bonus effects each turn and / or victory points at the end of the game. The deck-building core of the game works very well and there is a genuine feeling of progression as the game unfolds, with players able to swiftly see the results of their crafting efforts owing to the limited deck to draw from.

Once a player has finished purchasing advancements and Mystic Vale cards, play passes clockwise to the next person and continues until the Victory Point Pool has no tokens left in it to take. The number of players in the game determines how many victory points are available to win from the pool, but these are not the only way to win the game. Many cards have point values: sometimes immediately awarded, other times at the end of the game only. The winner is the one with the most points at the end of the game. It’s simple, clean and easy to explain, if a little repetitive in the playing. The mechanics work really well most of the time, which makes my biggest gripe with the game all the more infuriating. There is almost no player interaction at all.

Unfortunately, in playing Mystic Vale, it feels as though each player is playing their own solo-game against the system rather than against each other. There are no cards that interact with another player’s cards in the base game, which I find to be either an incredible oversight or a really poor design choice. Certainly, it means that nobody is going to wreck another player’s carefully-crafted mana engine, but it also stifles interest and sociability in a game. Two player games pass off in near-silence, while four-player games result in people sitting out waiting for their turn to come round again with minimal interest in the ongoing game because there is no fear that anything could happen to them. The worst that anybody can do to another player to thwart their plans is to buy a card that they think an opponent might want. Some of this has been corrected to a limited extent in the Vale of the Wild and Vale of Magic expansion packs, but I find it a bit cheeky to only offer something as basic as interaction in a game only after buying a £40 base set and a £25 expansion on top of that. 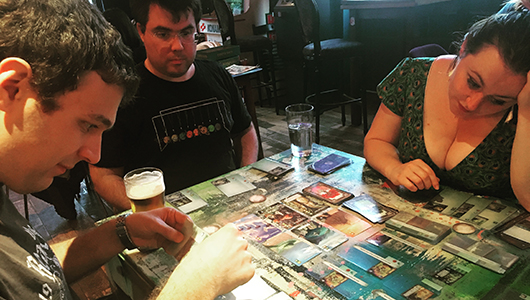 Frustration sets in among players left behind, with little they can do to catch up

Others in my regular game group have expressed frustration that there is little that can be done once a player has established an obvious lead over the others, and in part this is due to the lack of interaction between cards. As each player is playing against the system, all that can be done is to try and enhance a player’s own mana-engine rather than go on the offensive and try to take down an opponent’s. This leads to often vastly-mismatched scores at the end of the game and to frustration in those left behind. The repetition in the game can also get a little wearing, both in the mechanics and in the cards themselves. There is a lot of duplication among the advancements, with each particular power or totem appearing at least three times in the base game in either the top, middle or bottom position, which reduces replayability and makes games feel fairly similar every time. AEG are expanding the Mystic Vale line with expansions, but time will tell if these will truly add enough variety into the gameplay to keep it interesting and give it that “wow factor”.

If you’re a fan of deck-building games, Mystic Vale is definitely worth a play. With only 20 cards to potentially draw from, you will see the results of your card crafting skills several times over in a game and this is a satisfying experience in itself. The card sleeves are of good build quality and the advancements are also built to last, being made of a stiff plastic that still allows the beautiful artwork to shine through. It’s a quick game to explain to new players and lacks any complex rules that could slow the gameplay down. Whether this simplicity and innovation is enough to make up for the game’s significant flaws is another question altogether and I doubt Mystic Vale will end up being the centrepiece of anybody’s gaming evening as a result, which is a shame when considering that there is much it does well.

Mystic Vale is a game that I started with high hopes for, but over time my initial excitement has dimmed somewhat. There are flashes of excellence with the Card Crafting System, which truly brings something new to the deck-building genre and is a feature I expect to see replicated in other games in the future. The artwork is superb and the game mechanics work well, even if a little repetitively at times. Unfortunately, it feels as though AEG have overlooked some of the basics in producing a card game and a complete lack of player interaction is an unforgivable design flaw in a tabletop game.