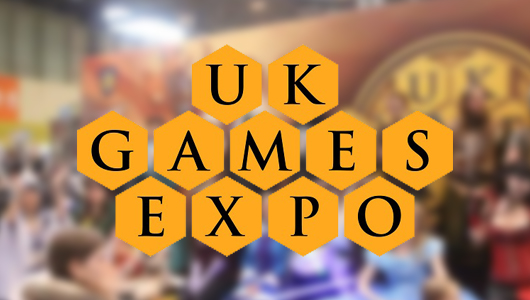 With the second day of UK Games Expo upon us, Alex is joined by Tim for more board gaming goodness.

If you missed our games round up of Day 1, you can find it here. 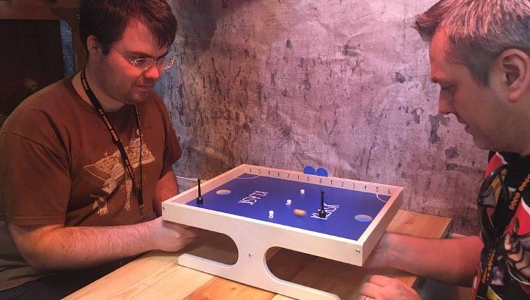 The first stop of the day was at the Big Potato Games stall, which is without a doubt, one of the most beautiful stalls in the expo. We started by playing Klask, a game that I would define as a magnetic foosball. The game’s board is shaped like a small tabletop football field, with a round hole at each end and three magnetic pieces as obstacles in the middle of the field. Players push the small ball around the field using a black magnetic gaming piece controlled from the underneath of the table and attempt to score by getting the ball in the hole on the opponent’s side of the field. The game ends, when one of the players get six points. However, while the points can be earned through the traditional scoring route, some actions also result in a penalty for which the opposing player is rewarded the point. For example, if your black gaming piece ends up in the hole, the opponent gets the point. If two or more magnetic obstacles attach themselves to the black piece, the opponent gets a point. If the player loses control of their gaming piece, the opponent gets a point.

Klask is a beautiful package throughout. The gaming pieces are slick and there is almost a childlike amusement that comes from controlling a gaming piece through the force of magnetism. It is an easy to learn and play, two player game, and it would cater both to those who just wanted to have silly fun as well as those who wanted to be competitive and use the game board to their advantage. 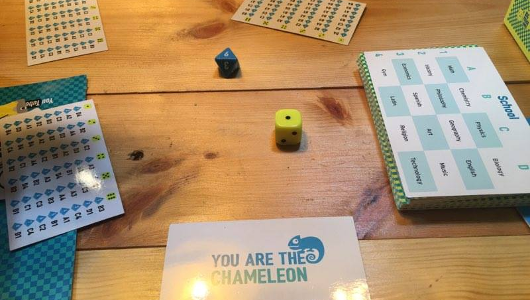 Jumping from one table at the Big Potato Stall to another, we have The Chameleon, a party game where Spyfall and Codenames merged together.

At the beginning of the game, each player is dealt a card. Most of them would have a grid, that would be later used to determine a secret word. However, one person will have a Chameleon card, without the grid. Players choose a topic card and by using dice and the grid on their cards determine the secret word. Except for the Chameleon player who is trying their best to pretend they know what they are doing. Afterwards, all players, including the Chameleon who is faking it until they try to work out the word from other people’s clues, come up with one word that describes their secret word. Following that a discussion a-la The Resistance happens, where all players discuss the words. In an attempt to figure out which one of them is hiding in plain sight. If the Chameleon is found, their last saving grace is to use the real secret word.

Big Potato Games know how to make fun and accessible party games and this one is no exception. While nothing in the game’s mechanics is revolutionary per se, they blend together nicely and this game will have an appeal for a hardcore board gaming crowd and for non-board gamers as well. 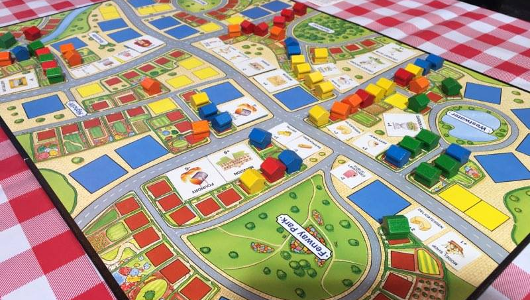 It is always a special day when you get to play a game with its designer. It is an extra special day when that designer is Ian Livingstone and the board game is Boom Town, which had a very limited run, as only 1,000 copies were ever made when it was released in 1990.

Boom Town is an area control game, where players construct a town in 1950s England. Over several rounds (the number depends on the size of the group), players place houses around the area and then place tiles with amenities. These tiles contain values, either positive or negative that denote how prestigious that area is. For example, you might not want kennels in your area, while a cafe would be quite welcomed. Players have an opportunity once around to prevent their opponents from placing a tile that they don’t like.

When there are no more free spaces on the board, the player’s final points are calculated. The number of houses times the overall value of the amenities for that area. The player with the most points wins at Boom Town.

This game is beautifully simple, the decisions are made quickly and with a fresh ease. However, as a child of its time, it feels distinctly like a board game from the 90s. This why Legend Express have taken on a redesign and refresh of the game to make it look and feel like a modern board game. I am very excited to see what they come up with and what changes they will make to the game. Boom Town is a very solid game and it absolutely deserves a return to board gaming shelves. 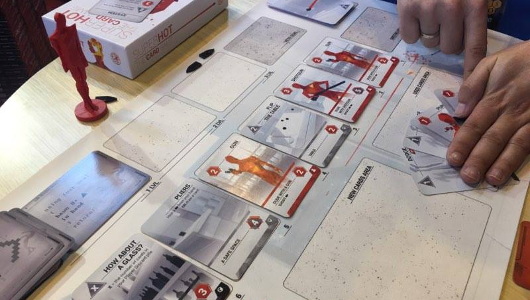 SUPERHOT The Card Game is a micro-deckbuilding game that attempts to replicate the stylish First Person Shooter previously released on Steam, Xbox One and VR. (Was also part of Matt’s list of games that video games should keep an eye out for at UKGE).

The Card Game seems to do a good job of recreating the mechanic of time only advancing when you make a move by only advancing cards in a timeline based on the number of cards that you play in one turn. Strategy comes into play while balancing the threat from enemies versus the amount of resources needed to deal with them. Taking down an enemy will add more powerful cards to your deck but if you don’t deal with an enemy it will introduce a bullet card, weakening the pool of resources you have to draw from. Having too many bullets in the timeline overall will mean you can’t dodge your way out of trouble and will end the game.

While we did not actually play a full game at UK Games Expo we were shown a single player demonstration and talked through the competitive and co-operative two player and three player variants. Co-op sees you and friend combining resources to battle the AI deck, while competitive sees one player take control of the AI deck – with extra powers introduced to make this more enthralling. The three player variant sees one player as the AI and two other players battling against them. Nicely thought out, stylish and quick to play (Also Spoilers: this may be seen at a Tabletop Tuesday near you very soon!). 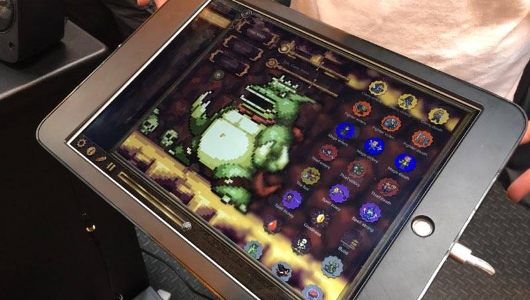 Syrinscape might not be a board game, but RPG geeks will love it. This is an app that provides ambient background sound as a soundtrack to your RPG playthrough. The existing catalogue size is impressive and the amount of options each palette has is equally admirable. If during your campaign you and your friends went into a tavern, had a fight and then suddenly a dragon appeared, Syrinscape could provide all of the noises with different intensities and volumes. More excitingly for me, as someone who had limited experience with RPGs, is that Syrinscape also has a board game player with a soundboard for several well-known board games – for example, Catan and Boss Monster. So if you ever wanted to make a sheep noise every time one is drafted in Catan, well now you can! More sounds will be added as the app’s library is continuously growing, including some user created sounds too.

The app can be purchased on Apple and Android devices as well as on Mac and PC. Quite a large sample of the library is available for free, with additional sounds available for purchase. There is also a subscription service available that unlocks all the sounds in the library.

Syrinscape looks to be a very powerful tool, especially when streaming board games and RPGs. It has already been used by Geek & Sundry team during their RPG adventures. If you are interested in spicing up you GM-ing, then Syrinscape is definitely worth checking out.

This is it for the second day of the Expo, look out for the third and final UK Games Expo Diary entry tomorrow!