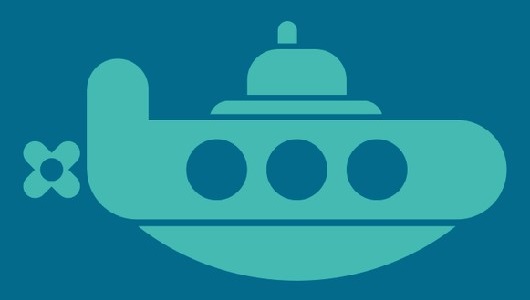 Explore the majesty of an underwater world with your friends…and drown them. Deep Sea Adventure is a simple pocket-sized game that is a masterpiece of demonstrating how simple mechanics can still make for a great game. Players take on the role of maritime treasure hunters – who, for whatever reason is best known to themselves, have decided to use a communal air supply.

Deep Sea Adventure was originally suggested to me by a friend who had picked it up as a “filler” game – something quick and easy in between other bigger titles during an evening’s gaming. It certainly looked the part, coming in a tiny box that could almost fit inside a coat pocket, and with a simple, uncluttered box that depicted a cartoon submarine beneath a minimalist wave. Inside the box are a handful of simple components: a small cardboard submarine, two dice, six markers and a handful of cardboard tokens. It certainly doesn’t look like the most inspiring game I’ve ever seen, but Deep Sea Adventure goes to prove that looks can be deceptive.

Published by Oink Games, a Japanese developer not yet widely known in the UK, the aim of Deep Sea Adventure is for players to leave their submarine and make their way down to the depths to retrieve the treasure. Whoever has the most treasure at the end of the game wins, and deeper-level treasures are worth more points at the end. It’s a simple premise that anybody can understand. The board is constructed out of the treasure tokens themselves, with the shapes varying as players descend to deeper levels which indicate them being worth more points. To move, players roll the dice (which are only numbered 1–3 each) and descend or ascend that many spaces, collecting treasures as they go. Whoever has the most treasure at the end of three rounds wins the game. “It’s almost like an adult version of Snakes ‘N’ Ladders!” I hear you say – but there is much more to Deep Sea Adventure than this. 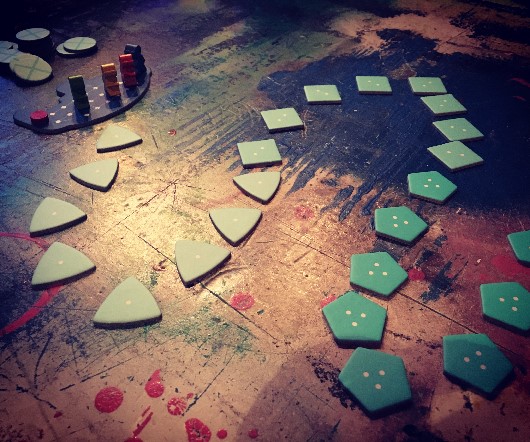 Where Deep Sea Adventure comes into its own is in its risk/reward system. You see, the snag in these treasure-hunters’ plans is that there is only one airway supplying them. The air supply starts at 25 at the beginning of each round and in the initial descent into the sea, that’s where it stays. However, as soon as players begin picking up treasure, it decreases by 1 for every item they carry on their turn. This means that everybody is draining the air supply at the same time, and in a four-player game, it starts to go down very rapidly. Anybody outside the submarine when the air runs out is drowned and their treasure lost for this round. To make matters worse for the would-be underwater Indiana Joneses, every item of treasure they carry weighs them down on the way back up. Carry three items or more and you’re unlikely to be seeing your ship again, but the rewards of the deeper-level treasures could easily see you win the game.

It’s a game that starts like poker, with players making eyes at each other to see who will dare start the ball rolling and wrecking everybody’s air supply, but once someone has taken that step it becomes a mad scramble to grab as much as you can and make your way back to the submarine. There is something immensely satisfying about watching a greedy player make a risky descent, only to get cut off as they near the submarine, but also something truly exhilarating about making it back yourself with a big treasure. Don’t forget to make “glub glub” watery sound effects when your friends don’t make it.

At the end of the round everyone on the submarine banks their treasure safely for the next, while those swimming with the fishes lose theirs, then the round restarts. Collected treasures are not replaced, so the board gets progressively smaller each round and the deeper-level treasures become ever-so-slightly more tempting to reach. Players can even collect the dropped treasures of previously-drowned adventurers to compound their ignominious failure, which make their way to the bottom of the board. After three rounds and several drownings later, the treasures are flipped over to reveal their points value and the player with the most points wins the game.

Deep Sea Adventure goes to prove that simplicity in a game can also be great fun. It’s an easy game for anybody to teach and every round is exciting. Who will start using the air supply first? Do you want to continue down and risk the bigger rewards? Should you grab that last treasure just before you climb back on the submarine? Deep Sea Adventure allows players to exercise judgment in whether to take a risk or not, with just the right amount of luck to keep things fresh and exciting. It plays in around 30 minutes with four players, which I would suggest reduces or increases by about 5mins per additional or fewer players. It is suitable for ages 8 upwards. The game is minimalist in its artwork and scope, which makes its price tag of just under £17 on Amazon quite high for what you actually get. Owing to copies being imported directly from Japan, it isn’t widely sold in many places here in the UK and the price does fluctuate quite a bit. If you can get over the small hump of the price and bag yourself a copy, I doubt you’ll find more fun in a pocket-sized box this year.

Deep Sea Adventure is simple, fast and exciting. The game always challenges players to make a difficult decision – keep going for bigger rewards, or come back and bank what you have. It’s a great gateway game and perfect in between much larger sessions or when you don’t fancy something so heavy.