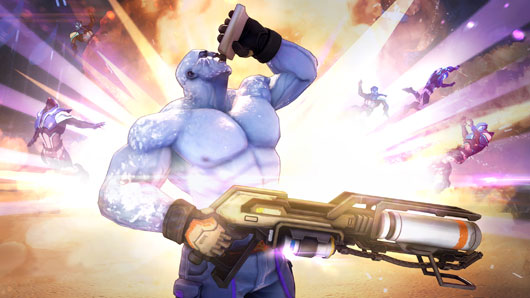 When visiting the most recent MCM London event, I was lucky enough to get a chance to get hands on with the latest creation from Volition, the creators of the Saints Row series. I really liked the first Saints Row game and liked Saints Row 2 but despite hearing good things about Saints Row: The Third and Saints Row IV, I had previously dropped away from the series – partly as my appreciation of open world games has rapidly diminished in recent years. When first announced, I thought that Agents of Mayhem looked nice but seemed like more of the same and as news on this title seemed to have gone quiet, this game dropped off of my radar. Since playing, Agents of Mayhem is firmly back on my game playing agenda.

The announcement trailer introduced us to the notion that Agents of Mayhem would see you taking control of three characters at once – but I had misinterpreted this to mean that you would only have access to the three characters seen in that trailer. Four different characters were available to play in the build I was playing, but twelve characters* will be unlockable in the final game. You can easily switch back and forth between these characters at will, allowing you to chain together their special attacks and using certain attacks to counteract the defences of certain bosses. Each character also has alternate abilities that you can swap to.

The characters I got to use were;

Red Card: A big, red beefcake who had a gun that transformed from a shotgun into a rifle. His special ability damaged enemies in a radius around him at the expense of making him vulnerable and his larger Mayhem ability sees him repeatedly punching himself in the face to psych himself up and releasing increased damage on anyone unlucky enough to get in his way.

Rama: An Indian immunologist and a slower, more deliberate character than the others with a very powerful bow and arrow. Special ability of stealth helped her infiltrate and get to a good vantage point to pick off enemies.

Kingpin:  A hip-hoping, grove master that drops some beats (in the form of a boom box) that forces his foes into a unavoidable dancing groovitron that allows him to easily pick them off with his powered up semi-automatic pistol.

You will notice that there are all four characters listed and that was because I liked the demo so much that I returned to try out the other character and ramp the difficulty up a notch. It did not seem to do too much other than making the minions take more damage but did seem to increase the need to use the right type of specialisation when battling the boss. Meaning you will have to be even more careful when selecting characters, as you have free choice as to who you pick rather than having choices for set slots. Each characters specials are also bolstered by the inclusion of Gemlin Tech – which for some reason had less on-screen prompts than the other specials and so I kept on forgetting to use as much.

(*Now up to 13 characters with the announcement that Johnny Gat, from Saints Row will be a pre-order bonus character.) 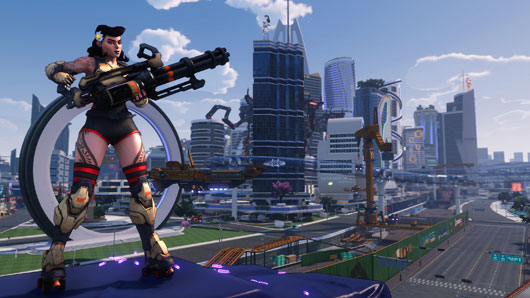 While I was intrigued by finding out that this is actually still set in the same universe as Saints Row, it was the remarkable differences in the way it played that made it stand out to me. While it may bear more similarities to anyone that played through the superhero setting seen in Gat Out of Hell, it does seem as though Agents of Mayhem will be refining that formula to make the marriage of guns and rapid character movement be slightly more grounded, if still a bit fantastical. I also really liked the cell shaded graphical style that popped really nicely on screen.

The one element that really took me by surprise was the rapid vertically of characters. While most gamers will be more than familiar with the concept of a character jumping then double-jumping in mid-air, it is less common to come across a game with a triple-jump mechanic – as in three vertical jumps in a row, rather than a hop, skip and jump olympic event! Add this to a mid-air dash and the ability to quickly combo into another triple-jump after landing on a ledge and you can move up the outside or inside of buildings with the greatest of ease. While not quite “leaping buildings in a single bound” superhero style, it does lead to rapid vertical movement. 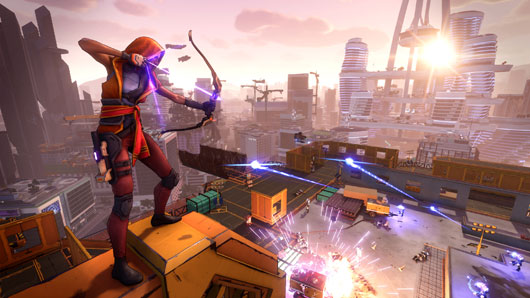 No fall damage does mean that you are able to descend even more quickly and the ability to call in upgradable special agent vehicles also allows for speedy movement when travelling greater distances on the ground – and also gives you another weapon as running over the minions of the evil L.E.G.I.O.N. (or the League of Evil Gentlemen Intent on Obliterating Nations) is a fast way to rack up the kill count. Vehicles have a boost option and the city is littered with jumps to send you flying into the air. While I only got to drive a car it does look like one of the other vehicles is a Akira-style trike that looks pretty badass!

The private organisation your characters are working for is named M.A.Y.H.E.M. (or Multinational AgencY Hunting Evil Masterminds) and seems to be tasked with taking down the supervillains of L.E.G.I.O.N. by any mayhem inducing means necessary. From the way it was explained to me, there is a small group (possibly eight) different villains that you will battle numerous times rather than coming up against characterless mini-bosses.

While I am much more confident than I was, prior to playing, that Agents of Mayhem will be of interest to me, it does remain to be seen just how well it plays out over a number of hours. I will be keen to see how the agents and cars upgrade throughout the course of the game. If I had a worry it is that the characters may end up seeming more one dimensional and less developed than if you had a smaller group for the developers to concentrate on. There is also the worry that the 80’s style humour of presentation (showcased in the above trailer) that appeals to me for now, may wear thin over the course of the whole game – but for now, at least I now care enough to find out.