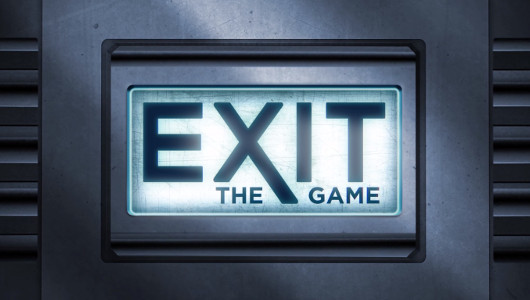 Exit: The Pharaoh’s Tomb is an attempt to replicate the cooperative, timed, puzzle solving experience of an escape room in a table top setting. Most of the active play is sequential puzzle solving, with riddles to guess, cyphers to decode, and crucial details to spot. Once some puzzles are solved, others are revealed, with the goal of escaping the (imagined) trap of the tomb. The thrill in puzzle games comes from the “aha” moments when a difficult-but-fair puzzle yields to some combination of hard work, clever intuition, or a radical change in perspective. The genre succeeds best when the puzzles are tricky but ultimately fair when the solutions require neither trivial grinding nor fantabulous moon logic. The puzzles in The Pharaoh’s Tomb largely pass this test, and if you’re looking for an entertaining puzzle game to play one evening with a few friends, this will probably suit you just fine.

The Pharaoh’s Tomb is a timed, one-shot experience rather than a re-playable game. The game includes a clever built-in hint system, with progressively more direct clues available for each specific puzzle, as and when you want them. The final scoring rubric combines the number of hints you have used with your overall time. We played with 6 players, the maximum suggested on the box. Our team had varied puzzle solving experience: one player had completed around 15 escape rooms, most of us had played a handful, and one was entirely new to the genre. The game took us 1 hour and 45 minutes, with 15 of those devoted to reading out the rulebook. Our group earned 5 out of a possible 10 stars, at just over 1.5 hours and three informative hints. 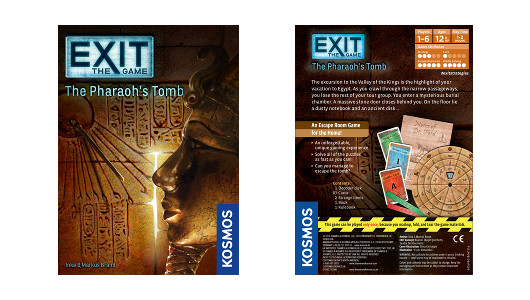 Ours was clearly not the optimal play experience. We played in a reasonably noisy environment with only mediocre lighting, which in retrospect was a mistake. Puzzles were unlocked in a “deep” (few puzzles at a time that follow in sequence) rather than “broad” (many puzzles available at any given time) manner. There is nothing inherently wrong with this structure, but it meant that even 4 players might have found it hard to distribute the available materials equitably. With 6, we had players disengaging because there was simply not enough to do. The whole excitement of the genre comes from the thrill of solving tricky problems. If players are not immersed in the puzzles, the solutions will be meaningless. The game accommodates perhaps four players comfortably, not more. Unfortunately, as a one-shot puzzle game, we couldn’t have known that beforehand; learning it after one playthrough was not useful.

The puzzles themselves are clever enough to keep the game interesting, if not brilliant enough to leave a lasting impression. The game warns you from the outset that you will mark up, fold and tear the game materials. This adds a splash of chaotic flavour from the now popular “legacy” mechanic, though without the possibility of this vandalism affecting future games. Elements of the game are irreparably damaged by the play experience, so no, you can’t box this up and sell it on once you’re done. The most successful puzzles were the ones that required a shift of perspective on the puzzle’s boundaries, making use of the “escape room in a box” mechanics in clever ways. Nevertheless, most of the puzzles are typical of the genre, solving riddles, deciphering codes, and making connections between disparate elements. Anyone looking for a mind-blowing puzzle challenge will probably be underwhelmed, as this is pitched more towards newer players. 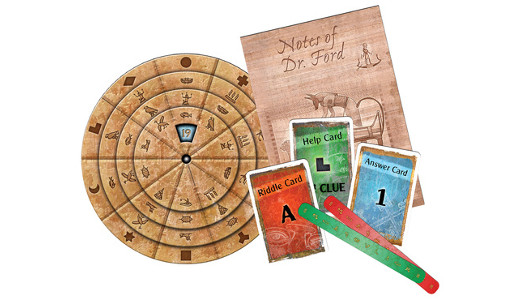 The theme, an ancient Egyptian tomb explorer skin, is only moderately well sustained. The game doesn’t take itself terribly seriously, with the cliché “trapped in the mummy’s tomb” setting heavily lampshaded. To give a sense of the level of subtlety here, you are working from the notes of “Dr. H. Ford.” The chronology is an ancient Egypt mishmash: there are references to Imhotep (2600 BC), Tutankhamun and Nefertiti (about 1300 BC), and Cleopatra (1st century BC) — This is sort of like setting your escape room in Europe and having your players read Platonic dialogues through Galileo’s telescope to escape from Colditz, only less plausible. — Lampshading aside, the tropes are all played breezily straight. The presentation as a silly puzzle game is played up, partly excusing the generic setting, but also limiting the immersion.

One of the downsides of a one-shot escape-room-in-a-box is that there is only the one play experience. Any mistake in design can translate to the play experience, and can’t be fixed on subsequent playthroughs. To run smoothly, The Pharaoh’s Tomb provides both a system for checking the correctness of your answers and a progressive hint system as described above. In general, this works quite well, and is one of the more successful elements of the game’s design, especially in replicating the experience of a live escape room. In one instance, however, there was visual ambiguity in the checking process. This led us to waste 10 minutes fishing for a solution to a problem we had already solved but checked incorrectly. If it wasn’t for a particularly thorough player going back over the images, we might have lost even more time. Even the hint system here wouldn’t have helped, except through telling us that we had indeed correctly solved the puzzle. More testing might have picked this particular issue up.

Successfully replicates much of the escape room experience
Solid hint system overcomes the tricky problem of players getting stuck
Vandalism is fun!
Suggested number of players is clearly too high – 4 at most, not 6
Ancient Egypt theme is silly without being clever
Solution checking frustrating in at least one place

Overall, is this worth buying? I think the answer is yes, if your group likes puzzles and escape rooms. It’s cheaper than any escape room experience. The puzzles are interesting enough, and the hint system is strong. There are moments that make you feel frustrated, and moments that make you feel clever, with a good balance between the two. Is it great? Not quite. The theme is disappointingly cliché, which limits the immersion. The puzzles are solid, but not brilliant, though a few hint at greater potential. And, as we learned too late, the game is clearly not suitable for six people, regardless of what it says on the box. Play it with four people, and in a room with little noise and good lighting, and you’ll have a better time with it than we did; the potential for a fun evening is contained within the box. Our own experience was probably a 2/5, but it is that slightly better, imagined evening, where the game runs to its potential that justifies the 3/5 score I’ve given here.