Get Out is the fantastic first film from director Jordan Peele. It’s tense, emotionally fraught and takes an uncomfortably close look at the way race and prejudice still haunts modern society.

Keeping things as spoiler free as possible, Get Out follows the story of Chris (Daniel Kaluuya), a young man going with his girlfriend Rose (Allison Williams) to visit her well to do parents at their estate in the Connecticut countryside. Chris is anxious about this for all the reasons that you would expect, with the extra wrinkle that he’s black and Rose hasn’t told her parents. Rose is sure that it won’t matter, despite his protestations although once they get there the couple begin to discover that Chris’s suspicions about how comfortable her parents are around him may have been correct.

On it’s own this is an effective enough premise for a horror film, an inherently uncomfortable situation and one that is familiar to most of  us: meeting a partner’s family for the first time. But the way in which the subject of race and racism are woven into the story make an already effective idea and supercharge the tension. That’s an idea running through Get Out, a familiar idea taken to unfamiliar places. From the moment that Chris, a lifelong resident of New York city, arrives in the sleepy wooded isolation of the Armitage’s home, it’s clear something is just slightly off. But as Dean (Bradley Whitford) and Missy (Catherine Keener) go overboard in trying to convince Chris that he has nothing to worry about with them, the he, and the audience feels disquieted and unnerved. That’s as much as I can really share without spoiling the ending but rest assure that whatever you think is happening, by the end Get Out will surprise you. 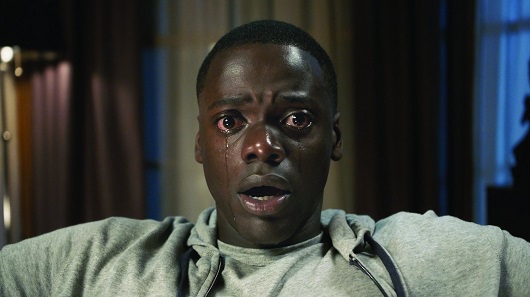 Whatever you think is happening here, you’re probably only half right

Get Out shows that racism and prejudice isn’t just about outright bigotry and hostility but  the blissful ignorance of people in privilege. But it’s never heavy handed or overwrought but instead the deftness with which the subject is touched on over the course of the film serves to disarm and insinuate itself on the audience.The scenes where Chris is forced to play nice with the cavalcade of well meaning but essentially ignorant friends of the Armitage’s are excruciating both because of how well paced and acted they are and also because scenes exactly like that will be painfully familiar to anyone who’s had to endure that kind of very awkward misunderstanding. And for those of you who’ve never been in a strange place with people you don’t know making assumptions about you based on the one superficial thing they think they know about you, then this film will likely open your eyes to what the rest of us have to put up with.

The cast of the film is universally fantastic. Daniel Kaluuya as Chris does a fantastic job at showing the vulnerability behind hi character’s collected appearance. He makes it easy empathise with him as he’s put into an impossible position and acts, almost uniquely for a horror film protagonist, in exactly the ways that you might hope for someone in his unenviable position. Chris’s best friend Rod, played by LilRel Howery, is the comic relief, left behind in New York and becoming increasingly concerned for his friend’s well being as the film progresses. His performance is a little jarring at times, at odds with the tone of the film and his dialogue occasionally sounds like it belongs to a character from Peele’s eponymous sketch show but it’s also not hard to imagine a world where that kind of person exists. 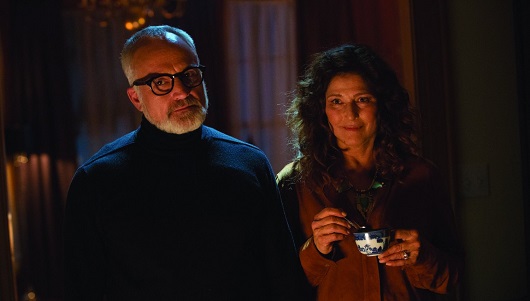 Meeting the parents, what could go wrong?

The Armitage’s themselves are also impossibly well cast. Allison Williams’ Rose is a sympathetic young woman trying to reconcile her love for her family with  the realisation that maybe her family aren’t as happy with her choice of partner as she’d like. Dean and Missy are a lovely couple, well travelled, highly educated and exceedingly welcoming. Whitford embodies the notion of a fatherly patriarch to a T, and despite his awkward attempts to make Chris feel more comfortable (which include mentioning how he wishes he could have voted for Obama a third time) he comes across as lovely and almost cuddly. Keener’s portrayal of Missy is a little less obviously friendly, but again there’s no hostility and outright dislike for her daughter’s new partner. Caleb Landry Jones plays Rose’s brother Jeremy as a lanky scarecrow filled with pent up frustration and as an actor seems determined to earn the coveted ‘Willem DaFoe award for creepiest human being’. Altogether, the Armitage family are a perfectly normal family, apart from all the ways in which they aren’t.

The film was written and directed by Jordan Peele, and although this is his first feature film you’d be forgiven for thinking that he had already made a name for himself as a director. From the music choices and sound design to the casting and camera angles, absolutely nothing is wasted. Get out lasts 144 minutes but it passes by a blinding pace. Even at the times when the film slows down and lets the audience languish in uncertainty, you’ll more than likely find yourself on the edge of your seat with grim anticipation.

Incredibly tense horror film
Perfect cast
Deals with difficult topics effortlessly
It might give you nightmares!

Get Out is essential viewing if you like horror, or well told stories of any kind. Tying a fantastic premise and a pitch perfect cast to a uncompromising look at issues that most films and filmmakers would prefer to skirt around. Get out is a film about something, and that’s worth seeing for that reason alone. You should Get Out to see it, as soon as you can.

The author paid to see Get Out
Official Movie Site