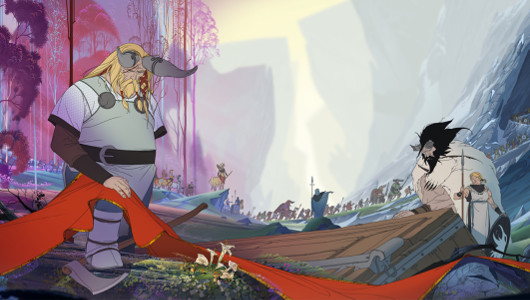 To tell you too much about either game from The Banner Saga franchise would ruin the surprise but at it’s barest components its a fantastic tactical RPG trading in storytelling, defeat and despair. Now the complete Saga has been released on consoles so you too can try and fail to eke out a miserable existence in a dying world. But in a fun way.

Inspired by Norse mythology, The Banner Saga casts you as one of several leaders facing the end of their worlds. The gods have died, the sun has stopped moving and the Dredge, an inhuman army once thought banished from the lands of men, have returned with a vengeance. There’s not really a question of stopping the apocalypse, it’s already been and gone and in any case there’s nothing your motley collection of farmers and bandits could have done to prevent it. Instead it’s about trying to save the few people you care about from starvation, despair and themselves.

There are two distinct sections to The Banner Saga, the choice  based caravan sections and the turn based tactical combat. The caravan charts the passage of your people across frigid lands away from the Dredge or to get back to a lost home or both. A small display at the top of the screen gives you vital information like number of followers, how much food you have remaining and what the moral in your group is like. At a basic level you have to juggle these attributes to keep things as tolerable as possible. Each day that passes in the perma-light tundra you use up food. Eat it all and people will start to starve. Your people fare better when morale is higher but to keep it high you need to rest, which uses up food and so on. It’s a grim kind of homoeostasis, that will see you struggle rather than thrive. It is a particular kind of rewarding akin to balancing on a tightrope. 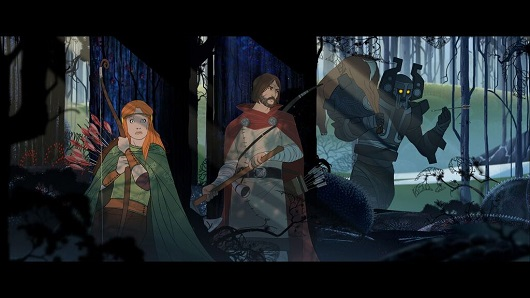 If you go down to the woods today, things will probably go very very wrong

As the days pass and your band of stragglers journey across the land you’ll be faced with choices at random intervals. For example, you’ll come across a load of slightly suspicious looking fruit. Your people want to eat it, but you can also order them not to. Maybe the fruit is poisonous  and you’re saving those under your command from a painful death. But maybe it’s perfectly edible fruit and by leaving it behind you’re sacrificing perfectly good rations for the long road ahead. That’s a less serious example, but there are plenty of choices where there is no good outcome. There are no real heroes here, just desperate soldiers trying to make choices that get as few people as possible killed.

When the combat does become inevitable, you’re first given a few moments to decide how to engage. You get information about how many soldiers both you and the enemy have and then can choose whether to charge in, take a defensive position etc. the game does give vague hints about what it thinks you should be doing in these sections and it seems that different choices set up the turn based combat sections differently. Unfortunately it feels quite obtuse and although that may have been the intention it comes across as overly ‘gamey’ in a way the rest of the game manages to avoid.

Although most of those people exist in the abstract, just numbers on a spreadsheet sent out to die for you, there are exceptions. There are a whole host of characters that from your party, both as part of your caravan and in the combat. At various points in the story these characters can have interactions that help you learn about them and the world. These are very well done, just through text rather than voice acting and the game’s absolutely beautiful hand drawn aesthetic. The character design here is absolutely second to none, you can know almost everything about a character within their first appearance, just in their voice lines and the way they look. Their appearance ties into the game’s mechanics too, you’ll know exactly which character is which from a cursory glance. 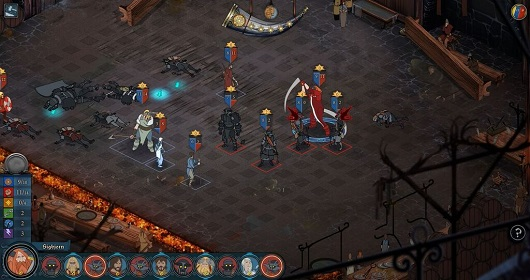 There’s a lot to manage in this screenshot, and it only gets more complex from here

Combat is quite challenging even on normal difficulty. No doubt veterans of the genre will have more luck than I did but I ended up putting the difficulty down to easy and had a better time for it. Difficulty doesn’t make the decisions you make in the story portions work out any better of course but you can’t have everything.

Banner Saga was designed for PC and tablet platforms, like a lot of tactics games. However this new compilation is on consoles too. Point and click interfaces are difficult to translate to a pad rather than mouse or fingers but Stoic games have done a good job making them work on a controller. They can be fiddly at points, precise positioning of characters and  occasionally get confusing but for the most part I felt mistakes were mine. There’s a lot of information available to you, but a few button presses makes it easy yo customise your display on the fly. Using the d-pad to shift between different settings. It’s a small touch but a nice little addition that makes managing all of the data you’re given far more doable.

The Banner saga (1 and 2) are difficult, complex and just a little exhausting. A few hours battling against life and death stakes against elements and enemies will see you a close to despair as the characters you’ve been leading. But that’s exactly what makes the game so compelling