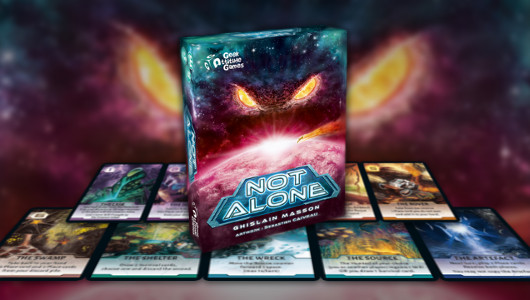 Editors Note: Please join us in welcoming Matt – a new guest writer who will adding to our written tabletop content from now on. You can also see more of his work over on his blog Creaking Shelves. A Big Red warm welcome to you Matt! = )

Not Alone was a surprise hit during the most recent Essen Spiel – the biggest board gaming trade show in the world, and it is easy to see why. Its art is indisputably gorgeous and will have you studying the pictures rather than thinking about the game. That game oozes theme from every shadowy orifice and what a wonderfully simple, yet totally compelling theme it is. Just the thought of being hunted is enough to get the small mammal part of the brain to kick in and then there is the why. 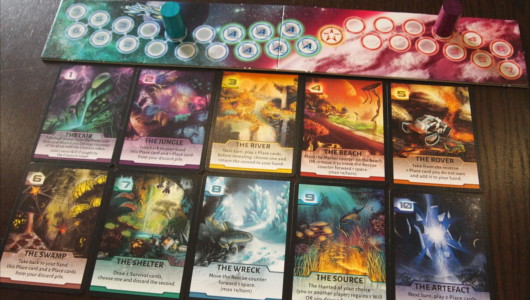 It would have been so easy, so obvious, for this to simply be something looking for a delicious snack. But Not Alone‘s creature, controlled as it is by one of your fellow human friends, has an intelligence and relentlessness that wouldn’t have made sense. Plus, player elimination would suck. So much better than that the apparent aim for the creature is to ensure you never leave. Again, not by killing you but by wearing down your will until you are just absorbed into the planet. Ultimately, the creature is less of a monster and more like that neighbour who always wants to engage you in a conversation for 20 minutes, to the point where you start sneaking out your back gate to try and avoid them. Not Alone isn’t a sci-fi horror, it’s a metaphor for British suburban life!

Kicking off with a panorama of 10 locations that make up the planet of Artemia, spread out in a grid in the centre of the table. Survivors each choose a location to visit in secret, which works much like choosing a place to visit in real life. You place the card matching that location face down on the table in front of you. Then the monster player takes its monster poker chip she has been fiddling with up until now and holds it threateningly over the “planet” while the “hunted” squirm in their chairs. She is sniffing them out (not literally), attempting to figure out where they’ve gone. Often, she will just have to rely on intuition, but each players’ discard pile is open: the monster will know where you have gone. That means they will know where you could go, and especially where you want to go. 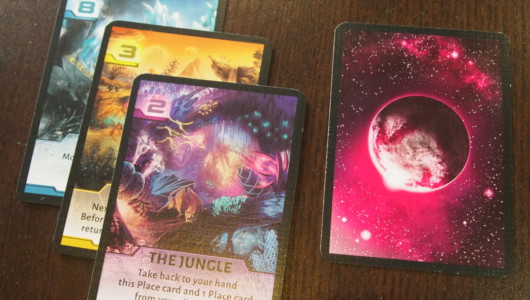 Not Alone‘s genius is that there are locations that are just better places to go, places you will need to go if you ever want to get off this rock. The hunted score a point every round for free (people will come looking eventually) but it is a long way to victory. The only way to advance your score marker faster is to make it back to the wreck of your ship to send out a distress signal, or to visit the beach twice, where you are presumably building some kind of signal fire, or waving your arms furiously at some passing spaceship. Hmmm… well, moving on.

At the start of the game you only have access to the top five locations, so a hugely important spot is the rover, letting you add one of the bottom row locations to your hand. But the creature knows this and you know the creature knows this. So the stage is set for the most intense half hour of double guessing you will get. There is no social deduction here, only the tension, round after round of whether you will be caught or not. So surely the creature should just sit in the rover, playing some toons on the stereo, and giving all the astronauts stood outside wanting to use it the finger, right?

Well, that might be great if it was not for the Lair. Now, obviously, going to the monster’s lair isn’t for the feint of heart but get away with it and you will be able to do the action of wherever the creature is. But if said creature decided to take a pyjama day at home this round the punishment for being caught is even more severe (if there is one thing I have learnt it is not to disrupt someone’s pyjama day). What is the punishment for being caught? Well, firstly the creature moves their score track one space closer to victory. You will notice the creature’s track is quite a bit shorter than the hunted’s! 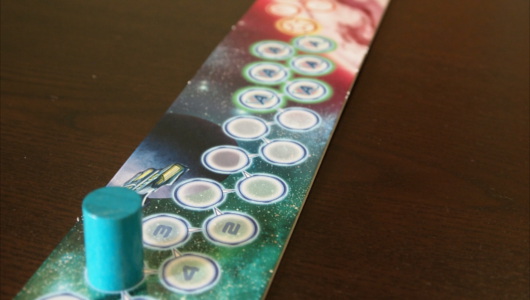 You will also lose one of your three little will cubes. At the lair, you lose two. If you ever run out then the creature advances another space, but at least you get to pick up all your cards. Finally, you do not get to use the power of that location – potentially devastating! Other locations are more situational but that just means you are more likely to try hiding there. The river lets you play two locations next round and choose which to visit once you have seen where the creature has gone. Obviously awesome but you are sacrificing time for safety. If you want to take your life in your hands you could go for the mysterious artefact, letting you visit two locations in one turn. But of course making it twice as likely you will be caught.

Two other locations are all about rest and rehabilitation and (as you would expect) they are the jungle and the swamp, everyone’s favourite holiday destinations. You go here to pick up some cards. A massive part of the hunted’s game is trying to control their hand and discard pile, judging when to make a quick dash to these locations to keep their hands full of cards and their options open. When push inevitably comes to shove, you can sacrifice your own will to pick up cards but that only brings you closer to doom. 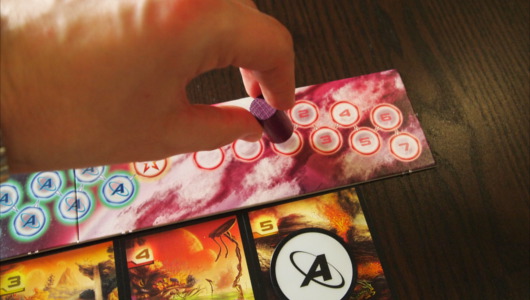 With its variety of locations, Not Alone surprises with what it tells you about you and your friends. You have got the hero always trying to reach the wreck, the cunning player using the lair against the creature, the safe strategist heading to the river, the high-risk glory seeker throwing down the artefact, even the scaredy cat hiding in the swamp or jungle. You will see where your tendencies lie. But you will spend time being all of these characters. When you gamble big and get creature egg all over your face, you will probably play cautiously for a bit. The player who is scared of getting caught will bravely rush to a scoring location and be cheered by the group! Every step forward feels like a tremendous achievement and every player caught is a sombre blow.

Then there are the hunt cards. The creature gets a deck of obnoxious powers that they play each and every turn. Each of these cards is groan-inducing, many give the creature extra tokens to use to target more locations. And you never know what is coming until the card is flipped. Far from unfair, though these cards help drag the balance back to the creature. It makes the hunted’s victories taste all the sweeter and with the hunted scoring at least once every turn, the onus is on the creature to do enough damage in time to win. 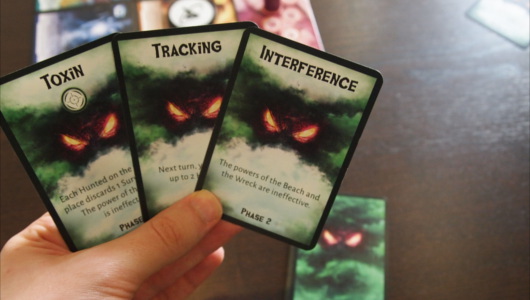 The one issue with these cards is that sometimes it is not very clear when they should be revealed. It states the phase, but rarely before or after the player’s act. It is possible to figure out from context, and when that fails to go for whichever makes it more effective, but the ambiguity is awkward for new players. Speaking of new players, it is also easy to come unstuck with the hand management element of the hunted’s game. It feels a very “gamey” mechanism in an otherwise deliciously thematic game. But these are minor quibbles and ones you will soon get over within a game or two.

Not Alone is a tremendous game. It is a unique experience (and that is not something you get to say too often!) It is small yet satisfying, comfortably covers its massive spread of player counts (2-7!) and most importantly, it is just a tonne of fun! A few fiddly rules do not diminish this otherwise excellent title. Absorb this into your collection now!