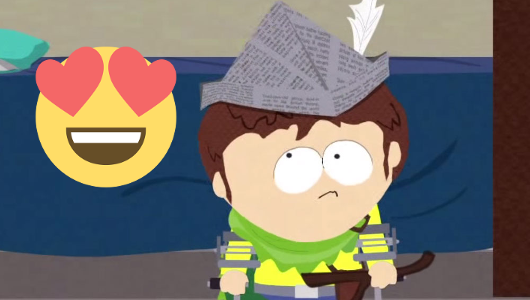 How Jimmy from South Park Became my Favourite Character

About a week ago, I replayed South Park: The Stick of Truth; a game I completed before, about two years ago. I mention this only because I hadn’t started university yet, which changed the way I approach games quite a bit. In general, a lot changed since I last played Stick of Truth, especially how I now view Jimmy; an adversary and companion in the game.

During the first act of the game, you are tasked with getting the Stick of Truth, the game’s McGuffin back from a character called “The Bard”, which it turns out is Jimmy; a series regular on South Park. He is also handicapped and has a stutter. As I have a stutter myself, I’m quite vigilant to when I encounter the latter in games. The Stick of Truth, however, uses Jimmy’s stutter in a meaningful way that I just loved!

When you first meet Jimmy he is an adversary you are tasked with taking down. As you meet him, he does the classic villain-telling-you-his-whole-plan-shtick. Close to the end of his speech he starts to stutter quite heavily trying to say “Magical songs of enchantment”. As a way to overcome this block, he starts the sentence over and over, trying to get enchantment out. This is a method a lot of stutterers use to get through a stutter.

This is where the game puts a prompt to skip the cutscene on the screen. It’s not one of the regular ones in the corner of the screen. It’s right up in your face. While it’s on-screen, Jimmy continues to stutter and trying to finish his sentence. Here’s a Youtube clip of this scene and a similar one that follows a few moments later in the game. When using a gamepad, the prompt actually depicts the button you are supposed to press, the red one on your gamepad.

During my first playthrough, I dismissed this scene and thought it was a way to introduce the ‘skip the cutscene’ mechanic. Playing this scene now, though, I decided to not press the button to see how the game would react. I was ready to get incredibly mad at the game if skipping his stutter was mandatory.

It wasn’t. Jimmy finishes his speech and starts the combat encounter. He does so on his own, without you taking away his agency.

To be honest I understand everyone who pressed this button, because more times than I can count I desperately wanted this button to exist in real life. Many times I’ve been in Jimmy’s place, not able to finish a sentence, trying over and over to do so. In my case, though no big red button appeared, but somewhat of an equivalent. People would often try and finish my sentences for me, in Jimmy’s case that last word is quite apparent. While sometimes this can be a relief, more often than not it just takes away my agency in the conversation. South Park: The Stick of Truth put me in the shoes of a person having to deal with stuttering and for that I am grateful!

Let’s talk about two more situations that made me appreciate Jimmy even more. Later in the game, he becomes a companion and assists you during fights. One of his moves is a song that buffs your party and weakens the enemies. As with all attacks in Stick of Truth, you have to do button prompts that somewhat correspond with what’s happening on screen. For this specific spell, you have to mash a key while Jimmy is stuttering. At this point, I was lost for words. The Stick of Truth takes Jimmy’s disability and makes overcoming it a move that empowers himself and you while weakening enemies. Here’s a clip of it, which is slightly NSFW, so maybe don’t watch it at work.

At another point during the game, there’s a sidequest where Jimmy wants to buy a flute from the farmer. During a cutscene, he stutters again while saying “magical songs of enchantment”. This time though you can’t skip it. This could be for two reasons. The game might just say that the farmer Jimmy is talking to is a nice chap who wants Jimmy to finish this sentence by himself, as he is a nicer person as the player might be. It could also just be an elaborate setup to annoy and troll many many people on the internet.

For the thoughtful inclusion of Jimmy and his disability, I applaud the designers of The Stick of Truth. Thank you for including stuttering in a meaningful way into your video game. ❤️