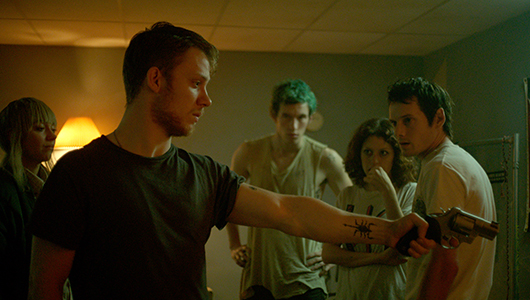 Rocker group ‘The Aint Rights’ are eeking out the last leg of a modest, but oh so authentic punk tour through the Pacific North West, syphoning petrol for their dilapidated van and living on rice and beans provided as payment for gigs in dreary canteens. Down on their luck and faced with the long road home they accept a gig at a backwood club populated by a ‘boots and braces’ crowd, ie. terrifying, right-wing, white supremacist, Neo-Nazis. Aside from opening with a cover of a certain anti-fascist anthem by Dead Kennedys, it looks like the impudent musicians are about to slip away with their meagre earnings and health intact. But then they stumble across a grim murder scene and suddenly, what was at first a chilly atmosphere swiftly becomes a twitchy standoff over who will acknowledge the unspoken threat first and allow things to get really ugly. Of course, before long The Aint Rights are barricaded in the titular green room with nothing but a single hostage and a single gun to somehow secure their freedom, with club owner Darcy (Patrick Stewart) “reassuring’ them from the other side of the door that they’re ‘trapped. That’s not a threat, just a fact.’ 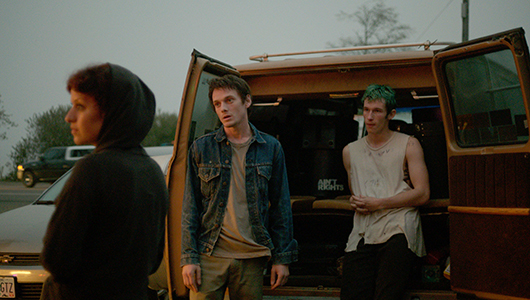 What follows is one of the most tense and taught film experiences of recent years, as the band negotiate a path to the exit, at first with words and eventually, of necessity, with force and violence. And boy is it violent! It’s hard for gore to make an impact these days with the sheer amount of it that’s freely available in the innumerable and unendurable torture-porn features that have become so popular. But Saulnier’s economic deployment of truly gruesome and mean moments of visceral blood and guts is shocking and totally inherent to the plot. Restrained seems like an odd word to use considering the hysteria that surrounds each violent act, but it’s appropriate. With each grisly encounter the drama is heightened, and the stakes are raised (along with BPMs). 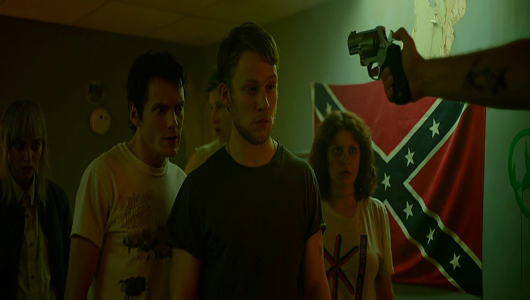 Bolstered up by solid performances all round from the band members and skin heads alike, Stewart as silver-tongued Darcy is a particular treat in such an unexpected role for him, although at times it does feel as though he’s just strolled on set from a RSC production, as his theatrical gravitas is sometimes uncomfortably incongruous. Indeed both he and the film are mean and unforgiving, and there’s no love lost on the protagonists, but it’s not mean-spirited. A comedic riff on Desert Island discs becoming more and more honest as impending doom creeps closer is a perfect example of gallows humour. And that’s not the only surprise Green Room has up its sleeve. While appearing at first to be a standard siege flick, Saulnier managed to feint and double back every time I thought I had him sussed. 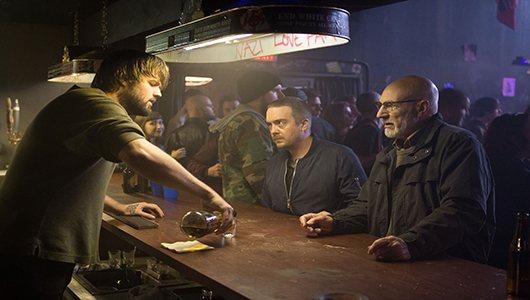 Green Room does hit on a few unexpected genre staples in addition to subverting the siege standards, feeling particularly slasher-y, in no small part thanks to is artfully 80’s visuals. But it’s the interiors that are the star of the show aesthetic ally with claustrophobic corridors prowled by red-laced skinheads wielding box cutters and machetes under migraine inducing flickering, fluorescent lights. Complexity is perhaps lacking, particularly in comparison to Saulnier’s previous Blue Ruin, and for all its challenging physicality, politically speaking Green Room is less nuanced. What a shock, Neo-Nazis are bad people and can be easily led by a clever opportunist. Similarly, complex character motivations are simply replaced with sheer survival instincts, but it could be argued that it’s hard to be cerebral while fighting for your life.

Tense and absolutely terrifying
Fantastic use of shocking violence, without being reduced to shock value
Great performances and visuals all round
Slightly reductive politics

Green Room is an anxiety inducing, tight and claustrophobic siege film with all the trapping of a scruffy 80’s low-fi horror, which manages to be paradoxically dark and brutal, yet restrained and thrifty with its shocks. It perfectly distils that stomach-dropping, out-of-your-depth-and-certainly-comfort-zone feeling in its first act, as it’s all attempts to not really acknowledge the big and deadly elephant in the (green) room. What follows is a frenzied and frantic, tooth and nail struggle to make it out alive. And it absolutely flies by at just over 90 minutes. “We’re not keeping you here, you’re just staying”; there’s nothing more intimidating than what is implied rather than said outright, and for such an unrelentingly brutal and savage film, what deserves just as much praise here is the control.