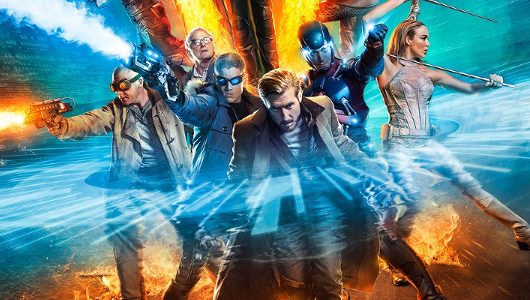 When I first heard about DC’s Legends of Tomorrow, I have to admit I was concerned. It felt, to me at least, like nothing more than an excuse to throw together a team of characters played by actors who were under contract but no longer had a place in The Flash or Arrow due to those shows already being over-saturated with series regulars, the numbers of which appear to be still growing.

On top of that I couldn’t shake the feeling that this was an attempt by DC and the CW to create a Justice League for TV, using whatever B-list fan favourites were available at the time due to the fact they weren’t able to use any of the big hitters because ‘this is only television’ and ‘Hollywood is oh so much more important and obviously has a much better grasp of the source material than any other medium…’

But being a fan of the other shows in this universe, and a huge fan of Captain Cold in The Flash, I gave it the benefit of the doubt and jumped in, and to my surprise, Legends of Tomorrow works quite well.

In the future, Rip Hunter (Arthur Darvill), a rogue Time Master, steals a time-travelling ship called The Waverider and heads back to 2016 to recruit the help of eight skilled / super powered individuals to help him stop Vandal Savage (Casper Crump), an immortal from ancient Egyptian times, from conquering the world, and killing Hunter’s family. 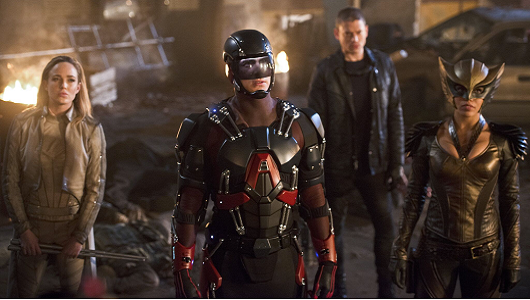 Consisting of Kendra Saunders/Hawkgirl (Ciara Renée), and Carter Hall/Hawkman (Falk Hentschel) whose own tragic fates are linked to Savage’s, Jefferson Jackson (Franz Drameh), and Martin Stein (Victor Garber) who combine to create the fearsome Firestorm, Ray Palmer/Atom (Brandon Routh), and Sara Lance/White Canary (Caity Lotz) both affiliates of Team Arrow and believed dead in the eyes of the public, and Mick Rory/Heat Wave (Dominic Purcell), and Leonard Snart/Captain Cold (Wentworth Miller) two career criminals brought on board for their special ‘skills’, the team travels throughout time searching for clues to Savage’s whereabouts and a means to stop him once and for all.

The time travel aspect leads to some seriously interesting stories and settings and is the perfect excuse to see characters from the broader DC Universe we wouldn’t otherwise be able to see. In particular, this universe’s version of Connor Hawk in a pretty grim Arrow-centric episode, and of course the legendary Jonah Hex makes an appearance in the old west, in what is probably this season’s strongest episode, are the two that immediately spring to mind, but they are far from the only ones.

Rip Hunter is an interesting character himself, and one I have conflicting opinions about. Knowing his past and the circumstances surrounding his mission make him a very sympathetic character, but his reluctance to open up to the team, often choosing to keep information to himself or flat out lie can also make him highly unlikable at times. 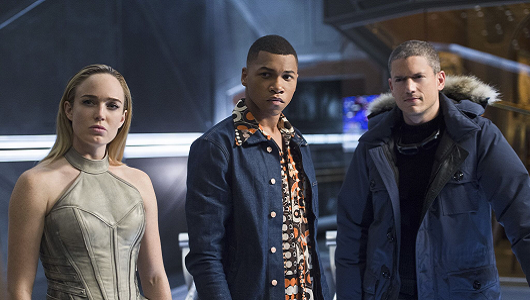 These lies and half-truths create another problem too, as at least once per episode members of the team use them as justification for their insubordination. This whole “well you lied about the thing so I’m going to do this other thing” dynamic becomes tiresome, especially near the end of the season.

It’s great to see Caity Lotz back as Sarah Lance. I’ve never been a fan of Laurel as the Black Canary in Arrow, so seeing Sarah doing what she does best, while also being able to develop away from the shadows cast by the rest of Team Arrow is fantastic.

The standout performances, however, belong Wentworth Miller and Dominic Purcell, who come across as having the time of their lives. They chew the scenery like they haven’t eaten for weeks and ham it up to the point that they’re always entertaining without crossing the line into the point grating. Miller even manages to fit in a cheeky little Prison Break reference that got me laughing out loud. It’s fantastic to see this pair back on the screen again, and I can’t wait to see not only where the characters go past season one, but where the actors themselves go beyond this show. 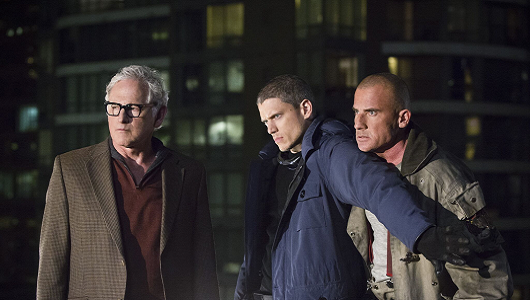 Legends of Tomorrow is at its strongest when the story isn’t focused on the hunt for Savage and instead taking some time out to explore the team’s interpersonal relationships and issues. Learning why each member of the team are the way they are, adds a depth that was missing to them when they were only supporting characters, and in doing so even manages to make the blander members more enjoyable.

Throw time travel into the mix, and you have them dealing with issues such as the morality of interfering with their own timelines. Will changing something in their past make them a better person in the present, or is their fate inevitable? We’ve all asked ourselves if we ‘had the chance to do it again, would we do it differently?’ and to see how individuals with super powers and the means to make these changes act when the opportunity to do so is presented leads to some genuine and surprisingly moving moments.

That being said, there are more than a couple of filler episodes which seem to serve no other purpose than to develop one of the more pointless ‘romance’ subplots, the inclusion of which feels a bit odd considering the season itself is only 16 episodes.

As for Vandal Savage himself, I’m on the fence. At face value, he’s a great villain. Like Miller and Purcell, he plays the role in a way that’s theatrical enough to feel ‘comic book’, without ever crossing the line into the unbelievable; he’s cool, calculating, and exudes a confidence that makes him feel genuinely threatening at times. 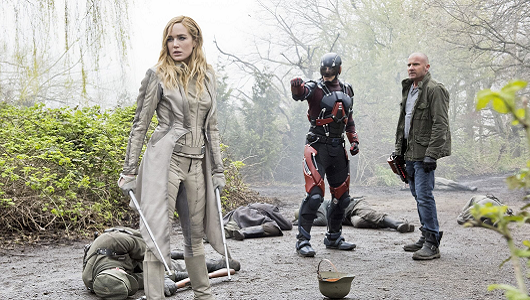 But when you look past the costume, attitude and beard, at the base value he is essentially just a man punishing a woman he is in love with for not loving him back. Granted, he’s been doing it for 4,000 years, and by ‘punish’ I mean ‘killing her and her true love again and again’. He’s the kind of guy who still thinks the term ‘Friend Zone’ is an acceptable phrase to use, and it’s this realisation that, sadly, make him one of the most shallow villains in the CW’s DC Universe.

It’s impossible to talk about this show without mentioning what I think is its biggest influence outside of DC comics, Doctor Who. And that’s because Legends of Tomorrow is DC’s take on that BBC show, and in a brave move that could have gone either way, it doesn’t try and hide it at all. From the casting of Arthur Darvill down to bare bones of the plot (rogue Time ‘Master’ steals time travelling space ship goes on adventures through time), not to mention the numerous Doctor Who references hidden throughout the show, ‘reversing the polarity’ being my favourite nod. The show wears its inspiration on its sleeve with pride, and it genuinely adds to the charm.

The special features included in the blu-ray box set are interesting too. The ComicCon panel is fun to watch, as most CW panels are these days, and the set design and Waverider mini-docs are fascinating. The stand out featurette, however, is Jonah Hex: Hex Marks the Spot, which takes a look behind the scenes of the episode “The Magnificent Eight”, and explores Jonah Hex’s back story, which was missing from the episode itself. Add to that the gag reel and deleted scenes, and you’ve got a pretty strong collection of extras.

Overall I was impressed with Legends of Tomorrow season one. The story was engaging once it got moving, the cast is fantastic and obviously had a lot of fun making the show, and with the exception of one or two set pieces, the special effects looked great for TV. If you’re already a fan of The Flash and Arrow chances are you’re already watching this, but if not, it is worth your time. Besides, we only have a few weeks to until season two airs, so now is the perfect time to join the adventure.