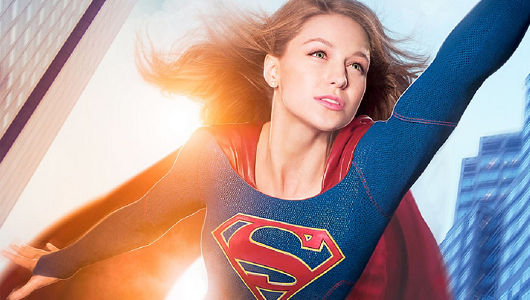 When Supergirl first premiered in October 2015 I sat down to watch the pilot, excited to have another show to add to my ever growing list of superhero dramas, and half way through that episode I switched it off and went about my life, not so much as giving Supergirl another thought until the box set landed on my doorstep a couple of weeks ago.

I’d heard from several  friends that the show was actually ‘quite good’ and I should ‘give it another go’, and with the recent Blu Ray release now seemed like the perfect time to head back to National City and give Supergirl the benefit of the doubt. And, to my surprise, it really is quite good.

The set up is simple and familiar – during Krypton’s destruction, Kara Zor-El (Melissa Benoist) was sent to earth to protect her baby cousin Kal-El. As Krypton exploded Kara’s capsule was blasted into the Phantom Zone. By the time she managed to escape and crash land on earth 24 years had passed, her cousin Kal had grown up to become Superman, and Kara gets adopted by the Danvers family.

For the next 12 years Kara tries to live like a regular human, hiding her powers until one night when she has to use them to stop a passenger plane (one that her adoptive sister Alex was travelling on) from crashing. From that moment on she decides to use her powers for the good of National City and become Supergirl. 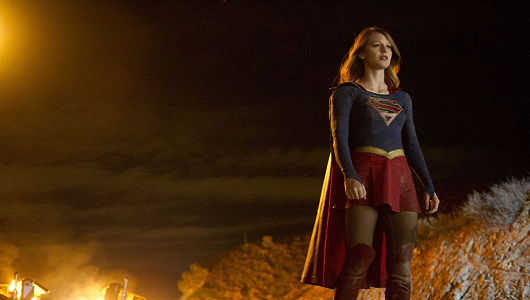 From here, however, things get a little more complicated. You see, when Kara was freed from the Phantom Zone, so too was Fort Rozz – a Kryptonian prison ship housing hundreds of the galaxy’s deadliest criminals. Fort Rozz, too, crash landed on earth, freeing the inmates.

Supergirl is quickly put to work by the Department of Extra-Normal Operations (DEO) alongside her sister Alex (Chyler Leigh), and DEO director Hank Henshaw (David Harewood), who may not be all that he seems, to help bring in the escaped inmates, many of whom hold a grudge toward the Girl of Steel thanks to her mother being the reason they were incarcerated in the first place.

This set up gives the show to have a monster-of-the-week element, by organically weaving the super powered baddies in to the much bigger over arcing story.

When she isn’t apprehending super criminals, Kara Danvers works as the personal assistant to Cat Grant (Calista Flockheart), founder of CatCo Worldwide Media and all round The Devil Wears Prada type boss from hell. Or at least she is at first glance. Cat Grant is easily one of the best developed characters on the show, and the way the relationship between herself and Kara develops is truly beautiful at times. 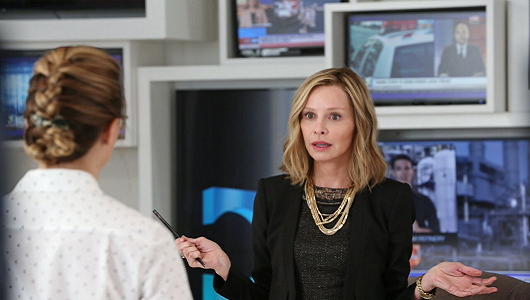 In fact, the relationships between all of the core characters is fantastic. The interpersonal relationships with Kara’s own Scooby Gang is the most natural I’ve seen a team interact since Buffy the Vampire Slayer graced our screens. And once a certain plot point gets revealed at the DEO, the relationship between Kara, Alex, and Hank evolves into something stronger and more paternal than before, the reason for which is truly heartbreaking.

There’s a genuine love for the source material too, although in this instance that source material seems to be Superman. Many of the villains appear to be re-skins of Superman villains. Most notable of which is Max Lord (Peter Facinelli) who is basically Lex Luthor with better hair. The most disappointing thing about this is the fact that if he had just been given the Luthor name, this would have been the best on screen portrayal of Lex we have ever seen.

Indigo, too, makes an appearance filling in for her male equivalent, Brainiac. There’s even a character who, to my knowledge, doesn’t have a female counter part in the comics, and so has literally been entirely gender swapped for the sake of the show to seriously impressive effect, and I genuinely hope she makes an appearance in season two. To say any more would give away the surprise, but her whole story arc is fantastic.

This can make the show seem like it’s struggling with its own identity at times, but never so much that it becomes a problem. There’s something ironic about it too, as Kara struggles to separate herself from Superman in order to be her own thing, so too does the show. 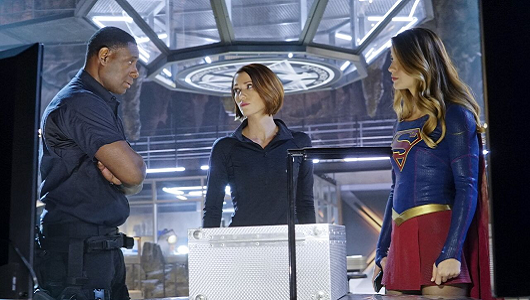 The main problem I had with Supergirl when I attempted to watch first time around was just how cheesy it is at times. From bad dialogue to dodgy CGI effects and character costumes verging on bad cosplay, Supergirl sometimes feels like an episode of Tennant era Doctor Who, which at times can be charming, but mostly it just stands as a reminder that this is a networks first attempt at a super hero TV show.

The fight scenes, too, are clunky and awkward, and really break the illusion that these people are super powered. However, now that Supergirl has a new home on the CW, I am hoping it will benefit from that networks experienced production teams and increased budget, and these issues will be improved by season two.

Like a pizza, the cheese is just one of many things that makes up Supergirl, and underneath the cheese there is a rich sauce and some real heart, but I don’t think you get heart on pizza and I have just gotten lost in my own analogy so I’m going to stop. What I’m trying to say is that beyond the super powered fights world saving antics the core story of Supergirl is about identity, human connection, and trying to find your place in the world. 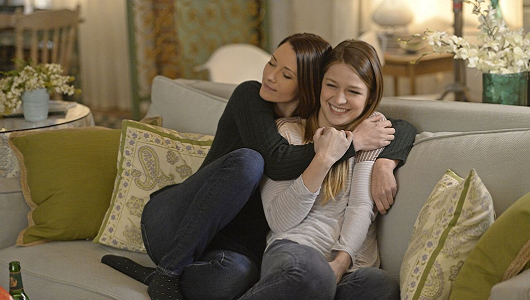 Everyone at one point in their life has felt like an outsider; whether it be moving to a new school or finding where you fit in in a new city or social circle, and Supergirl highlights these issues brilliantly. I am not the target audience (this show is definitely aimed at the young woman demographic), but I was still able to relate to these problems and take something away from them, and it’s this element that gives it the upper hand against shows like Arrow.

I laughed, and on more than one occasion came close to tears. Melissa Benoist is a fantastic actor who really shines during the shows more painful and emotional scenes, it’s hard not to be moved by her performance.

Supergirl is a lot of fun. It’s overflowing with more pop culture references than a Kevin Smith movie, and even manages to have a cheeky little dig at the CW in what can only be the funniest bit of accidental foreshadowing I’ve ever seen. And don’t even get me started on the incredible crossover episode with The Flash.

The Blu Rays come packed with extras too, including a couple of Behind the Scenes mini documentaries, Supergirl’s first ever ComicCon panel, a gag reel, and deleted scenes. They’re fun to watch, and round off an already great package (although if you’re a fan you’ve probably already seen them online).

I began this box set as a sceptic and came out the other side a fan. Supergirl, for me, has breathed new life into an over saturated genre and easily stand up there with the best of them. If you love comic book shows and haven’t watched Supergirl yet, or even if you’re thinking about making it your first show it really is worth your time once you cut through the cheese and get to the sauce and get to the base and I am definitely ordering pizza tonight.