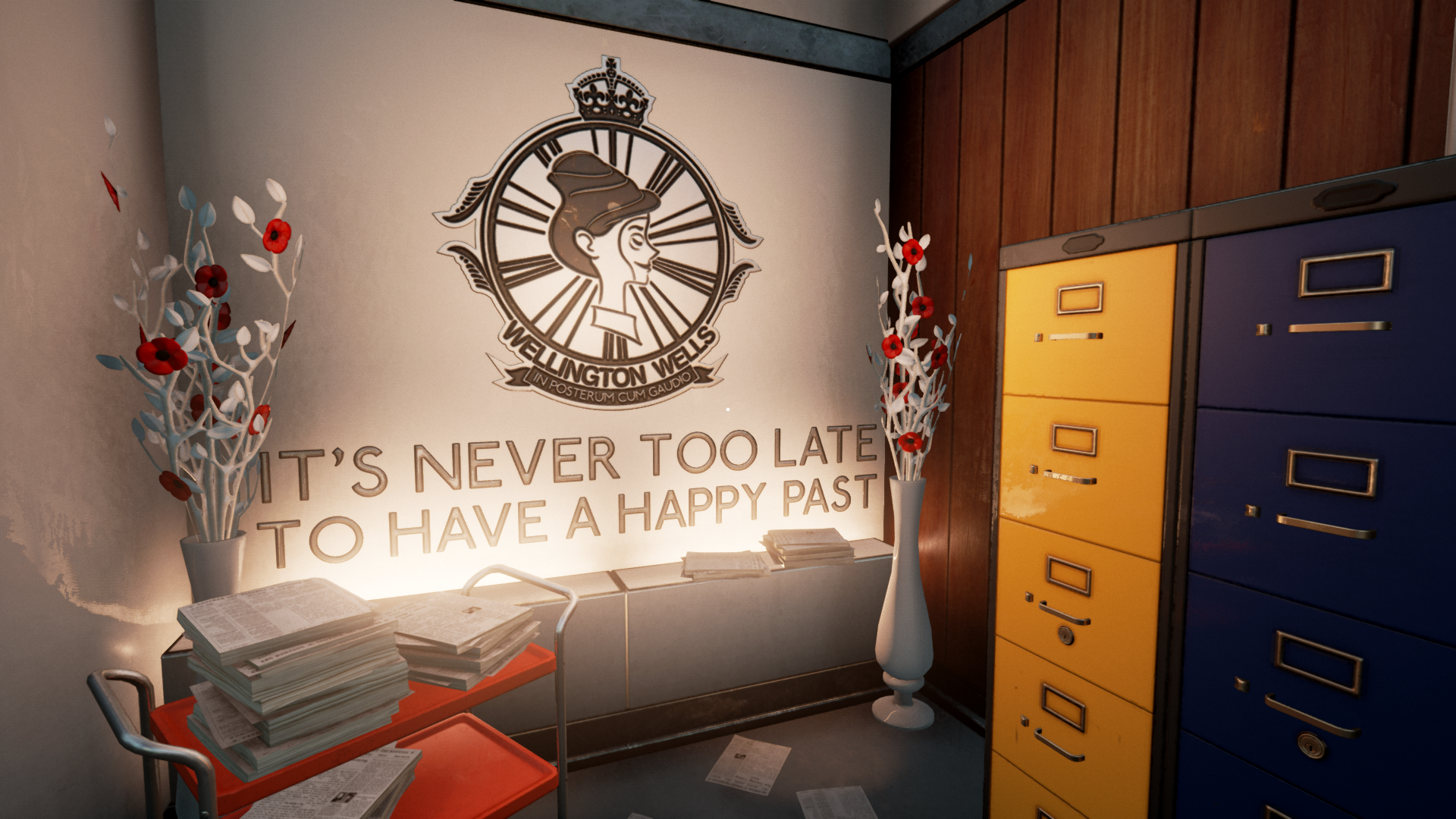 Wellington Wells City Hall doesn’t seem the worst place to work. Stylish office decor, Dalek-shaped waste bins and colleagues who throw each other parties. How sweet. That is until the party piñata transforms into a rat’s carcas before Arthur Hastings sober eyes.

The scripted showcase of We Happy Few at this year’s E3 presented the downright creepiness of this game’s universe, an unsettling dystopia that many couldn’t help but link to Bioshock. However, beyond the concept, similarities are scarce in this preview. We Happy Few may not be the game people expected at this point, but that doesn’t mean it lacks potential on its own.

As we know from E3, the shape of We Happy Few’s alternate-history world can be discerned in the ten-minute introduction. Arthur Hastings’ works as a newspaper censor altering articles from the past to befit a happily drug-addled, rainbow line of accepted thought. 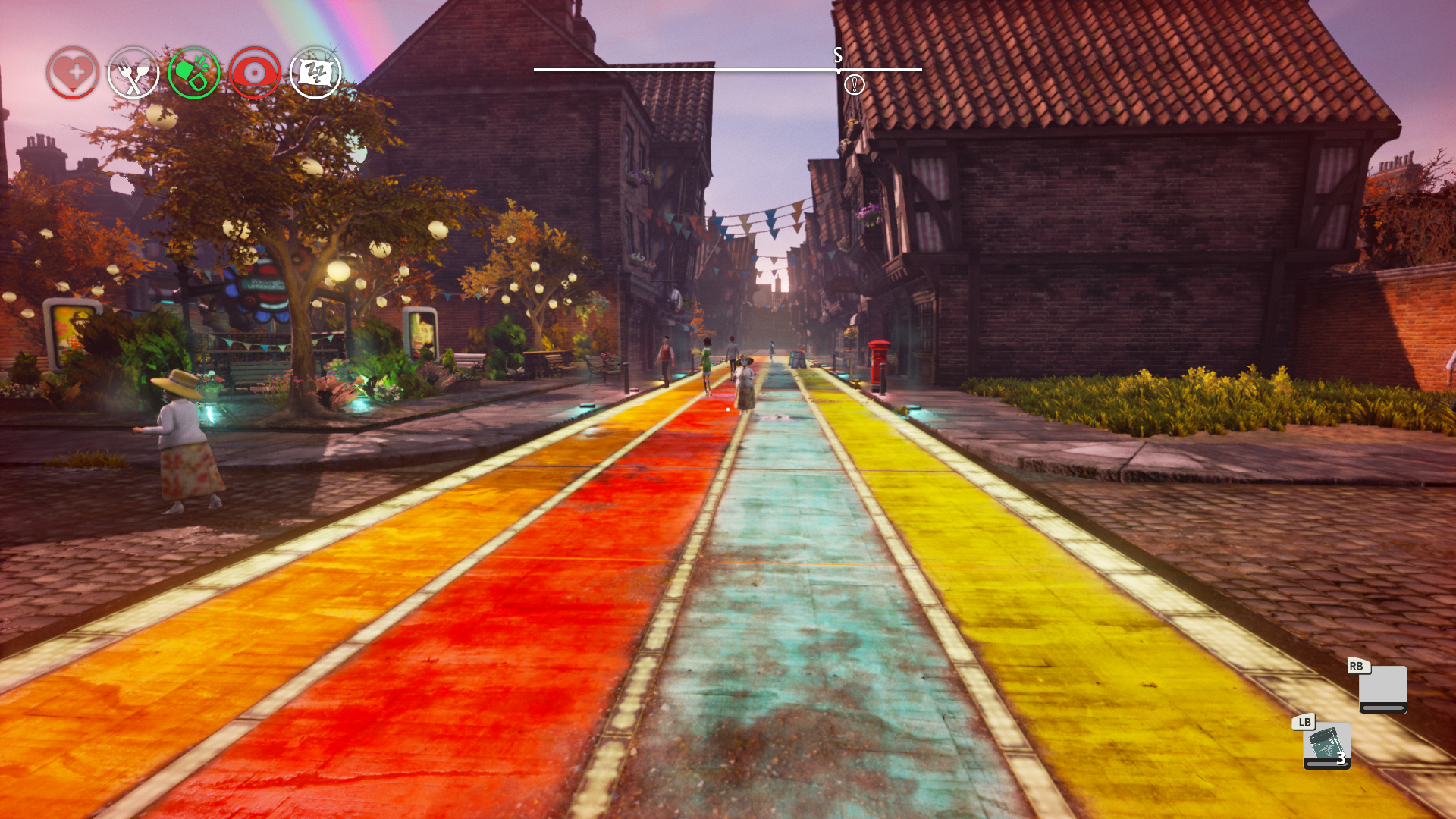 At this point players can technically “finish” the game in two minutes; Arthur is triggered by a news story about his brother, yet can regain deluded contentment by taking some Joy. Obviously, that’s not much of an option, because we want to get out of the Matrix and start hitting people with rocks. The game forums already show repeated player suggestions that choosing the Joy should enable an alternative “Wellie” mode, providing another route at the beginning of the game.

Prior to release, Compulsion Games revealed that other playable characters were not included yet, and neither is an overarching narrative. However, the preview version is certainly not devoid personality. Your perception of reality breaking down would cause anyone to lose their cool, but Arthur does so almost… Charmingly. He apologises after every takedown. He mumbles condolences when looting pockets. He seems like the kind of chap who, under normal circumstances, wouldn’t hesitate to invite you round for tea. He might be an utter British caricature, but he has heart and is voiced superbly by Alex Wyndham.

Although, it’s hard to take much notice of Arthur’s comments when you’re busy getting to grips with his needs. Vitals are a huge gameplay factor and are very sensitive. Hunger and thirst meters deteriorate much faster than is realistic, which is a real nuisance when learning the basics of exploration, NPC interaction and scavenging. The tiredness meter declines at a slower rate, making it easier to forget about when wandering afar to points of interest. Thus, starting the game with the ‘second wind’ setting enabled is probably smart – it gives you a chance to recover from fatal status effects instead of immediately dying. 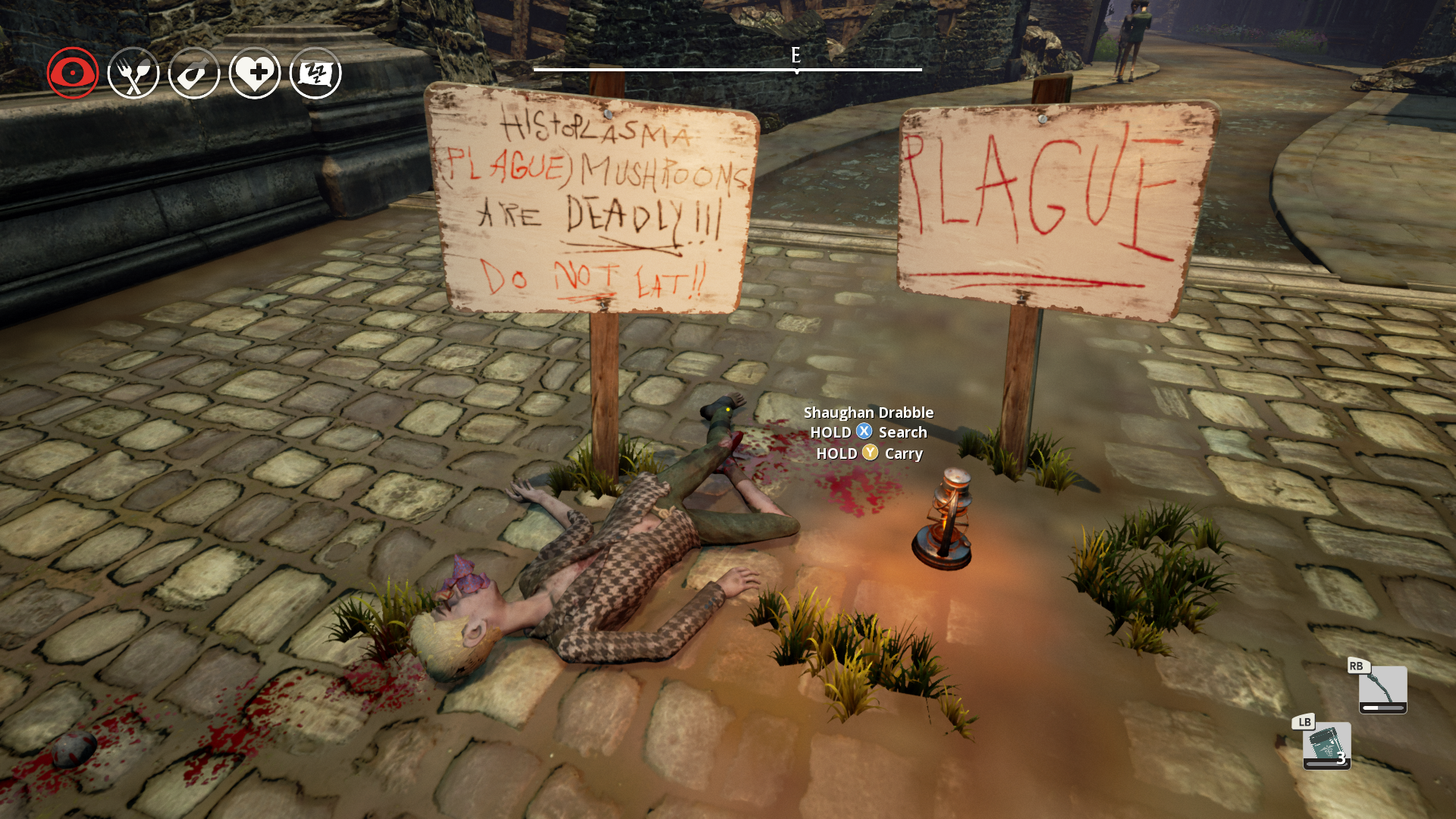 It’s also worth noting that this preview build literally drops you into a world of crazy. Other than loading screen tips, there is no tutorial help in the game. Whether this is a by-product of the lacking narrative remains to be seen, but it certainly raises a lot of questions and few answers as you play. In the ever-desperate hunt for food supplies I took to choking random downers in the street before hiding their bodies in the bushes. However, at least in the starting area, you soon realise that these people… Don’t really care. Sure, they might run over and look at the now unconscious body at my feet, but they won’t bat an eyelid. Similarly, sneaking into houses can be a learning curve. Certain residences can be explored, and are recognisable by their open doorways and purple-red lightning. These locations often provide better containers and a chance to find a mechanical or alchemic table, necessary to craft more advanced medicine and traps. However, a vacant house does not ensure a safe place to catch some z’s; be sure you’re definitely alone before taking a nap because a rude awakening by a crazed NPC doesn’t help your health meter. So, We Happy Few involves a lot of trial-and-error experiences. Thankfully the HUD and menus are incredibly simple, making use of a spatial inventory that forces you to be organised if you want to store important items, like rotten carrots. Hopefully, better categorisation of items will be oncoming, as it’s quite difficult to pick out what you’re searching for; all consumables and useable items, whether it be food or healing balm, is only distinguishable by a light blue highlight, and images aren’t particularly detailed or varied. Thankfully, items can be equipped to quick slots and selected using left and right on the D-pad. Admittedly, it took me about an hour to realise this. Woops.

Thankfully so, as this becomes useful when under attack. We Happy Few’s combat isn’t really much to rave about, utilising a simple melee attack and power-attack system by pressing or holding the right trigger. It’s easiest to swing wildly and mow down enemies quickly, but exertion does increase the speed at which your vitals drop. The plain combat lowers the likelihood of major bugs, although ragdoll effects are extremely visible (and amusing). 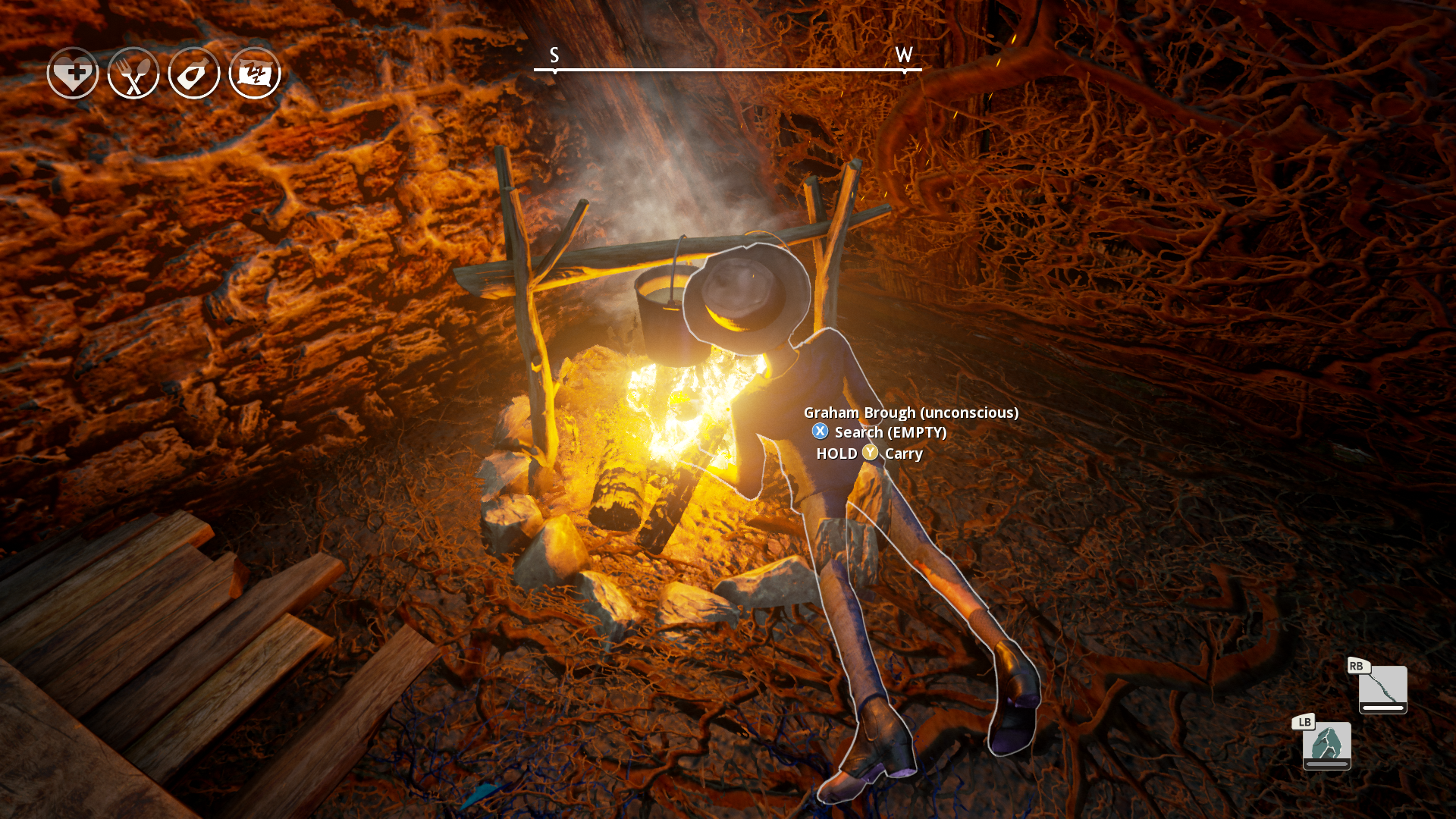 For those expecting a Bioshock-esque title given the hostile feel of Wellington Wells will likely be disappointed by the uninspired combat, although it allows for a quick response when NPC’s attack out of nowhere – which happens a lot. There’s not much sense in the suspicion accumulation; at one point I had to use a loud device to rip through the bonnets of cars found dotted around the map, and the random inconsistency of reactions made the AI seem pretty mediocre. You quickly become attuned to the technique of ‘if they do happen to react, just leg it until the music calms down’. Hopefully, this will be fine-tuned over time, as it does significantly play down the tension. When you do need to whack people with a stick, it’s pretty easy. Most NPC’s aren’t that well equipped and provide a generic standard of an enemy. However, the Bobbies are the exception.

Upon coming across areas highly populated with these white-masked, police-hat-wearing foes, one would presumably want to crouch and act stealthily; however, this quickly seems like the worst option. Being extremely cautious amidst shrubbery and shadows is pretty much pointless because NPCs – bobbies in particular – apparently have superhuman senses. Plus, once you’ve unknowingly given yourself away, you’ll attract countless enemies. It’s unclear whether this will be adjusted, but fortunately, the game already provides alternative methods. In a “wellie” area – that is, a zone populated with folks hopped up on Joy – hiding in plain sight is the only real way to get about. This isn’t immediately apparent; you can take Joy pills to blend in with normality, but these wear off very, very quickly, which is a little disappointing given the game’s narrative emphasis on the power of narcotics. Admittedly, joining in on the constant high would make exploration very easy, so it makes sense that degenerative side effects prevent you from relying on it. 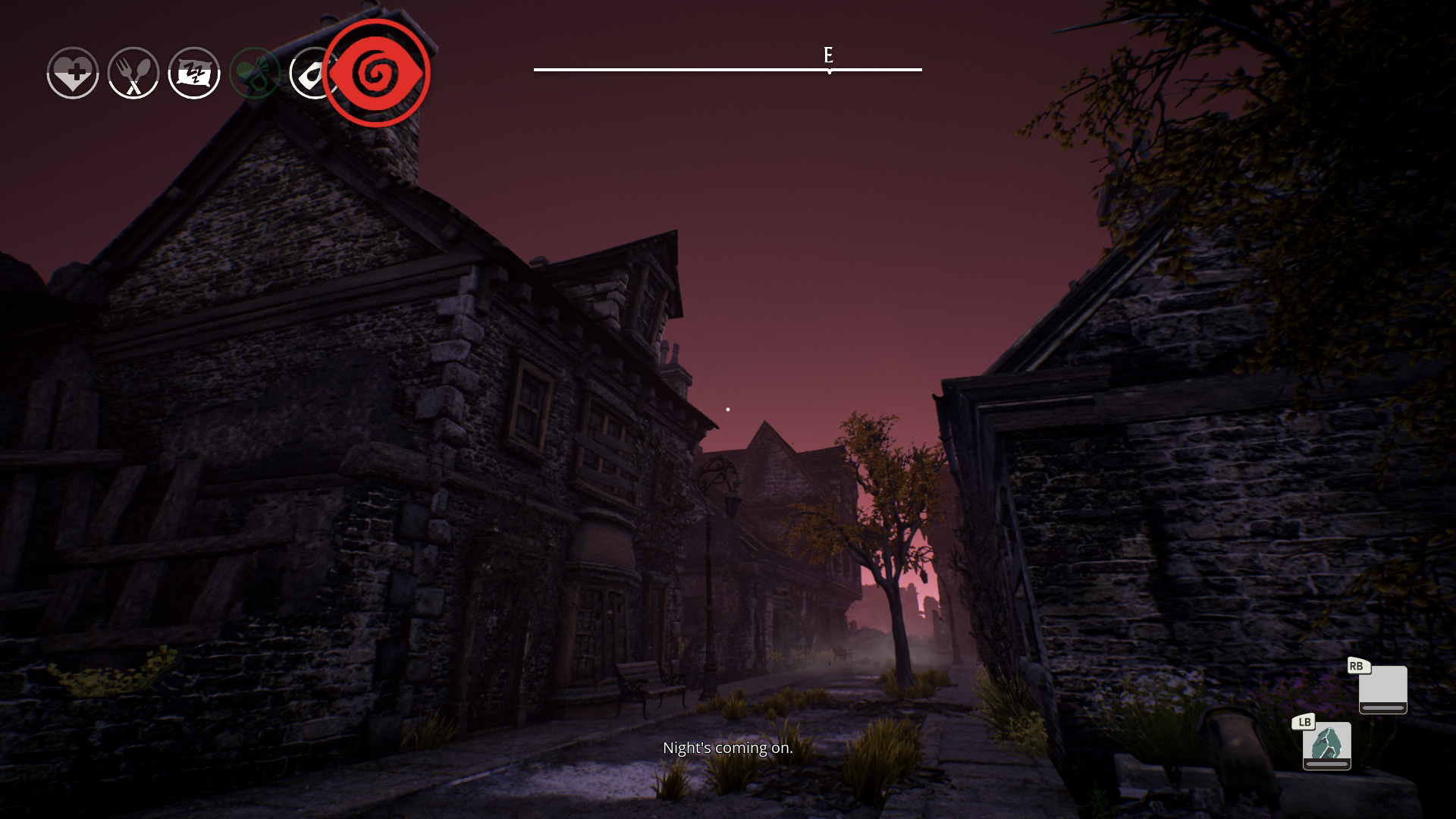 Instead, don a ‘Proper Suit’. Different clothing attracts suspicion of various kinds of NPCs, yet it (again) isn’t immediately apparent how important this element is. Next, step out onto the street. I was both surprised and pleased by this unusual “stealth” method, which involves Arthur walking at a slow pace and, when scrutinised a little too closely by passers-by, engaging in bright small talk. Hopefully in time we will see additions to this interaction; perhaps a choice of greetings or actions befitting the NPC’s suspicion, or other ways to influence your appearance. I fully expected the “sit and read” interaction that appears atop every chair and bench to hide me from mistrustful eyes, and was quite disappointed that it showed no practical element. 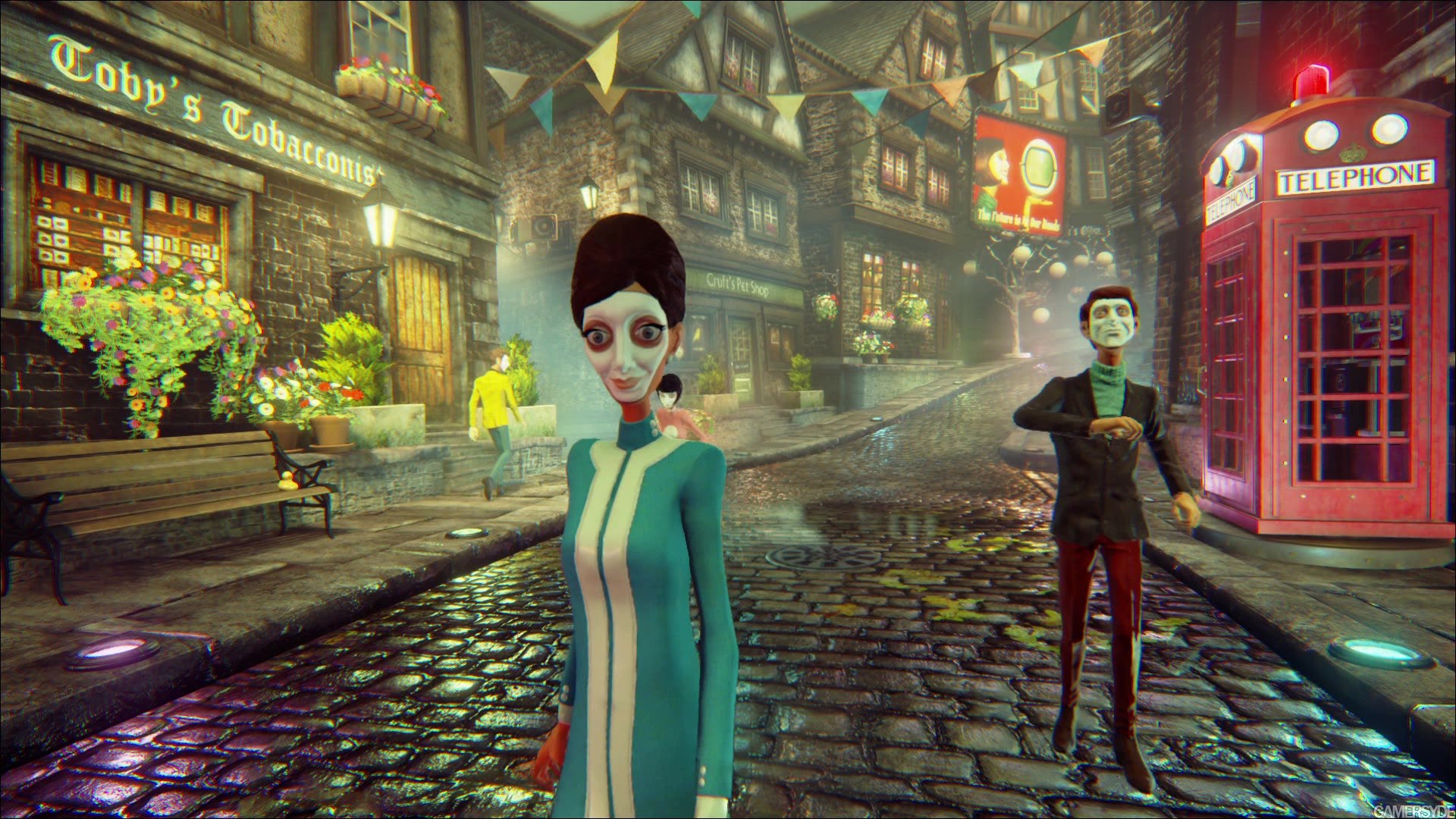 Bugs are naturally expected, and most often occur during side mission dialogue and interaction. Several quests involved talking to a particular NPC, only for the ‘talk’ option to be non-existent or the character to be always busy in an animation. Additionally, main quests that do rely on conversing portray a rather wooden character dialogue with little facial movement or emotion. These are niggling problems that we can hopefully expect to be cleaned up before the game hits the shelves, and the forums are a great place for players to express that need.

Ultimately, areas of dissatisfaction in the first week of We Happy Few’s early access are minor compared to the overall experience. This build lacks significant story elements, yet it provides more than an outline. There are documents and letters waiting to be discovered, which provide insight into characters experiences under occupation, their struggles with both Joy and grief, and reminiscences of the past. While encounters are randomly generated they provide some variation. Some that I came across evoked a variety of sentiments; I helped an infected citizen by clearing a pond of discarded medical supplies, listening to his disdain over the lack of doctors; I dug up some lily pods to take to a Joyless woman, as a small reminder of the child she had lost and was grieving for. 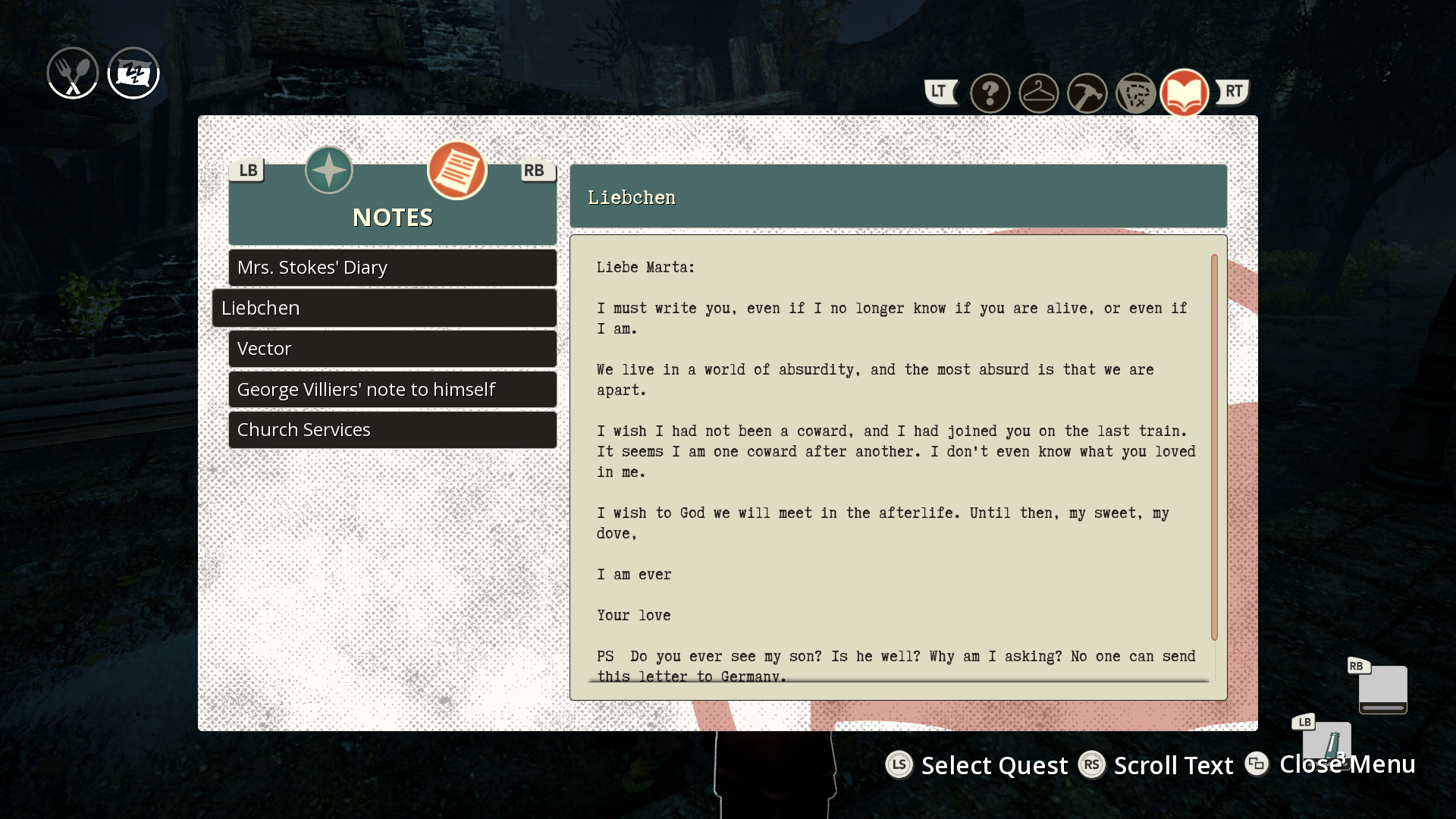 Not everything in We Happy Few is threatening, and it’s clear that not every character is a cog in the dystopian machine even at this early stage of an incomplete game. The survival elements are as addictive as the genre allows, and the crafting system is simple and easy to navigate. But what prevents the We Happy Few preview from becoming dull is the clear potential of these features within an intriguing and promisingly enigmatic universe. For those who were excited by this prospect upon the game’s reveal yet subsequently feel We Happy Few isn’t the game they were expecting – don’t write it off just yet. If you’re thinking of picking up the game early, head to YouTube first. Get a sense of the gameplay and make sure you’re not going in with misconceptions.