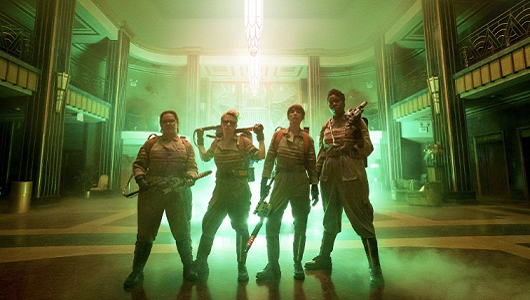 Ghostbusters has been out for a couple of weeks now, and after numerous conversations with friends and inevitable re-writes of this very review, I’m finally confident in what I want to say about this social and political minefield of a movie. Maybe I missed the boat by leaving it so long to say my piece, but I feel that objective opinions on this movie really do need to be shared, so here we go.

First off, I kind of feel bad for everyone involved with Ghostbusters, at least those in front of the camera. Since it was first announced the movie itself and pretty much everyone connected to it has been victim to a campaign of hate from several fronts including, but not limited to; misogynists declaring their childhoods ruined because there is no way women can bust ghosts, an internal power struggle and restructure at Sony Pictures (if the rumours and leaks are to be believed) and worst of all, the power of nostalgia.

With all the (mostly negative) press surrounding the movie, it was difficult not to go into Ghostbusters without any preconceived ideas. The first trailer alone has gone down in history as the most down-voted movie trailer since YouTube’s creation, and with good reason, as the trailer is really no reflection on the final movie at all.

The story is for all intents and purposes a beat for beat retelling of the 1984 original, in much the same way The Force Awakens retreads the steps of A New Hope; Scientist Erin Gilbert’s (Kristen Wiig) paranormal-obsessed past resurfaces to risk ruining her chances of tenure at the college she lectures in, in the form of a book she co-wrote when she was younger appearing on Amazon.com.

Her quest to get the book taken down reunites her with her old partner Abby Yates (Melissa McCarthy) and inevitably leads her right back into the world of the paranormal. Now on a quest to prove the existence of ghosts, Erin and Abby, with the help of kooky tech genius Jillian Holtzman (Kate McKinnon) explore the city of New York trying to catch a ghost for study. 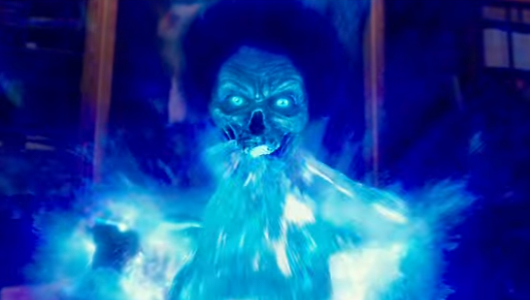 All is not as it seems, however, as someone is amplifying paranormal activity within the city. With the help of Kevin (Chris Hemsworth), the handsome but dimwitted secretary, and Patty Tolan (Leslie Jones), the subway (underground trains, not soggy sandwiches) worker/New York history expert, the team must uncover a plot to flood the city with ghosts and bring about the cataclysm.

Despite the confusing wording of the trailers, this is a complete reboot. The use of the familiar logo and music, as well as cameos from all but one member of the original cast and a couple of spooks, are nothing more but respectful, nostalgia oozing nods to the movies that started the phenomenon that had the world declaring how good busting makes us feel.

Kate McKinnon is an absolute scene stealer. Her character, Holtzman, is essentially Egon Spengler if he was absolutely crazy. She’s the team member who creates the proton weapons and traps, bringing in bigger and crazier inventions as the movie progresses. Every line is delivered with a cheeky smile, and she looks like she is having the time of her life.

The cameos from the original cast members, too, were handled really well. And although I would have liked to have seen them reprise their old roles and pass the torch (an opportunity I feel they missed), I smiled and laughed with every appearance, and felt that they were put there just for me. 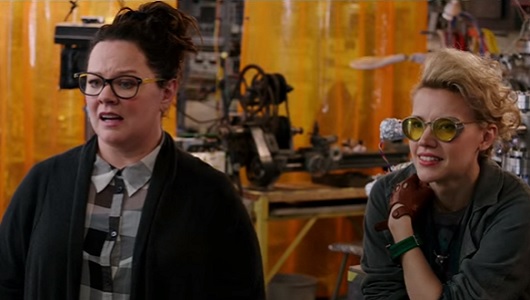 When the jokes land they really land and had me laughing long after the punchline. And despite what the trailer shows it doesn’t rely on gross-out humour. There is a running joke of Erin constantly being slimed that reaches the punchline before it gets boring, and the interactions between the four main cast members are often fantastic.

I found myself enjoying the movie the most during the quieter moments. When the team were just having a conversation and just riffing off each other. It wasn’t until the story picked up again, and we got to spend some time with Rowan, the antagonist of the movie, that I found myself losing interest.
The stand out comedy performance is Chris Hemsworth, who’s understated and sincere delivery of absolute nonsense wasn’t just funny, but genuinely charming. At least until the third act.

And that’s the problem with Ghostbusters. Despite everything good about the movie, there are persistent ‘but’ moments that bookend them. The jokes are funny, but… The characters are well written, but… After awhile it becomes frustrating. The movie could have been great, but it isn’t. 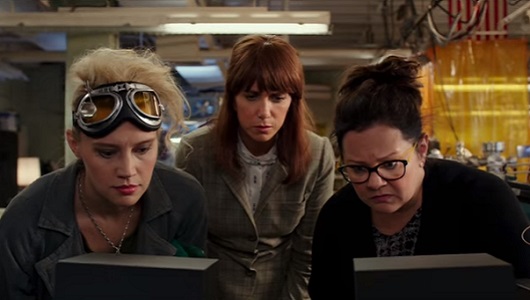 The common consensus online is that Paul Feig hates men, and apart from the fact he’s pretty much said as much in interviews, watching Ghostbusters does nothing to counter that argument at all. Every male character is written as idiotic or a complete A hole, to the point that the joke wears thin.

Chris Hemsworth’s character is a complete moron, and at first I thought this may be a clever commentary on the trope of the hot-blonde-but-ultimately-dumb secretary plaguing our culture since the first ‘blonde’ joke was uttered, but as the movie went on I found myself questioning if Feig was actually that clever.

This is true also for the villain of the piece, who’s main motivation for bringing about the end of the world via ghost invasion is because he was bullied. Neil Casey overplays his role to the point it becomes a parody of itself. By using a human antagonist they had the chance to do something new and sinister, but instead this opportunity was wasted to basically have a dig at YouTube commenter’s.

Feig and the other writers have written great female characters, and as I previously stated, the movie is at its strongest during the more understated moments when the cast are allowed to riff off each other. These small windows into who the characters are fun, and give the movie genuine heart, and go a long way to making these characters feel like actual people, unless their skin colour is darker than beige. 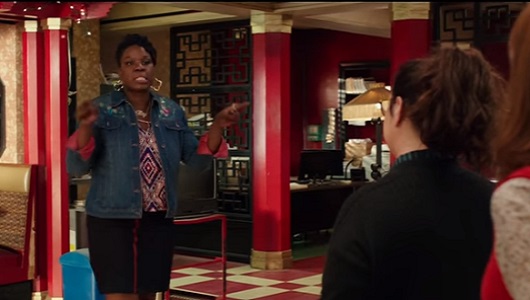 Maybe that’s the curse of the franchise. It’s a well documented fact that Ernie Hudson’s character Winston Zeddemore in the original movie was supposed to have a much larger and well developed role, but due to the blatant racism of 80’s Hollywood ended up being sidelined, with his role boiling down to little more than quoting the bible and smoking cigarettes.

I had high hopes that Feig and his team were going to rectify this with Leslie Jones’ character, and would write someone who didn’t fall into racial or gender stereotypes. That, sadly, is not the case. When it’s revealed that she has a deep knowledge of the history of New York, I thought this would give her character some depth, giving her a reason to be on the team. Instead that knowledge is used solely as an expositional device to explain why there are ghosts in that particular area.

There are rare moments where she is allowed to be understated and connect with the team in a real way, and it’s during these times that she shines. Unfortunately these moments don’t last long. It feels as if the writing team caught themselves out and had make her ‘loud and black again’ with all the character subtly of an Eddie Murphy movie, starring Eddie Murphy as the entire cast. The main reason she’s allowed to join the team in the first place is because she has a car. It’s a crying shame and a real waste of genuine talent, and speaks more about the movies direction than her skill as a performer. 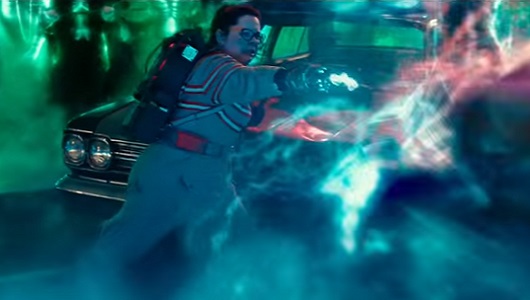 The CGI, too, walks the line between OK and Adam Sandler levels of bad. One scene in particular during the third act felt as fake as the Star Wars prequels at their worst, and really took me out of the moment.

Despite its short comings though, Ghostbusters is a good movie. It’s exactly what you’d expect from a mid-July blockbuster. It shines with genuine love for the original – even if it does rely a little too heavily on nostalgia to get that point across – and easily stands up there between the first two in terms of quality.

The real tragedy of Ghostbusters isn’t the fact that Sony decided to remake a classic from our childhood, it’s the fact that people will refuse to give it a chance because of ill informed and angry opinions online combined with there own sense of ownership to the franchise.

Kate McKinnon is amazing
Original cast cameos are fun
Chris Hemsworth
Some characters are poorly written
CGI is appalling in places
Not all jokes land, and some just become offensive

Ghostbusters is just a fun movie. It doesn’t do anything new or special, but it has as much substance as any other summer blockbuster and is definitely worth your time. It has teething issues for sure, but these are characters and a world I would love to see refined in a sequel, free of the expectations and pre-decided judgement of the internet’s vocal minority.

The author paid to see Ghostbusters