I can still remember reading a freshly bought copy of the CVG (Computer and Video Games) magazine whilst at school and seeing images from a brutal and bloody looking car racing game called Carmageddon. The name, the gory images and the big 18 certificate in the corner told me this is something my tiny, immature mind needed more than oxygen.

Despite this apparent need, it was years before I finally got my hands on it, at which point, we’d already had games like Manhunt to make us gasp in horror! When I found out that Carmageddon was coming back to consoles in the form of Max Damage, 14 year old me shrieked but supposedly adult me was sceptical. 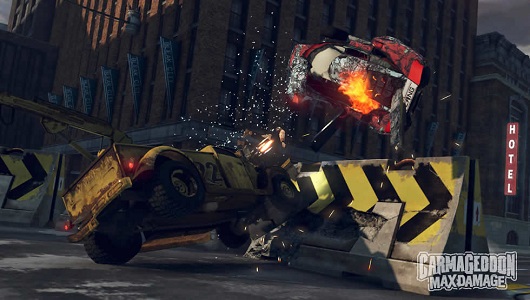 It turns out adult me probably had the right idea.

To start positively, Carmageddon has a large variety of modes to try out, from standard races to modes that see you chase down pedestrians with a pack of pursuing cars. This variety also spreads to the game’s environments. The cityscapes and arenas you are allowed to drive around are huge, with Freeplay mode allowing you to explore endlessly. 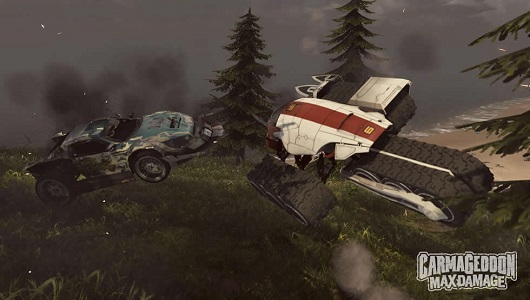 Unfortunately, the biggest crime committed by the game is one that sullies the entire experience. Driving around is simply not fun, largely due to the terrible controls. While the mechanics are standard enough, the fact that there seems to be a good half-second delay in analog stick inputs means you are already in the wall you were trying to avoid when the game decides to reflect your controller input.

This flaw alone taints the entire game as it is the primary gameplay mechanic. Despite this, you may find yourself getting used to, or compensating for the crap controls over time. However, after you do, that won’t help the other major issue in the game – the visuals. Carmageddon Max Damage is not a pretty game. It feels like a PS3 era title in terms of the geometry on display and the texture quality. While pristine graphical fidelity is not required for an enjoyable game, this just does not look nice at all. 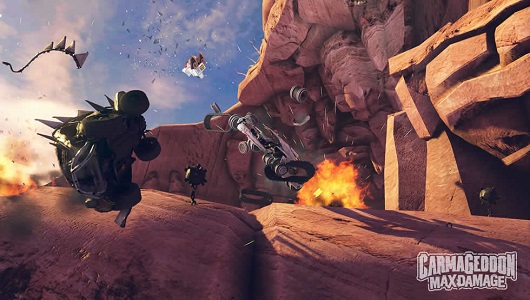 In events, the computer-controlled drivers are pretty terrible also. As you progress further in the game, they either act like headless chickens or they just try to ram you; with no other goal in their mind than trying to make you crash. This can be avoided by dipping into the online modes, which can be fun – but the lack of pedestrians seems like an oversight.

To stop this feeling too negative (as I did enjoy my time with the game occasionally), the physics and destruction effects in the game need to be praised. Slamming into other player’s cars and seeing parts fly off as you literally dismantle them is a joy. Added to this, there are a few power-ups that will bring a smile to your face, like an earthquake bomb or launched anvil. 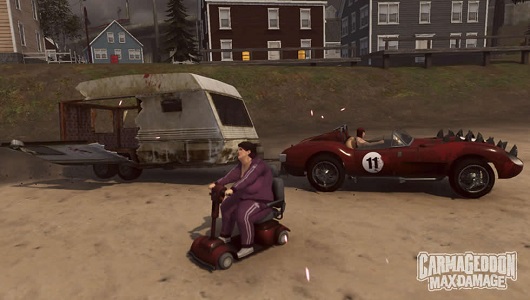 Many of the technical issues I have with the game could be alleviated by a patch so here’s hoping Stainless Games do right by the fans in this regard. Carmageddon, as a game concept however, has been iterated on already, either in the form of arcade titles like Blur and Split/Second (in terms of arcade destruction) or combat titles like Twisted Metal (in terms of vehicular violence). In the end, the biggest disappointment is the fact that Max Damage seems beholden to the original concept and doesn’t take into account the numerous advancements that have been made in the genre and video games in general. This is one title nostalgia can’t save.