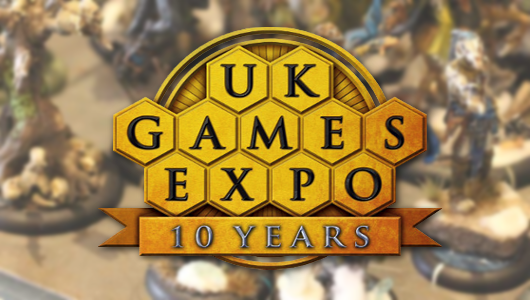 The Big Red Barrel team, now doubled in force as Tim joins Alex in the board game shenanigans, returns for the second day of UK Games Expo. Last time, we talked about some games we had a chance to play on the expo floor, today we played some more: 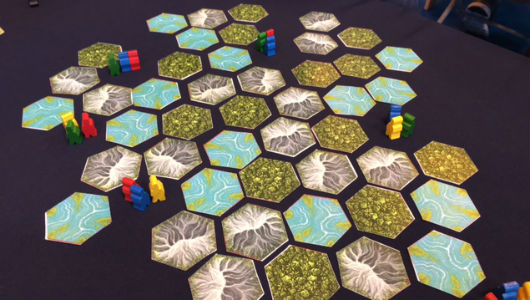 –
Cosa Rica is a family focussed, exploratory worker placement game (have we just made up this term?), where all player embark on an expedition to collect and rescue as many animals as possible from poachers. The board is made out of hexagonal tiles with terrain on one face and, a hidden from the player, animal(s) on the other. The tiles are revealed as the leader ventures forth, with the permission of the rest of the group, all in meeple form. The players have no way of knowing what animals will be revealed once the card is turned, however they could make a couple of assumptions based on the terrain. Toucans and jaguars prefer mountains, while moneys like forests and frogs like water.
–
The player collects as many cards as they dare to uncover. However, nothing is simple in the dangerous lands of Costa Rica. Some cards also have mosquito signs, collecting two of which takes that player’s meeple out of the group and makes them discard the cards with mosquito signs on them. Therefore, venturing forth is always a little bit the gamble. Also other members of the group might decide that the leader is being a little too perilous, and stop the leader progressing to then claim their animals for themselves instead. As the tiles are claimed by the players and removed from the board, it is possible for part of the land to become unreachable and a even for a group of adventurous to get cut off from a bigger area of tiles. This could be used to a strategic advantage, limiting the number of tiles available to the opponents and hence their scoring opportunities.
–
When there is no more land to explore, the game ends and the player with the most points wins. Collecting all the various types of animals earns bonus points, but getting a large group of the same animal is also beneficial.
–
I found Costa Rica to be very enjoyable. There is enough in the game to allow for multiple strategies and there is definitely a place for my favourite tactical move ‘let’s mess someone up!’. I am looking forward to the game coming out soon.
–
Codinca (previewed by Alex)
– 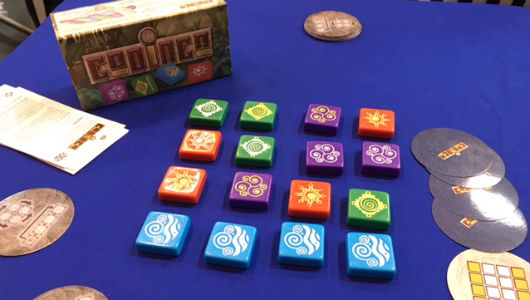 –
In the stone temple of the lost city of Codinca, there is a great treasure buried beneath the great altar. On it, there is a pattern of sixteen carved tiles, which hold the key to the treasure, if arranged in a correct sequence of four key patterns. Players, therefore, must compete against one another to be the first one to discover the secrets of the lost temple.
–
Codinca is a fast abstract board game, where players re-arrange the tiles in a grid to make to make the pattern outlined in their cards. All players have the same style of the pattern – diagonal, square and so one – however, each pattern has a variation of colours with some tiles white, while others are gold. Each turn the player can do two free actions available to them: swap their tile with one adjacent to it, or flip the tile thus changing its colour. There are also limited special actions, that can allow for additional special movements and switching of tiles.
–
In each game, the objective of the player essentially constitutes completing patterns in as little turns as possible, with other player unknowingly or on purpose impeding them, while trying to make their own patterns. With more players (maximum of four) it is harder to plan ahead, as even one change from an opponent can make drastic changes to the board, ruining any pre-planned arrangements. The two player game is generally less chaotic, and there is more opportunities to set up something a few turns ahead. All in all, Codinca is lovely colourful brains scratcher, with a simple yet enticing concept and gameplay.
–
Wibbell ++ (previewed by Alex)
– 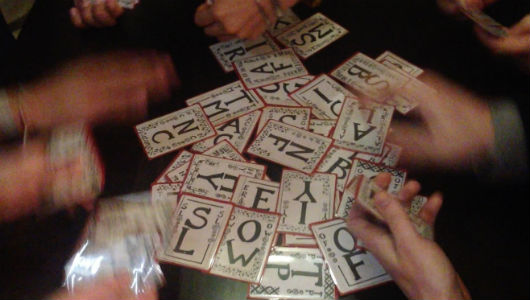 –
Wibbell++ is a game system, consisting of a deck of cards, with a pair of letters and a patterned boarder.  This minimal system can be used to play several different games. There is Grabell a dexterity pattern recognition game, in which players collect cards that have at least one thing in common, being it the boarder or the same top or lower letter. Faybell is a co-operative storytelling set up, while Phrasell is a party game, where players invent little phrases. At UK Games Expo 9 different games are available to play and, I won’t be surprised if more games followed in the future.
–
The game is still in its development stage, with final art still to come. However, there is something very compelling about its minimal, yet clear design, and the multitude of gaming opportunities it creates. The system is versatile enough to satisfy any kind of player or playstyle. Wibbell++ has been recently successfully Kickstarted and is set to be released around April next year.
–
Perfect Crime (previewed by Tim)
– 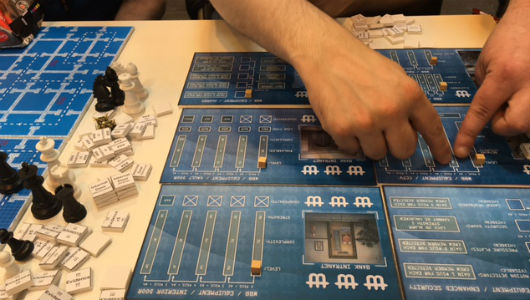 –
“To pull off the perfect caper we are going to need more than just perfect planning. It is going to take some fairly specialist equipment, a few extra crew members, perhaps someone on the inside and we’ll have to get ourselves organised before the bank can upgrade their security systems. From now on I’ll call you Mr Pink and you can call me Mr DeNiro. Right, let’s go to work!”

Perfect Crime tasks you and your friends with pulling off a bank heist. The only thing standing in your way is another player cast in the role of bank. The blueprint style board fits perfectly within the theme of the game and can be added to or built upon by the bank as the game progresses.

The final game will have a full campaign mode as well as one-off heists but this prototype version felt a little more balanced for the full campaign, but having only just started its Kickstarter, they seem well aware that some fine tuning still needs to be done. The final game will task the robbery team with stealing $1,000,000 – which will require them to commit multiple bank jobs and gives the banker more time to improve their defences. To win as the bank you have to eliminate all of your opponents or construct a number of special rooms before they can escape with all the loot.

Each turn the bank can invest in factors such as; more guards, better equipped guards, reinforced vault doors or upgraded security systems with items such as; better CCTV coverage, motion detectors or pressure plates. Guards are needed to monitor the CCTV system or walk patrol routes. All these systems are designed to help the bank to notice when the robbery is taking place and once a certain numerical level of Suspicion has been reached then more security options become available and eventually the police can be called in to apprehend the felons.

I had already invested in the Kickstarter for this game prior to playing – partly as I really like the theme and partly as the company that is producing this game have a good track record in Waggle Dance and Cornish Smuggler. While there is still a few kinks to be ironed out prior to launch my playthrough did reaffirm my belief that this has all the components to be an interesting and enjoyable recreation that helps capture all the fun elements of planning and executing the heist. I played the role of the banker and despite odds being clearly stacked in the favour of the robbers (especially once they had sent one of my guards home sick and bribed another) I still had a good time attempting to prevent them and look forward to the early release for good behavior later this year.