‘It’s Crusader Kings but in space!’ This is how my housemate excitedly sold Stellaris to me after he showed me the trailer. After a bit of time with it, I can say he’s both right and wrong.

Stellaris is the latest in a long line of grand strategy games from Paradox Interactive. The general gist behind making this one seems to have been ‘Well you kept asking for a space game so we made one!’ After predominantly making historical games (including the now legendary Crusader Kings II) props to them for this gusty move. Going (not so) boldly where strategy has gone before.

The set up in Stellaris is simple enough. You begin as a newly space-faring species, boldly exploring the cosmos. You start (in the default game settings) holding sway over just three stars with a science ship and a research ship. As always with Paradox games the tutorial is rubbish; this has less to do with the tutorial itself being bad and more to do with the fact that the games themselves are so complex. Have the wiki to hand.

I have to be honest here: there are a lot of broken things in Stellaris. As many reviewers and friends have said already, the mid-game sucks. There are certain features that are needlessly obtuse and a bit wonky. However, a lot has gone into streamlining many of the systems from earlier Paradox games. Like a fine wine, these games get better with age, as the developer’s patch and tweak. In a year’s time I will probably be able to recommend Stellaris wholeheartedly. Right now though, my endorsement must come with some caveats.

I thought I’d make it difficult for myself so I went with one of the pre-generated species, the Chinorr. Like the various characters in Crusader Kings II, the species of the game have different traits that confer modifiers on everything from resource production, population growth and diplomatic relations. For example, the Chinorr being molluscoids (think Cthulhu spawn, but benevolent scientists) meant they had the Repugnant trait which reduces other species happiness. There’s also the option to create a species from scratch, which is great fun: my reptilian religious zealots, the Kutharians were a particular highlight. The species also come with various methods of interstellar travel: warp, hyperspace or wormhole. 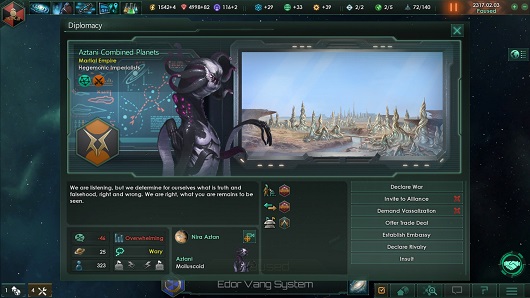 You’ll divide your time in Stellaris between some standard grand strategy activities: colonising planets, interspecies diplomacy and constructing fleets. There are also various events that can trigger larger chains of story based happenings: my accidental destruction of an ancient crystalline entity for example.

Many systems have been streamlined to make play easier and more enjoyable. Early game, when colonising, each planet has a surface divided up in tiles that you can build on to generate certain resources. You’ll micromanage fairly intensely in the first part of the game. Paradox recognise that later on that kind of micromanagement becomes boring so the option to create sectors: parts of your empire that are autonomously run by AI is a welcome addition.

Unlike Crusader Kings you aren’t playing as individual characters. You’re roleplaying an entire empire instead. I played the Chinorr Stellar Union as a bunch of socialist explorers, sticking their tentacles into whatever avenue of discovery they could find. They held elections for new rulers in a direct democracy. The empire next door however, was a military dictatorship, massive and intimidating, gearing up for war. The neighbouring empires had formed an alliance and whilst previously rejecting me (like the ugly squid I am), they panicked at the size of the dictatorship and asked me to join for support. We’re currently massing fleets to stand up to the space bullies. There are individual characters, but you recruit these to run certain parts of your empire: researching new technologies, commanding a fleet or governing a sector. They have one or two unique traits but are nowhere near as distinctive or important as your character in Crusader Kings II. 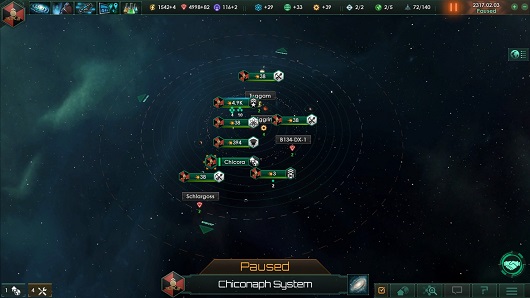 The roleplaying aspects is where you’ll have the most fun. Early on in my game I discovered an Industrial era species who hadn’t made it off their home planet yet. I went down there and showed them my wondrous space goodies and quickly they were uplifted into a spacefaring civilisation that became a vassal of the Chinorr Stellar Union. Of course they weren’t too happy about my bossing them around so I gave them their freedom. And then they waged a war against me. So I crushed them. So ungrateful. But the point is I was forced to consider my civilisations motives. I didn’t want to crush them. I was supposed to be their benevolent mentor! The game forced my hand and created a new experience.

Graphically it’s nothing to write home about, but of course that isn’t the focus. The developers have quite clearly gone down the same route as the Ubi Art engine games. A lot of the assets feel  like gorgeous concept art that has been used transplanted into the game proper. The alien races in particular, are fantastically illustrated and then brought to life using a few subtle animations: the clicking of mandibles of the ruffling of feathers. Zooming in and out of space is spectacular; going into the galaxy map reveals the true scale of the region of space the game focuses on. The default game size is six hundred stars. Whether you aim to conquer it all or peacefully co-exist is up to you. 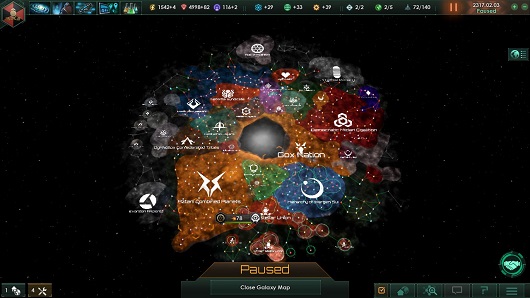 Customisation options run pretty deep as well. Apart from the already mentioned species customisation, the ship builder allows you to fit various modules as you unlock new technologies. Better lasers, new deflectors, that sort of thing. You can also enact edicts on your civilisation as well. These are Stellaris’ version of laws: you can suppress media or free slaves etc. The option to customise your laws, like in Crusader Kings II is possible but is likely to upset someone and change their standing with you. All of this is done with a resource called Influence, which represents your political clout in the game.

Influence was one of my major problems with the game. As the tooltips points out, Influence gain is supposed to remain pretty uniform throughout the game: you get about +3 a month. However, many basic things require, say, one influence a month to maintain: frontier outposts, which let you claim territory and resources, for example. As a whole then, this restricts your growth as it limits how much territory you can claim. It severely dampened my enjoyment. I couldn’t claim new territory, which meant I could get the resources I needed which in turn meant I couldn’t generate more Influence. Whilst tying your political power to a tangible resource is a clever system, it needs tweaking in order to prevent the midgame slump Stellaris so badly suffers from.

All of this comes back to my original point. Paradox games get better with age. The first big patch is already out (1.1 is named Clarke to be followed by an even bigger patch called Asimov) and comes with a huge barrel of improvements and additions. Paradox have already made clear their commitment to improving the midgame and ironing out some of the more obvious niggles and gripes.

If you enjoy grand strategy games, you will enjoy Stellaris. I did enjoy it: but I think that given some time it will become a truly special game.