The newest game to blend minimalist ultra-violence with a dark, twisted hours of story and  tons of replayability, following in the footsteps of Hotline Miami, Superhot is an exciting new title from a fledgling indie studio.

You’ve no doubt heard by now that Superhot is the most innovative shooter anyone’s played in years. And although I think anyone might be hard pressed to argue the point about the innovation, i think i’d argue against the shooter description. Superhot is a puzzle game that uses the FPS presentation to give players an more accessible entrance way into what could be some quite complex mechanics.

The game has two major components, the story mode and the endless challenge mode you unlock for completing the story. The campaign asks you to step into the shoes of a nameless computer having person, gifted a copy of the mysterious program known only as Superhot.exe. What initially seems like a harmless game turns out to be so much more. Possibly. The story is equal parts Hotline Miami The Matrix, and the Psycho Mantis boss fight from Metal Gear Solid, as your player character sinks deeper into a world of intrigue and stylised violence. Using one of three firearm types, and any object that you can lift and chuck at the oncoming ‘red dudes’ as the game’s enemies are known, you’re tasked with clearing each level of enemies before being whisked off to another scenario to rinse and repeat the bloodbath. Although the campaign only lasts a couple of hours, and so doesn’t quite have the opportunity to exercise the depth of the aforementioned titles, it still does enough to leave you doubting your own sanity, and if you can complete the final mission without the hairs on the back of your neck raising even slightly, then you’re made of sterner stuff than I. 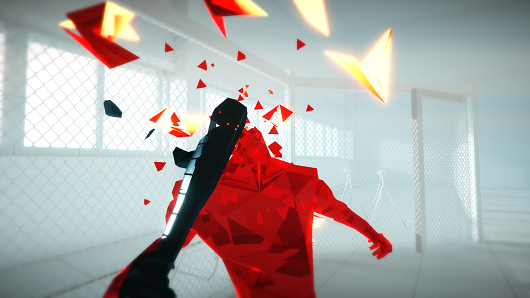 I guess that’s what you call a splitting headache! Haha… I’ll see myself out…

As I mentioned above, the mechanics of Superhot are complex, but expressed thorough a very simplified medium. See the red guys, shoot the red guys, don’t let the red guys shoot you.  All of the enemies die in one hit, but so do you. Luckily the game takes inspiration from Hotline Miami in more ways than one, and so you can restart the level instantly on death by hitting the R key. It makes what could be a an infuriating insta-death system and turns it into just another mechanic. Encounters play out almost exactly the same way each time so you can rinse and repeat strategies over and over until you find the one path through the level that works. And what’s intriguing is that there’s definitely more than one way through, but each solution you find feels so perfectly satisfying that you’ll swear the outcome was set from the start. At the end of each level you’re treated to a replay of your winning attempt, and can choose to upload them to the game’s built in sharing feature, Killstagram.com.

Stylised is probably the quickest shorthand for the design of Superhot, as all the levels have simple, stark white backgrounds, the enemies as previously mentioned are red polygonal figures, and all the objects that you can interact with are black. Black, white and red is a little bit of a cliché at this point, but the emphasis on polygonal shapes does something to elevate it above the norm in particular the crimson bullet trails that hang in the air behind the frozen bullets add slashes of colour to the otherwise virtually monochrome levels. the sound design is rather excellent, with the highlight is definitely the breaking glass sounds that crash through your speakers every time your bullets turn an oncoming foe into a shower of fractals. It worth mentioning however that towards the end of the game thre are some sudden random bursts of white noise and distorted sound. I’m almost certain that these are supposed to be there, but I still found it rather off putting, so anyone with sensitive ears should probably turn the volume down towards the end of the game. 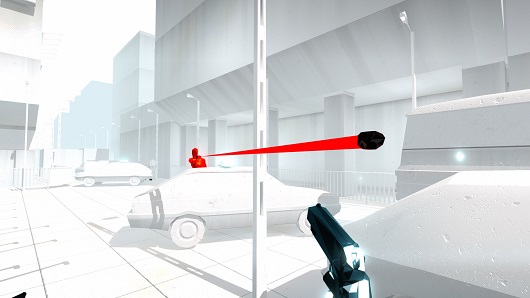 If you can see this, you’re probably dead. But only probably.

There’s not a lot to dislike about Superhot, although I fully concede that the visuals may not be to everyone’s taste. And although the mechanics of the game function nearly flawlessly in a wide variety of situations, and are robust enough to support and occasionally reward getting creative with the laws that it sets out for you. A single exception to that is the way that objects will occasionally shatter against a single pixel of a wall or other nearby obstacle that the hitbox might move against. It’s not a common enough problem that it’ll ruin your enjoyment of the game, but it does provide a headache that the game could really do without.

Superhot is a riddle wrapped in an enigma inside a box made of confusion slow motion violence. But despite having enough cyber-philosophy to give the Wachowski sisters a migraine, it never outstays it’s welcome and never falls into the trap of basking it’s own cleverness. instead it keeps itself a compact, perfectly formed experience. If you only play one turn based first person shooter with highly polygonal character models this year, make sure it’s this one. I mean, you don’t really have many options, but it’s still very good.