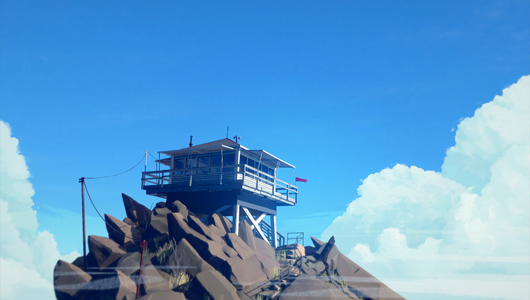 In its pre-title card prologue, Firewatch asks you to fine tune the details of our protagonist, Henry’s, life via a ‘choose your own adventure’ style text screen. While the choices begin as fairly arbitrary and fun, like picking his opening line to his future wife or what dog to adopt, you’re soon left dealing with far less pleasant dilemmas. Whatever path you choose, it inevitably results in Henry taking a job as a fire lookout in Shoshone National Forest, as is predicted by the short interspersed gameplay. These segments see him trekking deeper and deeper into the forest in search of his lookout post. It’s a self-medicating escape from life in job form, that’s probably second only to the winter caretaker job at the Overlook Hotel in terms of isolation and potential for drama. 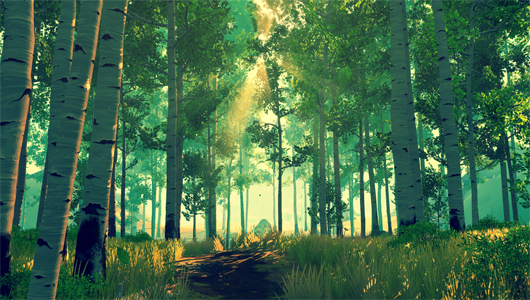 This powerful and succinct opening is surprisingly moving and had me deeply invested in the character before the game had really even kicked off. After the prologue melted away, I was excited to get stuck into to some introspective soul searching and exploring. But when I eagerly prompted Henry to grab his walkie-talkie from its base before the game had actually asked me to, it simply disappeared. I was left stuck in idle-animation purgatory as Henry literally twiddled his fingers and gazed off over the rocky mountains, and presumably would have done so for all eternity if not for a forced reboot. The glitch made short work of undermining the effects of the atmospheric introduction, and I was dragged out of this rickety watch station overlooking vast expanses of untamed, rugged wilderness and back to reality.

Luckily, despite the PS4 horror stories I’d heard, aside from a few minor frame rate dips, this was the only technical issue I ran into, and rebooting only lost me about two minutes of progress. But this process of a touching opening that strung me along with ease to later be mildly marred by the harsh realities of game construction had summed up Firewatch quite well without me even realising. It’s a beautifully crafted and immersive character driven story with just a few fine-tuning tweaks that niggle but don’t affect the overall experience much more than occasionally breaking the spell.

And so, we slip into the hiking boots of Henry as he attempts to escape the unhappiness of his domestic situation in the depths of the rocky mountains. His only connection to another human being is the aforementioned two-way radio that links him to his supervisor Delilah. She’s a comforting presence whose own watch tower can occasionally be glimpsed amongst the distant peaks. Her first question for him is ‘So, what’s wrong with you?’ The suggestion here is that no one of sound mind would ever take such a position. And throughout their meandering conversations that define Firewatch’s tone, we learn what’s wrong (and right) with both of them, and they’re both triumphs of character creation and development. Henry is, allowing for one or two play choices, earnest, self-deprecating, and very funny but with more than a hint of tragedy and self-pity. As much as you hate to admit it, he’s a bit of a loser. Think Nathan Drake if he had pursued an office career instead of exploring and was on the other side of an ego-trampling divorce. And aside from the occasional glimpse of a photo or sketch, we’re able to piece together our impressions of him; from the chunky sun-burnt legs that he hoists himself over a ridge with, or Delilah’s laughter over the radio as she comments on his choice of attire. It’s the details that are telling, and he’s certainly no Bear Grylls.

Delilah on the other hand, while similarly disillusioned with life, is crass and assertive but kind, and probably enjoys a drink a bit too much. They’re both engaging, interesting, funny, multifaceted and most importantly, believable, thanks to the fantastic voice acting and perfectly tuned dialogue. I found myself using any opportunity to prompt a conversation as I wandered hither and thither. 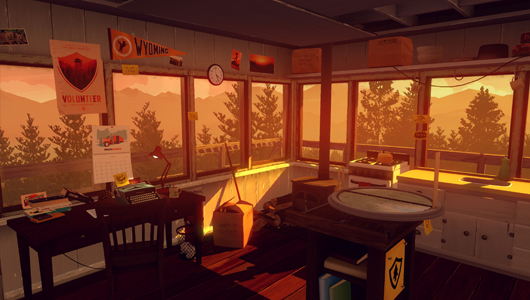 But Firewatch isn’t all deep and meaningful self-reflection and ‘getting back to nature’. There’s a mystery afoot. And there’s very little that Henry does that doesn’t revolve around the plot’s central narrative as the game skips from days to weeks, only stopping on points that move the story along. Surprisingly, there’s very little fire-watching involved. The ‘firefinding’ contraption at the centre of Henry’s cabin which I though much of the gameplay would revolve around is a bit of a red herring.

It could have been an interesting addition to the game to have more of a job-focused element that would highlight just how isolated Henry was, and for how long. Instead, every time I saw a ‘Day X’ title card, I knew the following events would involve something significant. It is an odd criticism, but in the long term, more meandering days spent gazing off into the horizon with no real aim could have really amped up that sense of oppressive cabin-fever. As it is, Firewatch could probably fit comfortably in the walking-simulator category. Each day Delilah sends Henry off on the trail of a thread from the growing mystery, and these are laid down thick. There are missing girls, mysterious torch wielding strangers, a rogue bear, vast areas of park fenced off for sinister and unknown purposes and severed power lines that soon spiral into a paranoia inducing conspiracy with Henry and Delilah at the centre.

The fantastic location strengthens the narrative, despite being relatively small for an open-world map. The beautifully stylised flat cell-shading gives an extraordinarily dreamy, romantic-adventure quality to the surroundings that are a joy to get lost in. The orientation devices are authentically hands-off with no path finder AI to escort you, just a compass and map that show your position and a vague idea of where you need to be. I often challenged myself to try and reach my destination using nothing but the compass provided, just to see if I could (though I discovered later that you can actually turn off you location setting on the map – and I’d highly recommend it for the true boy-scout experience). Though what started out as wide-eyed wonder soon turned into feverish anxiety as the plot thickened. Suddenly I was jogging everywhere at a steady pace rather than strolling and absorbing the atmosphere. Every time I hitched a rope to abseil or climb I was half expecting the line to be severed as I leaned off a cliff face, and despite the distinct lack of physical forms in the game I was continuously scouring the tree line for shadowy figures. At the height of my paranoia I even began using the disposable camera you happen upon to ‘document evidence’ as I called it, rather than the dozens of Instagram worthy scenery moment. Just in case. This is not a horror game, but on several occasions I found my heart rate rising far above what was comfortable. 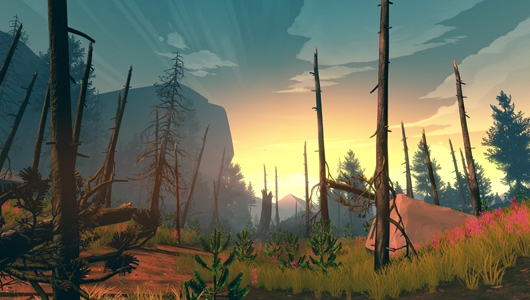 However, as with many a mystery, the risk is always that the reality will stop far short of what the onlooker was hoping for. And without wanting to spoil anything, the conspiracy at the centre of Firewatch casts an awfully big shadow, but maybe that’s all part of the exercise of overblown paranoia. Those who pay close attention to character subtext will reap the most from the big reveal. In fact full disclosure; I had to visit a few forums before every aspect made sense to me, so attention and close scrutiny is key. The ending also sneaks ups fairly quickly to cap everything off with relatively little fuss and no real sense of closure. But, as a study of characters and life in general, more often than not there are no black and white 100% satisfying conclusions. Though the multiple save files in the menu did leave me to believe the game would be more long winded. As it is, its 5 or so hour playtime can be taken care of in one fairly determined sitting.

Altogether Firewatch is a wonderfully immersive, visually stunning and engaging character study thats conspiracy-mystery plot, though fun and atmospheric, isn’t what you’ll walk away remembering. You’ll probably find that wandering through an idyllic patch of woodland while listening to Henry and Delilah’s good natured banter tops any of the bigger spectacle moments that could be argued fall a bit flat. But that’s exactly what I loved about the game; big concepts, scenery and ambitions, but defined by the smaller interactions, that by far outshine any technical or structural shortcomings.