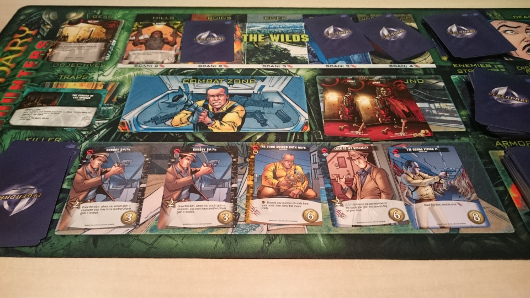 Legendary Encounters: a Predator Deckbuilding Game (hereafter Legendary Predator, because that is a ridiculous name) is the latest release in the series of Legendary: “Something” deckbuilding games that started with Legendary: A Marvel Deck Building Game (see Tim’s review here, and I will refer to it as Marvel Legendary for similar reasons), this time drawing on the two Predator movies.

As with most deckbuilding games you start with a small deck of weak cards, in the Legendary series they give you either a little money to buy more powerful cards or a little attack power to fight the enemies. As you acquire better cards you add them to your deck so that as you play through all your cards and shuffle your deck to start again you make your deck better bit by bit. 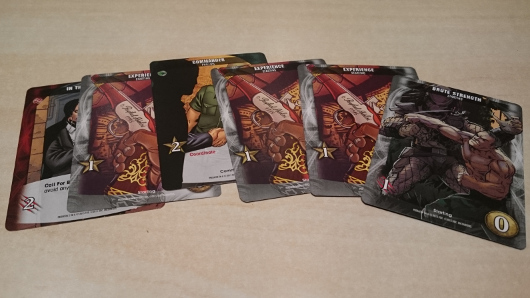 Marvel Legendary is one of my guilty pleasure games. It’s not the best game ever, but I have a blast every time I play, so I was pretty excited to try Legendary Predator. The basics are very similar, you start the game weak and build up the strength of your deck to take on the tougher and tougher enemies. The Predator version of Legendary has two modes of play. One is entirely cooperative where you play as the Special Forces team, you work together to beat a semi-programmed deck of enemies and it has some tweaks over the Marvel version to make each game tell a more cohesive story. The other mode has you play as Predators directly competing and this plays more similarly to the original Marvel version.

However despite all the improvements I would still rather play the Marvel superhero version of Legendary over the new Predator one. A large part of that just comes down to the fact that I prefer the superhero theme, despite the fact that the theme is far better implemented in the Predator version. But if you prefer the Predator IP, or don’t have a preference either way this shouldn’t bother you. 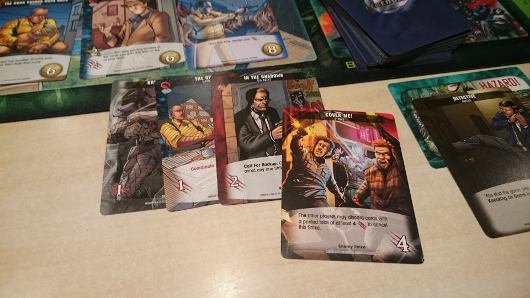 The second problem that might not bother you is the artwork. Legendary Predator definitely has some fairly gruesome art, as you would expect, but worse a lot of the art just doesn’t look very good. When opening the game for the first time, excited to play, I flicked through the cards and suddenly just wasn’t as interested. Admittedly this is a pretty shallow reason to be disappointed with Legendary Predator.

The more problematic feature of Legendary Predator is the reduced variability of the game. One of the great aspects of Marvel Legendary was that it gave me a toy box of superheroes and villains so that I could play out my own stories.  Each game played pretty much the same, but it felt like I was playing a different story each time. 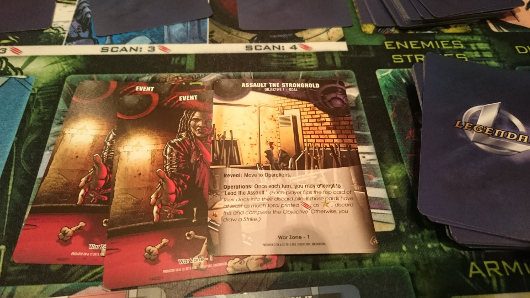 In contrast the Predator version tells a story that follows the plot of the two movies very much more rigidly. The enemies, hazards and objectives are packaged up together into specific modules that act as a beginning, middle or finale. This creates a story with a clear narrative arc, but it is the same story each time. It also stops you being able to mix and match the enemies and objectives to create your own “what if?” scenarios, although you can interchange the modules from the two movies. Ultimately I got bored with playing the same module to start each game, as that meant I kept seeing the same enemies over and over again.

Tells a great story
Cooperation between players feels good
Games start to feel samey after a few plays
As with all Legendary games, set-up and clean up is a pain

Legendary Predator is still a fun game and the iterations and improvements over Marvel Legendary make it a better cooperative game and more thematic (I’d even like to retro fit some of them if possible…) but I just didn’t have as much fun playing it. So ultimately I’ll stick with the superheroes, and I don’t think I need both. But if you love the Predator IP or hate superheroes this could be the right Legendary game for you.