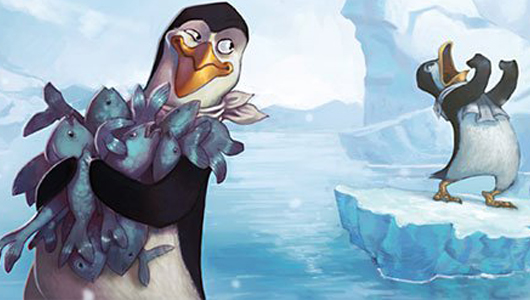 As an adult board gamer, ironically, I get asked one specific question a lot: ‘What is a good board game for kids?.’ At first I panic, my brain unhelpfully thinking of the games on the completely opposite end of the spectrum, Blood Bowl Team Manager Card Game, Gloom, Eldrich Horror. Realising what is going through my head, makes me panic a bit more. ‘But you play a lot of board games, you must know some!’, the person insists, slightly disappointed now. While, correct, I do play quite a few board games, I tend to play them with adults, in a bar, while sipping beer and making silly innuendo jokes. If I was presented with a list of game from Kinderspiel des Jahres (an award for the best children’s game akin to Spiel des Jahres), I would probably not know a single game on that list.

However, the question persisted, and I felt more guilty the more it was asked, so I had to rectify the situation somehow. The solution would hopefully avoid me playing and purchasing board games that were not aimed or designed for me. As it turned out, thankfully, this was an easy and enjoyable problem to solve because there are quite few board games that are fun for both adults and children. Among them there is a game that I now recommend in half a heart beat – Hey, That’s My Fish!

Hey, That’s My Fish!, and yes, exclamation point is mandatory, is a great game for many reasons, but a big selling point for me, is that it can be enjoyed by anyone – children, adults, experienced board gamers, new board gamers, people who don’t have time to play board games, penguin lovers and fish haters. Personally, I play Hey, That’s My Fish! as a warm-up game, something fast and fun, that will get people in the mood for board games and help to relax the group.

The games is based on a randomly arranged grid of hexagonal tiles, where each tile has either one, two or three fish on it. The player controls penguins, 2 each in 3-4 player game and 4 each in a 2 player game, which can move around the board in straight lines. As soon as the penguin leaves the tile it is on, that tile is removed from the board to be collected by that player. At the end of the game, the player that has the most amount of fish wins. Also, congratulations, you have just learnt the rules for Hey, That’s My Fish!. 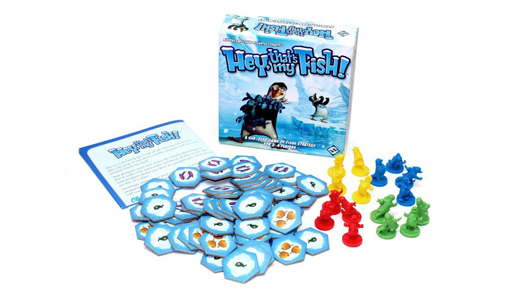 The game will take at the most about 15 minutes to play. As soon as penguins have ran out of tiles to go to – they can’t jump over the gaps on the board – the game is over. Setting up the game is also very fast, the most laborious part of it is arranging the tile grid, but that at most takes a few minutes. The short time it takes to play is partly the reason why this game can be quite addictive.

The other, and bigger part of why this game is addictive, is that it is also incredibly competitive and strategic. Players are confined on the same, relatively small grid, and there is only so much fish to go around, and even less tiles with three fish on them! You would want to cut away your competitors from the fish tiles, leaving them stranded in the cold sea on their little frozen island, unable to reach any more fish. As the game is fast paced, and the repercussions of the actions are almost immediately obvious, it is too easy to play just one more game to recuperate from a stupid mistake made previously, or win by even more fish!

Many adult board gamers have been discourage from the game by its theme and art style. It is, indeed, very cartoon like and has cute penguins. Clearly, this aspect of the game was designed to appeal more to younger audiences. While I do understand the appeal of the artwork, there are quite a few games that get extra love from me for their art style alone, in the case of  Hey, That’s My Fish! the board game should not be judged by its cover or theme. It is the robust and solid mechanic of the game that drives its replayability and, ultimately, the enjoyment from the game. The penguins and fish are just one of the possible skins. Granted this one works very well, but getting rid of cute penguins would not have any changes on the gameplay. As for me, the art style of the game left me indifferent. I don’t hate it, but I don’t love it either, but then, again, this particular aspect of the game was clearly not aimed at me. 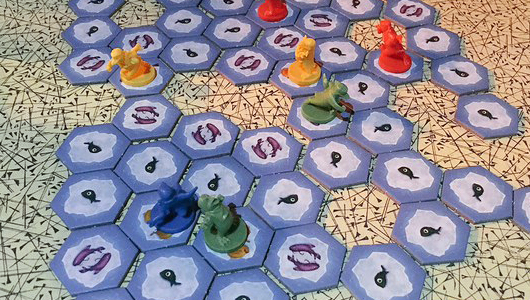 There is one little, super nit pick-y, annoyance that I have with the game. While it is great, that the grid can be laid out on any relatively small surface, and then you are ready to play, picking up one hexagonal cardboard tile from the centre of the grid is almost impossible without skewing the whole lot of them. Now, I will fully disclose that my OCD and clumsy fingers are also partly to blame for this problem. Nevertheless, the grid and the location of the tiles are important to the game. One lousy lifting of the tile and the whole arrangement is messed up and has to be re-created more or less from memory. If there was a version of Hey, That’s My Fish! with pre-punched grid where chunkier, almost Hive like, tiles slotted into the grid, I would get that game in a heart beat.  This, however, would also make the game that much more expensive, where as currently it has a very attractive price point of just under £10.

Board Game to be enjoyed equally by adults and kids
Simple, quick rules and minimal set up time
Incredibly strategic and competitive
Hexagon grid is very easy to mess up

Hey, That’s My Fish! is a great, incredibly simple, yet also undeniably fun board game. It might not occupy me for hours and days at the time, but I do return to it again and again for a quick game. It is also a game that can be equally enjoyed by adults and kids, which is not an easy game to design.