I don’t even know where to start with this review, from the offset the premise of a game where you play a Coast Guard is a fairly niche concept, but it grabbed my attention. These niche market titles are always interesting, whether because it nails the subject matter, or is so underwhelming that it borders on the awful. Coast Guard certainly fits within that spectrum, but at which side?

I’m in a difficult position right now – I go over my experiences in my head and end up finding more and more that I dislike about Coast Guard. Whether it’s the inconsistent story telling, poor performance or lack of clear direction, the game is tedious experience and it’s a struggle to get through. Some will like the murder mystery elements, but when you get into deep into the mystery, something smacks you out of the experience. That is the core of the problems I have here, the moment I started to enjoy myself, a huge flaw or inconsistency frustrated and alienated me from the experience.

You play as Finn Asdair, the coast guard officer leading a crew on the high seas. The introduction to the characters is simplistic, but over plays and insists on including character names in every line of dialogue. This is just the start of lazy and poor story telling. Instead of having characters’ build on a foundation of interesting characteristics, they’re generic with no motivation or personality. There’s only so much “Finn, look over there.”, “Finn, good work”, “Good job Finn, you deserve a medal” I can hear in a short amount of time before I just give up. I got it pretty quickly, the character is Finn and is good at his job. Instead of insisting that through dialogue, let me feel it. 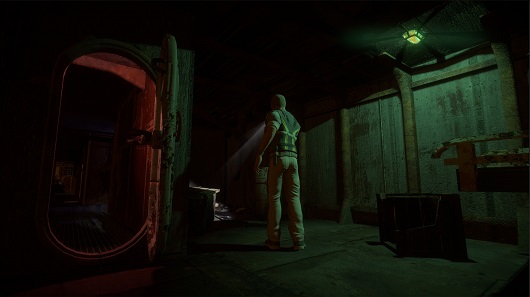 That’s not all – you get caught up in a murder mystery where you have to interview workers at an oil rig. It plays out like a normal murder mystery game so that’s not overly surprising. The frustrating part is the interviewing of workers is lifeless. Again the characters have no discernible personality traits or are heavily stereotypical foreign characters. This wouldn’t be terrible if the writing and voice acting was any good, unfortunately not mind. There really isn’t much to enjoy while walking around a lifeless, poorly textured environment which is filled with boring and uninteresting characters.

The conversations you carry out are multi-choice which is nice, and progression from point to point is generally fine – there’s a few issues with repeating questions and a heavy insistence on trial and error. One conversation piece doesn’t work, ask the question again and alter the conversation to a different response and you achieve your objective. I had a moment where I knew who was involved in one part of the mystery, had the evidence, got verification from one character, but the following character kept repeating their response. Despite the previous verification, I couldn’t use that to build my case, leading me to wonder what the point of that information was. It’s generally a poor experience with far too long asking the same few characters the same questions over and over again until you finally asked the right one of five to one of the four characters involved. That wouldn’t be the worst thing if some of your crew members gave any insight, rather than standing around saying they didn’t have anything. The hint system also didn’t help, telling me to figure something out when I’d already figured it out.

The murder mystery and the searching and collecting of clues is also frustrating, with clues being in random places, with no help or hint given once again – so the location of clues didn’t make sense. I’ve spoken a lot about the murder mystery elements, but that’s not the whole story, and not even the main part of Coast Guard. 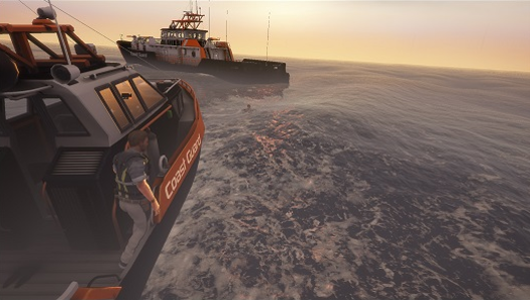 There’s plenty of time spent on the water, saving people in the water, checking water samples and chasing down ships. I was hoping this would be the positive part of the review, unfortunately not. Sailing the ship around the high seas is a chore more than a pleasurable experience. Water clips through the boat as you bounce along the waves, and it doesn’t look particularly great.  There’s no controls apart from forward, reverse and turn. I was hoping for something with a bit more finesse and control. This means a lot of the time you’re just holding accelerate and turn for a majority of the time. I often found myself fighting with the ship when trying to rescue sea stricken individuals, but the AI meant they sat in the water, not moving closer to the boat when circling around, meaning you often ended up running straight over them with your ship. It’s really frustrating, especially in choppy waters, which in a way is a positive. The lack of boat controls means there’s nothing to master or learn, but the weather conditions really affect the way the boat handles, which is nice.

There are a couple of positives, even though the negatives out weigh them. There’s plenty of camera angles to marvel at. The Mother boat has a couple of nice features, and is roam-able, with the daughter boat being a nice variation with a different speed and set of features. There’s a general concept here which seems good, but the implementation is disappointing. There’s too much switching around a supposed timeline of events, with the game dragging you back to a ghost ship mystery which Finn is stranded on.  It’s a momentum killer for sure, but that’s a very small problem. 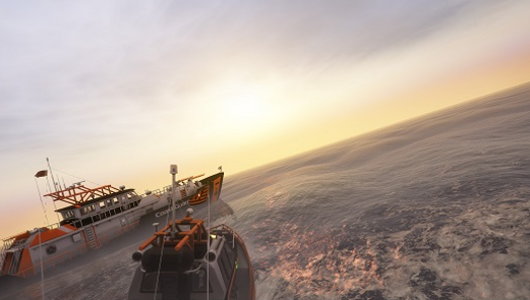 The concept of a ghost ship, flashback murder mystery which goes from 0-100 instantly is quite appealing. The idea of sailing on the seas saving stranded people, solving crimes and completing missions is something I didn’t know I wanted, it’s a shame then that the experience I got was so lacklustre. There’s so many things going against it, the storytelling, the voice acting, the pacing, the controls and I could go on and on. It’s certainly not the worst thing I’ve ever played, and it’s definitely not a recommendable experience, even if the concept interests you. Unfortunately, Coast Guard really is on the “awful” end of the niche game spectrum.