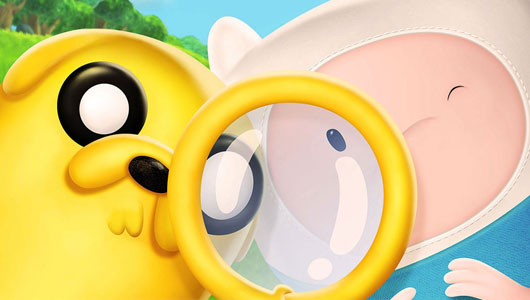 Adventure Time was once the territory of its intended demographic and only the most irritating contrarian animation-hipsters who militantly insisted on the ‘multi-leveled plot maturity’ and ‘complexity beyond the grasp of the supposed audience’ (obviously I’m including myself here). It has now reached a zenith of commercial popularity, easily one of Cartoon Network’s most lucrative IPs it has had its merchandising potential mined to exhaustion; you only need to go as far as your local Primark to pick up a pair of leggings with Lumpy Space Princess printed all over. So, inevitably we’ve had a slew of varying quality but never overly impressive cross-platform games. Adventure Time: Finn & Jake Investigations is the latest. 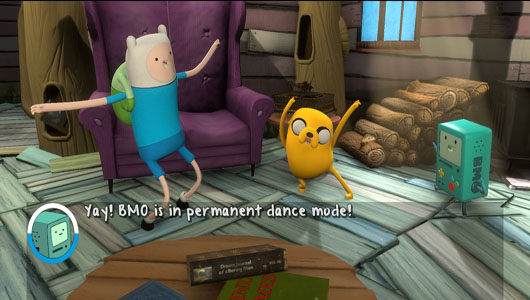 For those familiar with the show, the game follows the structure of a ‘Graybles’ episode, i.e a series of shorter adventures that are connected by an overarching theme and narrative. How this translates to gameplay feels like a cross between a Telltale title and an entry from the LEGO franchise with less satisfying mechanics, with a heavy emphasis on point and click style puzzle solving in an episodic structure. Taking on the role of Finn with his magical dog companion Jake in tow, you explore various locations collecting and combining evidence and talking to characters in order to solve the mystery at the heart of each episode. It boils down to formulaically attempting to combine everything in your inventory and then using it on every interactive surface of the game. It does have a lot of fun Eureka moments, but sometimes the logic is painfully unintuitive. For example having Jake as a puzzle-solving tool is an obvious move that works well with the format, but it’s irritatingly short sighted when he can be used to lift you on top of a roof or pull items from trees, but not to bridge a one-step gap on a flight of stairs. 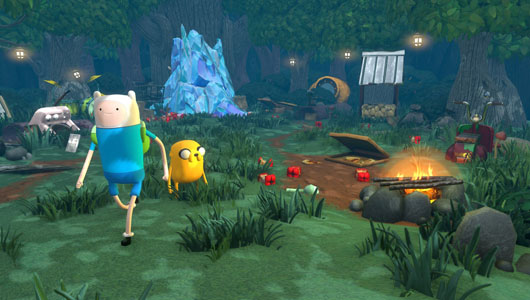 There’s also a crowbarred in combat aspect that did nothing but leave me dreading when it would next crop up. Dull and repetitive, it essentially requires you to hammer the attack button to defeat a collection of bland interchangeable enemies. You periodically get a sword upgrade with it own special ability and after a combo chain you can team up with Jake to perform one of a selection of combined moves which change it up a little, but it still leaves the sections feeling like an absolute chore. You’re also encouraged to replay these parts, but I really struggled to see why I would ever want to, as it never provides any bonuses or upgrades, regardless of how well your perform.

The Technicolor ‘Land of Ooo’ does lend itself well to 3D realization, with lots of nods to popular haunts, such as the Candy Kingdom, Finn and Jake’s treehouse and Lemongrab Castle. It’s just a shame that they feel quite hemmed in. By the time you reach the fifth episode of the game, it’s made up entirely of revisits to previous locations and characters. 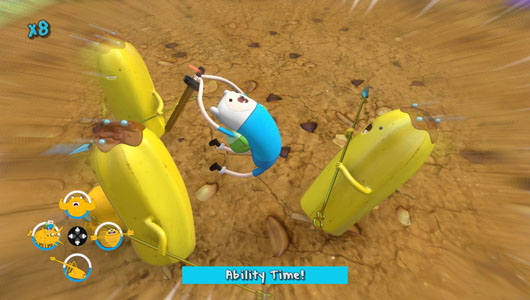 For a very short game – each of the five episodes last around an hour- it feels tediously slow. The fully voice-acted interactions are certainly a highlight, boasting the complete roster of favourites, but they often feel painfully drawn out, with stiff awkward pauses, forced dialogue trees and generic reaction animations that leave Finn gurning like an Aardman creation at every interval. While the conversational writing more or less fits what’s expected, the narrative script suffers heavily from a drop in quality. One of the franchise’s merits has always been its Trojan-Horse approach to delivering deep, sincere and occasionally disturbing content under a heavy layer of cartoonish abstract humour and frivolity. Show subtext highlights have involved Lovecraftian alternate dimension apocalypses, parental abandonment, fatalistic prophecies, amputations and a less than subtly-implied lesbian relationship. But everything in Investigations is at a purely surface level and never elevates beyond standard pre-teen fair. Of course, I’m aware of just how entitled and demanding I’m being of a game that’s story is perfectly suited to most of its target audience. So just take it as a fair warning that those looking for the same challenging and engaging writing that made the series so loved amongst twentysomethings and beyond will most likely feel let down.

Adventure Time: Finn & Jake Investigations has its moments of fun and compelling puzzle-solving gameplay, but overall it’s simply too bland an experience and it fails to represent the quirkiness and complexity of the beloved show. The simplistic combat, narrative and overall brevity will suit younger fans or the very casual player perfectly, but the overall superficiality of the writing and lack of a real challenge will disappoint others. And those needy, existentially-challenged Millennials desperately searching for nostalgic reassurance in the form of a cartoon and its subsequent spin-offs designed primarily for children (again; me) may need to look elsewhere. For now you’re better off sticking with a replay of Hey Ice King! Why’d You Steal Our Garbage?!!