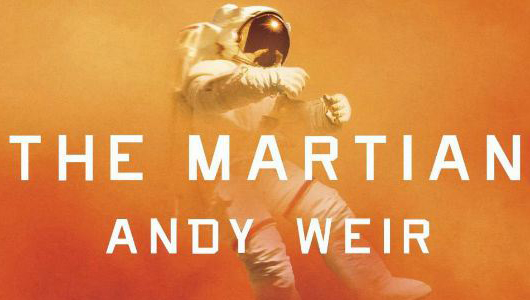 The first time I heard of The Martian, it was a throw away line: ‘Oh, look that movie about Mars that stole half of the cast from Interstellar is coming out soon!’ This was then followed by long discussions of the ‘Matt Damon plot twist’ from Interstellar, so ‘that new Mars movie that is coming soon’ went completely off my radar. Some substantial amount of time later, I was browsing my Goodreads thread (a social network for readers and writers) and came across the post from Wil Wheaton talking about the book that completely blew his mind and how much he would love to be the character from that book. The book was called The Martian, and it rang some bells – so I put it on my ‘to read’ list, but didn’t think much of it. I had such a backlog of books to read, including those with frisky unicorns, I didn’t have time for ‘serious’ (and probably tedious) sci-fi.

Remembering this makes me want to smack my past self on the head, then call her ‘an idiot’ – then smack her again just for good measure. The book is simply amazing. It made me laugh out loud (and scare a whole tube carriage with my hysterical laughter at 5 am), it made me think (and that is hard thing to do!), it educated me (ever harder!) and it made me genuinely worried, excited and sad for a fictional character. Whenever something bad happened to Mark Watney, I do not remember reading through the pages of any other book fast enough to find out if he would manage to figure out how to solve the problem and survive.

The Martian can be easily summarised with one sentence synopsis: ‘A man gets stranded on Mars.’ This very short and to-the-point description already tells you a lot about the book. He will probably try to survive and get back to Earth. There is probably not much help he can get from NASA. It takes a while to get from Earth to Mars, so he will probably run out of food, or water, or air, or all three. Something will probably go wrong. And – spoilers! – all of the above happens in the book.

However, what I am trying to highlight is that while the story has some really interesting plot twists, it is not completely original. In fact, Daniel Defoe has written something very similar back in 1719, only it was about a deserted island and a man called Robinson Crusoe. Many overarching story bits in The Martian are predictable, just through the use of common sense, so to me, it is how Mark manages to survive that is important. This ‘how’ is a very layered animal as it covers not only his problem solving skills and highlights that he is a clever man, but also covers his mental state and the ability to look for solutions even in apparently hopeless situations.

This is where the books excels and is also absolutely nothing like anything I have read before. While building a moat is something I can understand, the process of creating many litres of water from Hydrogen, on Mars, is beyond my comprehension powers. You could tell me the theory and show me diagrams and equations, and I won’t understand you. Yet, I understood Mark just fine. Somehow Andy Weir, author of The Martian, managed to explain science in such an approachable and understandable way that even people with zero disposition towards the sciences could follow. More than that, at no point in the book did I want to skip over ‘the sciency’ bits as they grabbed me as much as any character moments. If, for some reason, Andy Weir could not explain the science of The Martian – a lot of it is based on reality, but the book is still sci-fi – I think the whole book would fall flat. With so much space technology and the planet that is still a mystery in many ways, one just can’t get away with saying ‘and he built a moat’, especially if one is narrating from the point of view of NASA engineer, botanist and astronaut. Also Mark’s sense of humour avoided making the narration dry. I would love to meet that man in real life and have a chat with him. 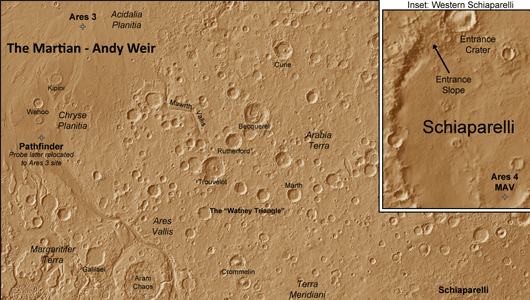 There aren’t many fictional characters that I liked as much as I liked Mark. Funny, sarcastic, extremely clever and, even despite everything that happened to him, an optimist, Mark is immediately likeable. From the very first chapter, the reader dives into Mark’s thoughts, as the book begins with first person narrative as Mark records his logs and explains what has happened. At first, I was worried that events would feel a little bit delayed due to this style of narration. Very rarely is the story told from the perspective of things happening to Mark, as most events have already happened by the time he is telling you about them and, surprise, he survived them! However, even so, I was still sitting on the edge of my seat while reading the book, wondering how Mark would solve his next problem and if he would be able to get back to Earth.

The only part of the book I didn’t like – and this me really nit picking here – is the switch of narration from first person to a third person. It doesn’t bother me when the book switches from Mark’s first person logs to the third person narration of scientists at NASA or other astronauts on space ship Hermes. I understand why this has been done, in terms of both characters and the flow of the story. However, once or twice, Mark’s story would shift from first person to a third person. While there is nothing necessary wrong with that, it felt slightly uncomfortable to me, maybe because I was so used to being in Mark’s ‘head’ rather than looking at him from outside.

The Martian is a kind of book, that after finishing, I immediately regret reading because I will never get to read it for the first time again. It is a very optimistic book as well, as it talks not only about survival, but also about innate instinct present in all of us to save those in danger and in need of help. You don’t need to be into Sci-Fi to enjoy the book. It is a great and touching story, even despite some fantastical science. You can even go watch The Martian movie and then read the book, enjoy it and still be surprised. If this was Andy Weir’s debut novel, than I can’t wait for other things he is going to write!