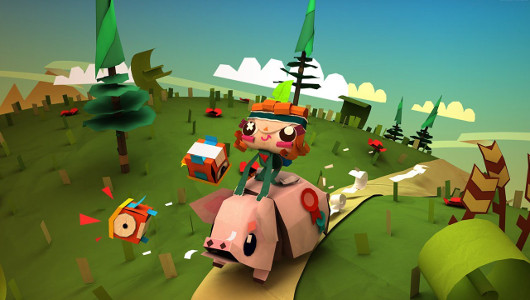 It goes without saying that many AAA game productions take themselves too seriously these days – focusing on bleak aesthetics with a colour palette consisting of various browns and greys. With the current generation of games consoles in full swing there are no better games to showcase graphical fidelity and prowess than ones that use the most vibrant colour palette available on top of a unique and charming art style. Tearaway Unfolded is a game that does just that.

A retelling of the story from the original Tearaway on the PlayStation Vita, Tearaway Unfolded puts you – the player – at the centre of the game world. After a catastrophic event tears a hole in the sky allowing evil scraps – tiny newspaper monsters – to invade the world you’re tasked with guiding a “messenger” on a journey to repair it. Along the way you’ll interact with various paper craft inhabitants of the world who will need your aid as well as animals such as squirrels, elk, gophers and crows.

The game world and the aesthetic of Tearaway Unfolded is gorgeous. Running at 1080p and 60FPS on the PlayStation 4, it puts pretty much every gritty, realistic game to shame. It’s vibrant, colourful and charming. 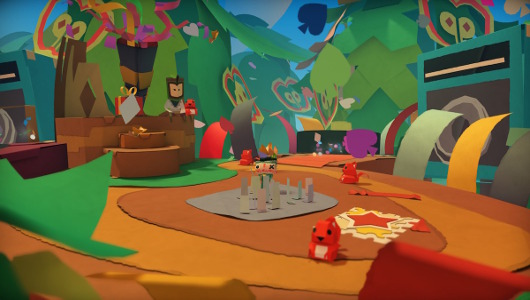 The gameplay is simple enough for anyone to understand and new mechanics are introduced at a decent pace so as not to overwhelm you. You’ll utilise things such as the gyro inside the Dualshock 4 controller to throw projectiles or using the touch pad to generate a gust of wind. You can even use the light on the controller to highlight objects in the game world such as plants in order to make them grow or use it to stun the enemy scraps and lure them to their doom. What starts out as basic platforming soon develops into a genuinely challenging experience as the game progresses and there are lots of little extras along the way for completionists too!

The game doesn’t punish you for failing at a particular puzzle, falling off the level or being taken out by scraps. It quickly resets you back to where you were and encourages you to give it another go. If you’re really stuck then the game will ask you if you need help in the form of a squirrel guide popping up in the lower right of the screen, which is a nice touch considering the game is targeting a younger audience. 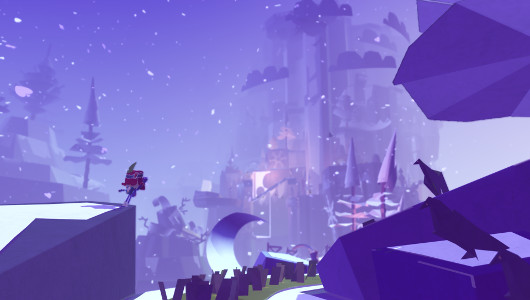 The scraps are the main enemies you’ll encounter in Tearaway Unfolded. The first ones you’ll encounter are easy to deal with, using your light to stun them – or using gusts of wind to blow them away later in the game. As you progress there will be new enemy types showing up such as a scrap on stilts that you need to roll into to stun and a scrap with a jump pad on his head that you’ll need to jump on in order to stun. When multiples of these enemies show up it becomes a real test of trying to juggle which ones to prioritise first. You’ll be using almost every ability you’ve learned up until that point and it ensures that none of the mechanics are there as a one off. They stick with you throughout your adventure.

Over the course of the game you’ll come across presents which can be opened by pressing the touch pad on the controller or by completing a task for someone in need of help. These tasks can range from taking a picture of an object, using the touch pad to draw something or even by rounding up gophers and putting them back inside their play pen. Presents award confetti – an in game currency – which can be used to purchase new items and features for your messenger.

The messenger is completely customisable. You can change their eyes, nose and mouth as well as adding other decorations to make them truly your own. The game also has functionality for the PlayStation Camera and the PlayStation Companion App to allow you to customise the world even further. It’s a nice option to have, but they’re not needed to enjoy the game. However, the game does try to push the PlayStation Companion App on you a couple of times throughout the game – one instance was when a squirrel came out of nowhere to explain how great the app was and that you should try it out. It wasn’t overly frustrating, but it was an unneeded interruption to the gameplay. 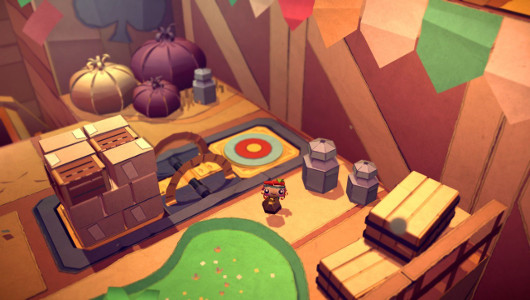 One of the biggest frustrations in Tearaway Unfolded however is the camera angles. There were multiple times when the camera wouldn’t line up correctly behind my messenger in order to see what I was doing. This was also the case when it came to using the gyro in the controller to aim and fire objects into the game world, sometimes the camera angle was off by such an extreme margin that firing at what I wanted to become an impossibility.

The controls can also prove to be slightly frustrating at points as well. One section involves you riding a pig down a linear path; however, if you decide to turn around because you missed something then the controls don’t invert which becomes incredibly confusing.

But these minor gripes don’t detract from the fact that Tearaway Unfolded is a great game. It’s the perfect game to play when you need to relax and chill out. It doesn’t want to be frustrating; it just wants to put you at the centre of the story within a beautiful paper craft world. The game will certainly cater to a younger demographic, but that doesn’t mean you can’t have a tonne of fun with it too.