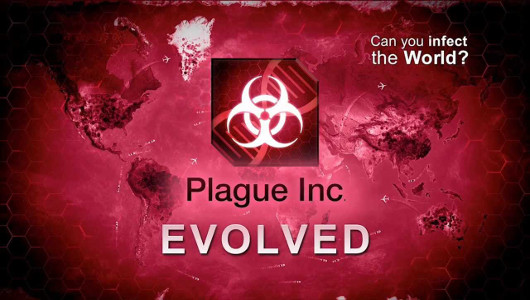 I remember sitting in computing classes many years ago playing a flash game called Pandemic whilst the teacher wasn’t looking – as were many others in the same class. It was a fun little game revolving around infecting the entire world with a disease. It was simple, yet it was fun at the same time. Plague Inc. Evolved – a redesigned port of the successful Plague Inc. on mobile platforms – is a game that takes that simple concept and adds layers of complexity to it to make for an undeniably challenging test of wits and cunning as you attempt to outplay humanity and bring them to their doom.

There are numerous pathogens for you to use in Plague Inc. Evolved. You unlock these by progressing and winning a game with each. For example; Bacteria is the starting pathogen and winning a game using it will unlock viruses for use and a win with a virus unlocks the fungus. Eventually you’ll be playing around with things such as bio weapons, nano-viruses and – definitely the most fun – the necroa virus (where you’ll create your own zombie apocalypse).

A game of Plague Inc. Evolved begins with you selecting a country to begin your disease. There can be a lot of strategy involved even at this stage as you’ll gain resistances to certain effects, but at the same time you may have trouble infecting other countries. There are numerous factors to take into account such as airports and harbours, the climate of the country, if the country is rich or poor – poorer countries will be less capable of dealing with disease – and if the country is an island. 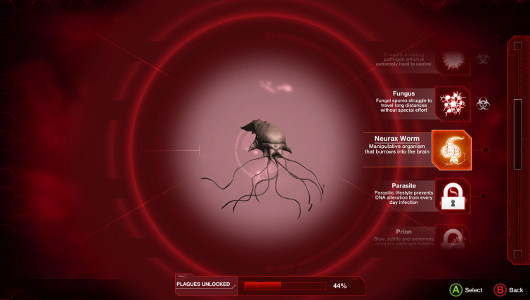 There are numerous pathogens to choose from, such as this cuddly fellow – the neurax worm.

Once you’ve selected a country you need to decide which approach to take. Do you put your disease out there and evolve it at an aggressive rate or do you play the waiting game and evolve resistances to drugs and work on building up transmission effects. Your disease can do things outside of your control too, such as mutate symptoms – vomiting, coughing and things to that effect – by themselves. You need to decide whether to devolve these random symptoms to remain incognito or run with it and run the risk of having your disease diagnosed early in the game. The longer you can remain hidden, the more likely your chances of victory.

Once your disease has been discovered the world will begin researching a cure. As your disease beings to run rampant and infect more people, the governments of the world will step up their efforts to eradicate you. If you played the waiting game and built up resistances to drugs whilst you were hidden then they’re going to have a hard time doing that. Balancing keeping the cure for your disease at bay whilst focusing on developing new symptoms (especially lethal ones) becomes and intricate timing game.

Symptoms, transmissions and abilities (such as resistances to drugs and certain weather) all cost DNA points. You gain DNA points periodically over the course of the game and you’ll gain more by infecting new countries, popping DNA bubbles on the map and generally just spreading your disease. Devolving certain symptoms also yields a refund of DNA points if you need them. 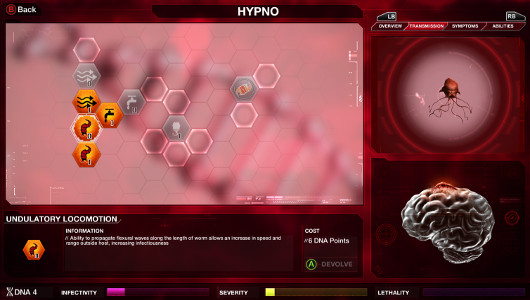 DNA points can be spent on transmission, symptoms and abilities to enhance your disease.

Each pathogen is distinctly different and each one require different strategies. Bacteria is the most basic pathogen which is easy to master, viruses can mutate very quickly and can quickly get out of control and funguses are hard to spread. Some pathogens also have unique gameplay modifiers to them such as the neurax worm – which can manipulate minds. The neurax worm is able to develop a trait that allows you to fly infected planes to uninfected countries. The necroa virus allows you to control zombie hordes – once the trait has been developed – and send them into other countries (and even across oceans).

Winning games also rewards you with bonuses that you can apply before games that can award you extra DNA points, bonuses to your disease in certain temperatures, increased chances to spread via various methods and many more. The game can also be played on 4 difficulty levels – casual, normal, brutal and mega brutal. Normal mode is the most realistic interpretation of how a disease might spread as the game treats 67% of the world’s population as regularly washing their hands and doctors only work a standard amount of days per week. Sick people will also be ignored.

On the other hand, the higher difficulties have 100% of people washing their hands, doctors working non-stop and sick people will be locked up in prison – which seems slightly extreme. Your strategies need to be honed to perfection in order to succeed. 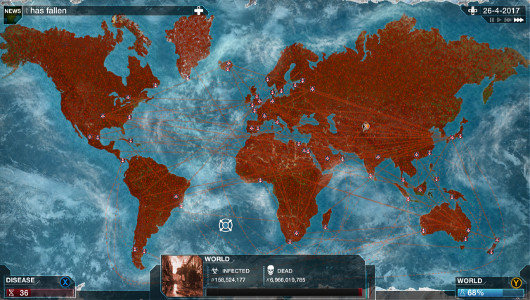 There are numerous strategies you can employ to bring down humanity.

Having traditionally been played with a keyboard/mouse combo or a touch screen on mobile devices I was initially apprehensive on how well Plague Inc. Evolved would transition to a controller given that there are a lot of things to click on the game screen – such as DNA bubbles which pop up periodically. However, the game has been implemented very well. Your in-game cursor automatically snaps to whichever in game bubble you’ve tilted the analog stick towards allowing you to pop multiple DNA bubbles in a few seconds without worry of them disappearing. Menus are brought up using the X and Y buttons on the Xbox One controller. It’s quick, responsive and looks great being played on a big screen too.

The only real gripe that I have with Plague Inc. Evolved is that once you’ve mastered a particular strategy for each pathogen the game begins to feel unrewarding and doesn’t feel like it’s providing very much of a challenge. It takes a while to get to that stage, but whilst it lasts the game is incredibly deep and rewarding once you’ve scratched the surface.

Overall, Plague Inc. Evolved is a mobile/PC port of a game to console that is done right. It runs very well with little to no technical hiccups. It’s a deep and rewarding experience if you want it to be, but can be as simple as you’d like if you’re looking to kill some time for a few minutes. But what is really impressive is the fact that the game provides a semi-realistic look at how a disease might spread in this day and age – it’s even attracted the attention of the CDA! Who knew destroying humanity could ever be this much fun?