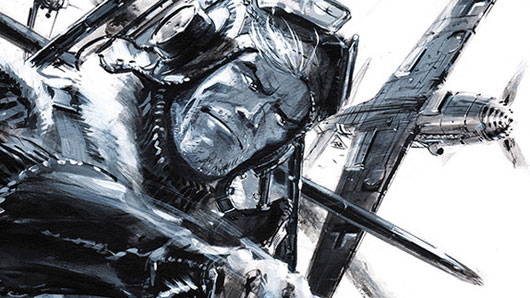 While I have read comics my whole life, this is the first time I have felt compelled to write about one. Johnny Red is a perfect storm of interest for me. Garth Ennis is no stranger to a war story comic, but is more widely known and respected in the comic world for his award winning writing of the Preacher series, which has recently been picked up by AMC to be turned into a TV series. However, Garth Ennis holds a particular prominent position in my comic fandom as he penned the stories, regarded by many others and I as the best ever from my favourite comic character, The Punisher. Ennis started writing The Punisher series under the Marvel Knight imprint and the original story of “Welcome Back, Frank” still ranks as one of my all-time favourite comic series.

I deliberately mention this Punisher run as it was the first time I encountered Garth Ennis writing about war, be it Frank Castle’s war on organised crime or the flashbacks to his tour of ‘Nam. It was the 2005 Marvel MAX spin-off miniseries, Punisher: Born, that highlighted how passionate Ennis was about detailing the horrors and psychologically scarring effects of war. I was never a fan of the much heralded, Preacher series, but knowing just how well Ennis can write a war story I was keen to hear that he was set to resurrect, a lesser known British comic book hero, Johnny Red.

It was also this resurrection itself that interested me. I never read much of the original publication he appeared in, Battle (Picture Weekly) – its heyday was a bit before my time and I remember reaching passed it to pick out the more colourful, and to a young child of the 80’s, much more interesting 2000AD – where Ennis himself made his name writing for the headline act of Judge Dredd for several years. However, Ennis was a big fan of Battle, so much so that he felt it unrealistically jarring when moving to the American spandex wearing superheroes. Ennis once referred to Captain America as “borderline offensive, because to me the reality of World War II was very human people, ordinary flesh-and-blood guys who slogged it out in miserable, flooded foxholes. So adding some fantasy superhero narrative, that has always annoyed me a little bit.”

There are two other minor reasons that this comic appealed to me, my wife is Russian and it has “Red” in the title. These were all reasons I made a point to pick up an early preview copy of the first issue at last weekend’s MCM Comic Con in London, but this first issue did more than enough to keep me interested. 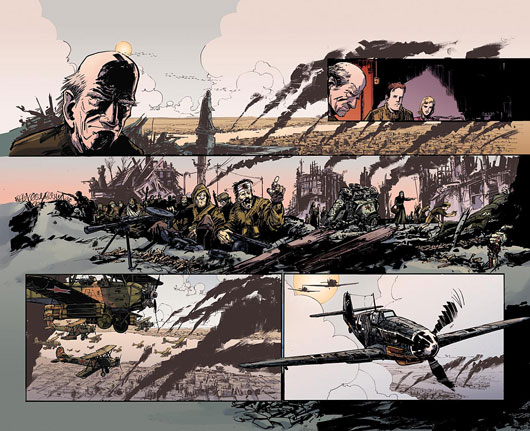 The story is told via the medium of a framed narrative. We are introduced to Tony Iverson, a wealthy benefactor who is setting out on the highly expensive restoration of a World War II Hurricane airplane. As part of the restoration process he also wants to research the history of the plane – particularly as it seems to tell an interesting tale of exactly how a British plane ended up fighting on the Soviet front lines. This aspect of the story has some truths to it too, as Britain sent over 2,900 Hurricanes to fight on the Eastern Front.

Tony Iverson manages to track down an old Russian War veteran, Rodimitz, who was the chief mechanic who worked on the plane that is being restored. Rodimitz begins his tale with details of the protracted battle for Stalingrad and how the titular character, British pilot, Johnny “Red” Redburn, ended up not just flying for Russian forces but commanding them. This is not as ridiculous as it may first sound as it is based on the true story of Arthur Burr from the RAF who was forced to land on a Russian airfield during the war.

The story of Johnny Red was originally conceived in an attempt to educate British children on the part played by Soviet forces in WWII. Battle wanted a Russian strip for exactly this purpose as the millions of deaths on the Eastern Front were not widely discussed during this time and are still arguably undervalued today. The Spitfire was the poster child of the Battle of Britain, but the workhorse like Hurricane is widely acknowledged as playing a larger part in RAF forces successfully keeping the Luftwaffe at bay. At no point does Ennis shy away from the truths of war and it is to his credit that even when writing an entirely fictional story he grounds it so well in historical accuracy. 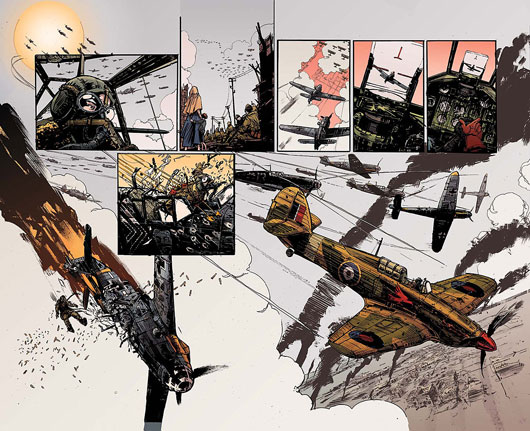 I would not go as far as to say that I dislike Keith Burns’ pencil work, but I certainly do not love it. The artstyle looks good in action scenes and particularly at its best in the first spread that shows the modern day image of the Hurricane plane in its broken state. However, I do not like the way he draws faces, they look too messy, inconsistent and overly angular to the point of being unattractive.  This is obviously complicated by colour being added to the modern strips but I think particularly noticeable when set against the very clear defined, detailed pencil lines of Joe Colquhon’s artwork – who was the artist who drew the originals.

One factor that I really liked about the presentation of the comic overall was the inclusion of double page spreads detailing the genesis of Johnny Red and the actual history of the Hurricane over the Eastern Front. I found this highly interesting, fits in well with the original intention of the comic to educate and gives the stories more weight and realism. I also liked it as it reminded me of the format of some comics that I read as a child, most notably the British reproductions of Transformers and The Punisher.

Overall this introductory story is not exactly action packed or thrilling but does enough to set an intriguing scene. The press release related to this series details the involvement of the NKVD, the Soviet secret police, seemingly taking exception to Johnny Red’s command and it seems as though this story thread will be the major overriding topic throughout the eight part mini-series. I for one will be spinning up my propellers, pulling my chocks away and piloting my way through the dangerous skies ahead.

I also came across this excellent interview with Garth Ennis discussing Johnny Red while researching my review.