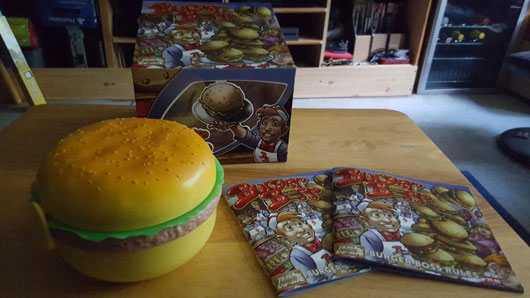 In my earlier years of part-time employment I started working on a hamburger stall outside Wembley, White Hart Lane and Highbury football grounds. I then progressed to working in Burger King and finished my fast food education working at TGI Fridays. It is safe to say I know a thing or two about selling burgers.

It is also worth pointing out that I also know a thing or two about Burger Boss and the people that made the game, Legend Express. I am mentioned in the thank you section of the instruction booklet. I point this out, not just to show off, but also just to make this entirely clear up front. I gave precious little feedback beyond “Well that sounds cool, have you thought about adding this?” when seeing the game in an early pre-production form at UK Games Expo earlier this year but I first met the Legend Express team when attending UKGE in 2014 when they were showing their previous game, Age of Soccer and they were grateful for the support that Big Red Barrel gave to this via Tabletop Tuesday. So, now that all this is clearly laid out there (not that there was much room to hide given that my name and BRB are both clearly mentioned!) it is time for you to decide whether I am still capable of an impartial review. I will save you the time – no, no I am not. I am quite clearly a burger fanboy.

Two factors made me struggle with this review overall. Firstly, I got one of the major mechanics (the way the queue system works) wrong, and since this was my main cause of complaint I felt I needed to replay using the correct mechanics a few more times before writing a review. Secondly came the morally debatable conspiracy theories that have plagued me in the weeks I have been playing; is it fair for me to mark a game down just to appear more credible? How easy is it to buy my support if a simple “thank you” can sway me? Did NASA really land on the Moon? And why do so many of the customers in the game look like clones? The truth may be out there but also right here – the answers we are all looking for are; ‘Not really but it may help’, ‘Pretty bloody easy’, ‘Yes’ and ‘Because it marginally kept costs down a bit’.

Overall though it does not seem that much was skimped on the presentation of Burger Boss. The art is of a high quality, visually impactful and also in keeping with the game and theme. The game’s outer box artwork and burger shell are probably the most eye-catching element. The burger shaped container in particular is something that everyone seems attracted to and I do not recall having ever seen packaging as thematically awesome. Aside from containing the game in a relatively small space it is also functionally useful when playing too. The lettuce and burger meat trays are perfectly suited for storing money and the burger component resources. I also like to use one half of the burger bun as a well designated discard pile. 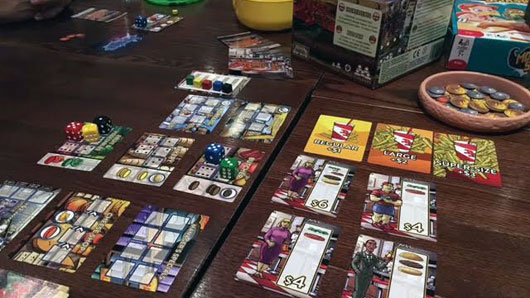 At the start of the game each player picks their burger restaurant chain and their associated colour. As it is the red team, “Burger Prince” is my general pick. The overall goal is to be the most successful burger restaurant, represented by the player with the most money at the end of the game. Money is earned by satisfying customer orders – and it is here that the theme is stretched thinly. Customers regularly order a “classic hamburger” (i.e. a plain hamburger consisting of just a burger patty and two buns) or another common item such as cheeseburger or a burger with the works (i.e. all possible components, which is a cheeseburger with lettuce and tomato.) Due to the way the Secret Missions work (more on those in a second) and also to give a variety to the customer orders, you end up with some odd orders being made. I have seen some very odd things in my fast food years, but I have never seen anyone walk in to a burger restaurant and order just lettuce and tomato – and if I did I would have been equally confused by seeing someone in the kitchen putting this order on the grill. It is easy enough to look past this concern but I have yet to play with anyone that did not point out that these two factors were a bit odd. I think this stands out just as the majority of the game fits so well within the theme.

The meat of the gameplay revolves around a worker placement mechanic that I really like. Workers are represented by coloured dice. Each player roles their die – two to start with but up to two more workers can be unlocked throughout the game. The die are rolled in secret from other players and then, in previous turn order, players declare the total number shown on the die they have rolled. The lowest total goes first in turn order. In the first few rounds all players are likely to have all their worker dice turning up to work, but in subsequent rounds players may want one or more of their worker dice not to show up for work. This would allow the player to have a lower overall total and therefore move further up the all-important turn order. 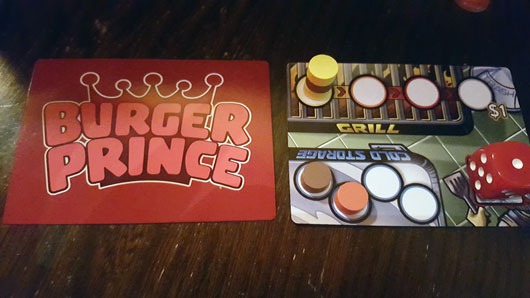 Players take it in turn to lay dice on cards in order to return resources – most commonly burger components but this can also return more workers, a “kitchen extension” or a “Manger’s Special” card – which generally helps you by giving you discounts, bonus components or the ability to steal an ingredient from an opponent’s Cold Storage area. Burger components cards have differing die values listed on them that return various levels of reward. For example, placing a one, two or three on the burger bun card will result in the player gaining two burger buns. Placing a four or five will return a single bun and there is no space on this card for a six. Your original kitchen has space to stored up to four ingredients – which means if you want to satisfy the more complicated orders you will either need to invest in a kitchen extension or start cooking some of the components while sourcing the others – as you can add more ingredients to items on the grill (but not take them away). Cheese is the one ingredient that works a bit differently with players only able to get a slice of cheese if they are able to lay down a higher value dice than any previously laid on the cheese card – which has led to the phrase “Cheeseblocking” being used as players lay sixes early on.

The turn order of players collecting ingredients can be important if players have rolled similar numbers but always becomes crucial when moving to the sales phase. The queuing system has new customers joining from one end and pushes out customers that have been waiting too long. Those that are waiting around get hungrier as they wait and their order rises from a regular meal to a large, then super-size meal – this results in a greater financial reward for the player. This is a nice risk/reward mechanic that generally works well although as all opponent’s burger components are on show, it can become a case of most often knowing exactly when you will get away with doing so or not. I have never seen a reason for anyone to invest in the second kitchen expansion and this makes this option less valuable compared with obtaining more workers (which costs the same.)

As I mentioned before, I initially played the queuing system wrong by not filling with new customers properly at the start of a new round – after the third round customers move to the front of the queue and the queues are filled with new customers – meaning that six customers are almost always available in the later rounds. 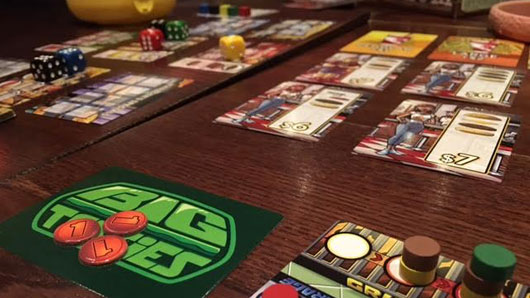 Secret Missions task you with satisfying certain conditions in order to gain bonus points at the end of the game. These are typically bonuses given out for selling pairs of items such as Classic Hamburgers, Cheeseburgers or items without cheese but can also reward you based on other factors, such as the gender of the customers served. It is nice to have a hidden element to the game that also gives more value to certain cards throughout. I would also recommend that with a three or four player game that players select more than one Secret Mission card (I would recommend with a five player game but there are not enough cards in the base deck) I would also suggest that for repeated playthroughs that two or three customers are removed prior to the start of the game – this speeds things up slightly and also means that there is a slight random element to customer requirements each time you play.

Excellent vibrant artwork that fits theme well.
Possibly the greatest thematically appropriate packaging of all time.
A good fun strategic worker placement game suitable for the whole family.
Can boil down to a series of purely financial motivated business-like decisions.
Lack of player interaction.
Theme is so strong that some gameplay elements stand out when they do not fit perfectly.

Overall the gameplay is strategic enough to maintain interest without setting the world on fire. The game is missing a small element of fun that is present in other similar games. I think this is due to a slight lack of player interaction and that gameplay largely boils down to purely economic based decision making that is a bit too much like actually doing work. This could however make it the most fun teaching aid for letting younger students learn the basics of supply and demand. I also feel that the five player version of the game is entirely functional but does result in the game taking too long both overall and in between turns, but this could be largely negated by playing with five experienced quick-thinking players. Also, I think that £35 is quite a lot for what is essentially a nicely designed card game, but the other components are of high quality and if you are happy paying a premium price for that awesome burger case then it is much easier to justify.

N.B: A very limited number of copies of Burger Boss went on sale via Amazon last week but the game is generally launching at Essen Spiel 2016 later this week.