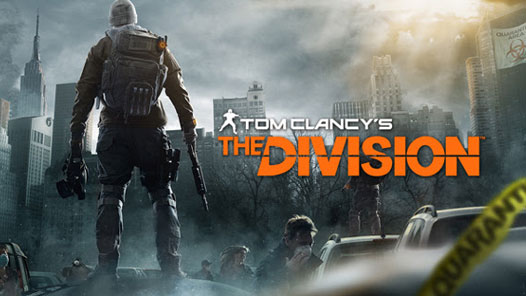 Ubisoft was at one time the king of the Open World that could do no wrong. Then came the crash. Assassin’s Creed Unity had its overly publicised disappearing face launch issues and Watch_Dogs fell a little flat compared to the vast amounts of next-gen hype that preceded its launch. With The Division being shown perhaps a little too early for its own good, it is making a rod for its own back that could result in similar impossible to live up to expectations that were the downfall of Watch_Dogs.

The Division is a very ambitious game and in a world of homogenised slightly stale AAA development, I am very keen to encourage Ubisoft to continue to take risks in developing new IP. Something that is echoed by the fans of their games helping to make both Assassin’s Creed and then Watch_Dogs the best selling new IP of all time. Also in evidence by the massive queues at gamescom and EGX all keen to see how well The Division is shaping up.

The setting of The Division is not the standard post-apocalyptic event that you see in the likes of Fallout – we join the story “Mid-Crisis”. The fall of humanity is actively ongoing and you play the part of those charged with staving off the execution of the species and pushing back. You play the part of a member of the “Strategic Homeland Division (SHD)”, or “The Division” charged by no less than the President himself to operate independently of any command structure and do whatever it takes to save the day. Not fighting against an alien force but a deadly disease and the disastrous repercussions of the breakdown of large scale logistics and man’s ability to adequately feed and supply the population. 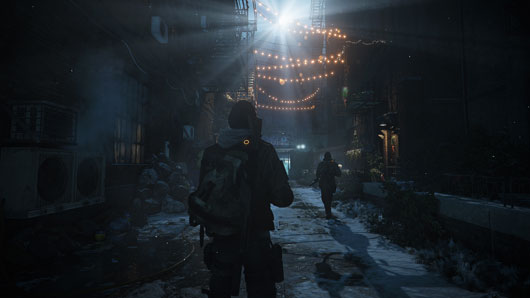 The portion of the game that was being demoed at EGX 2015 saw three man teams buddying up to venture into the “Dead Zone” – an area that is highly toxic where weapons and supplies can be found and used, once they have been successfully extracted and decontaminated.

The main problem obstructing your route out of successfully navigating your way through the Dead Zone are the other teams you may encounter on your way to the extraction point. Once killed and looted AI enemies drop weapons that then have a visual indicator that advertises to other players that you have potentially valuable loot. This can then be stolen by other human controlled players if they successfully kill you before you call in a helicopter to extract this equipment for you.

This is where it becomes a little muddy on where exactly this demo differs from the final game but from the portion played and information gathered it does seem as though this was a more structured version of what could easily descend into chaos in the final game. The Division is still being labelled as a third person MMO shooter with action roleplaying elements, but is difficult to know just how much freedom or structure will be given to player interaction. Turning on your own team seems like a given tactic (that was not in evidence in the demo) and I expect that any “team” in the final game is a fragile alliance that could easily be shattered in a hail of bullets. 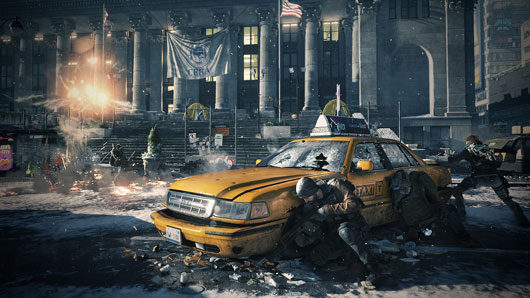 During our playthrough at the event I was teamed with my wife and a total stranger (despite what you may think, given her history in other games, I fully expected my wife to turn on me faster than the friendly stranger we were teamed up with!) We made fairly easy work of the AI opponents in the early stage of the level with a combination of me laying down cover fire with my light machine gun and turret, the stranger taking point and my wife backing us up with health grenades. Human controlled players are certainly class based with a limited set of equipment and abilities open to any one class.

When we reached the extraction point we faced two other teams of three human players. My suggestion of hanging back to let the two other teams damage each other seemed prudent but just ended up with us getting caught in the crossfire of both of them, with one of the other teams successfully setting off their flare to signal the chopper in the confusion. 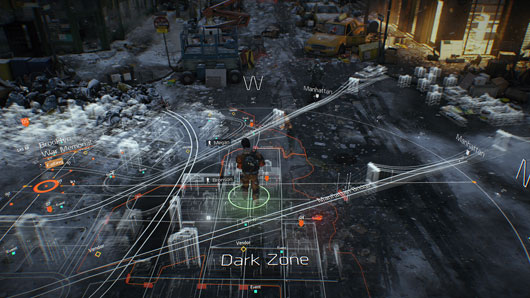 I am guessing from what was said that there will not be prearranged teams in final build and not sure how likely you are to encounter other teams or the likelihood of encountering multiple teams at once. I was a little disappointed to hear that an earlier announced feature which allowed you to join in as a drone via tablet has been dropped from the final game.

Graphically the game looked excellent, with a mid-crisis New York in great detail, but backgrounds did not seem quite as jaw-droppingly awesome as some of the initial reveal footage of the Snowdrop engine. Ubisoft were keen to stress that this is early pre-alpha code and there were a few graphical glitches and technical hiccups such as lag (which is odd given that I assume it was being played on a local server.) However, I fully expect these type of issues to be cleared up prior to launch and am very keen to see the full realisation that this demo hints at.