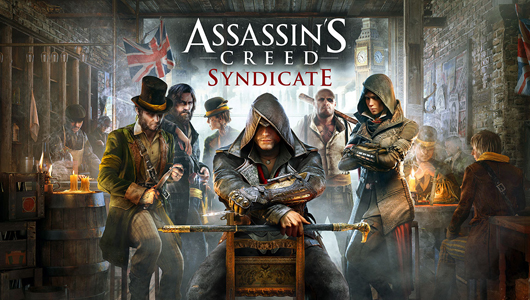 I have a very special place in my heart for Assassin’s Creed franchise. This is the game that got me back into gaming after my university hiatus, and I still jump from excitement upon seeing eagle nosed hoodies and stacks of hay. However, there is a certain fatigue with the franchise that even I am beginning to feel. As much as I loved pirating away in Black Flag, I felt like I needed to take a breather from the Assassin’s Creed universe at least for some time, unless something special pulls me back in. So last year, I had a break. This year, I find myself being pulled right back in with just two words – Victorian London.

Getting interested in the game just because of location might seem silly to some. Surely, I should care more about game-play, fighting mechanics, graphics, story line or characters before the scenery? And I do care about a lot of the aspects mentioned, yet the setting is the hook for me. I want to climb up Big Ben, roam around Tower of London and maybe ride a steam train. What is so different between climbing up Eiffel Tower and climbing up Big Ben (except, obviously, the scenery)? Not much, admittedly – but London has become my ‘home turf’ and I want to climb, sneak and assassinate in its digital, Victorian version. This ‘climbing, sneaking and assassinating’ might be very similar to those I have already done in Caribbean, Florence and other places, but it doesn’t matter. The heart wants what it wants!
– 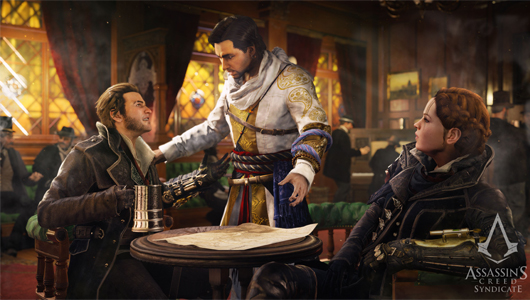 –
So after the initial location hook, everything else that was announced by Ubisoft was just adding cherries on top of the cake: Evie Frye as the second simultaneous protagonist, Jack the Ripper DLC (although predictable, but still exciting)… Going to EGX, my expectations for the game were quite high and after playing the demo, I have retained most of my excitement for the game.
–
One important point I would like to mention: I am glad I got to play the demo more than once. Assassin’s Creed games are not player friendly in the timed demo environment. There are just too many ways to go about solving things – stealthy or ‘gun blazing’, recruit help or do it by yourself, various entry points to the target, in fact, many-many different ways by which anything can be done. You can spend 10 minutes on one objective or you can spend 30 minutes. So when you have limited time in demo, you don’t get very far into it – so the first time I played I barely got past syncing the location. On my second go, on the calmer EGX day, when I was allowed to play the demo up to its completion, I had a much better experience and was able to get the feel for the game.
– 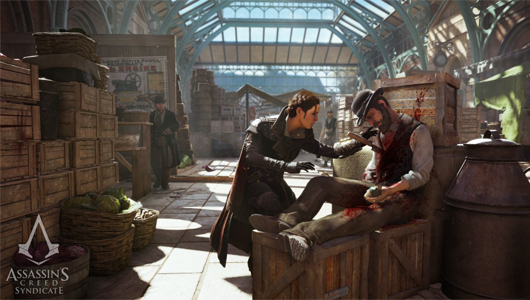 –
Playing as Evie Frye was great fun. I wanted to play as female assassin, since Ezio days, and I really like her design and appearance. It looks like Evie is more considerate and level headed out of the protagonist twins, and her abilities reflect that. Especially, the new ‘stealth option’, where Evie pulls her hood up and goes invisible if standing still. While my first impression was – ‘cool’, I later began to feel, like this ability was almost like cheating. It was now too easy to remain hidden from the guards. Even escapes became quite straightforward – all I had to do is get momentarily out of my pursuers’ line of sight and then put the hood on, job done! For the game that used to give so much attention to skilful stealth and finding different strategies to avoiding combat, this seems like a step back. I am not sure if this option was added for new Assassin’s Creed players, who, no familiar with mechanics of previous games, would already have a handful to learn, yet I wish something else was simplified instead. Finding a sneaky way to the target used to be one of my biggest points of pride in the game, and one of the ‘skills’ I was eager to improve on.
–
The line launcher, on the other hand, was a welcomed addition. It simplifies, or rather speeds up, getting to high places and feels very much like ‘batmaning’ in the Victorian London, which is not a bad thing. Getting to the tops of the roofs now is not just faster but also much more satisfying, and I can see the line launcher as an excellent device to escape chases.
– 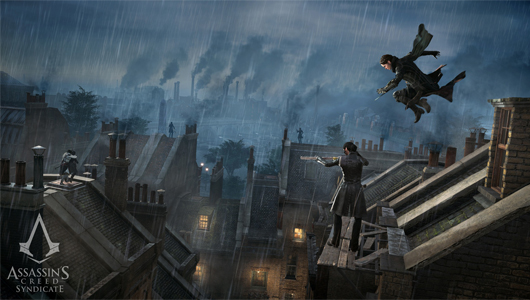 –
The demo, set in the Tower of London, for the most part displayed well various features of the game. I was able to save constable and avoid killing Royal Guards, and get to my target relatively quick and even received support through my new allies in the fight against the Templars. On the combat side of the demo, while it was obvious to me that some work on the system was done, for example it feels a little bit faster and there is a combo counter, but it still didn’t feel like a significant step forward, even from Blag Flag. Maybe in this case, the demo was not enough to get a feel for fighting, especially since I was encouraged to avoid fighting by an optional objective to kill less than 5 guards.
– 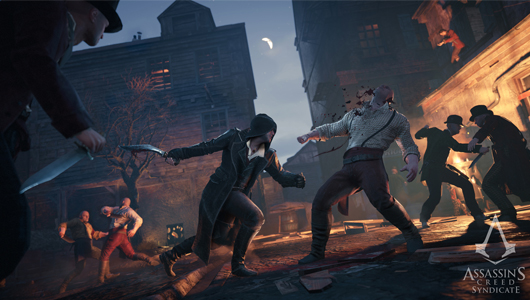 –
The reports of bug and other instabilities had reached me, even on the first day of EGX, some of them expected. After all, the demo is not a finished game. Many have raised some concerns that Syndicate might be going the way of Unity. My experience, however, was pretty smooth. The conversation button might not have been as responsive as I would have expected it to be and some conversations took several attempts to trigger. Other than that I was really encouraged by the games polish and overall presentation.
–
Overall, I left EGX encouraged and hopeful for Assassin’s Creed: Syndicate. The demo has kept my reignited interest in the series going, and even though I didn’t like everything about the demo, it still had more positive points than negative. I am excited to explore more of the Victorian London and looking forward to the game coming out, not long from now.
Official Game Site