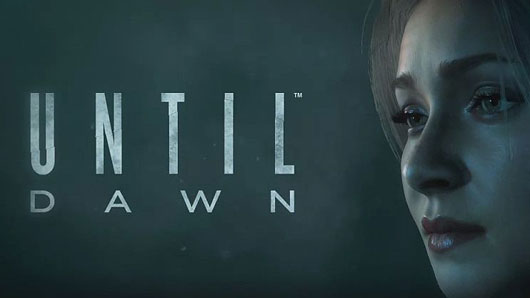 Until Dawn will undoubtedly be in contention for my Game of the Year 2015. I will add that I do not expect everyone to agree. Not everyone liked Heavy Rain, Fahrenheit (The Indigo Prophecy) or LA Noire, but these rank as some of my favourite games of previous generations. Until Dawn may not be an exact match for those Quantic Dreams of digital detectives but it is certainly cut from the same cloth. I should also note that I am not the biggest horror movie fan – that said, I quite liked Cabin in the Woods and loved the Scream series – and Until Dawn most closely reminds me of these movies. However, I definitely would not have been drawn to the game for the horror element – I have never been a particular fan of Resident Evil or the Silent Hill series of games – I do appreciate this slasher horror setting as an excellent way to impose tension while entertaining me with a well thought out mystery.

As it is such a integral part of the game, I am very conscious of avoiding spoilers for the story of Until Dawn and will refrain from doing so where ever I can. As it is obvious from the menu when you pick up your first clue, I do not feel it spoils anything to mention that there are three main mysteries uncovered throughout the story. One relates to the events of a year prior to the start of the main story and is called “The Twins”. The other relates to a “Mystery Man” and deals with possible sightings and identities of who this mysterious figure is and the final mystery is just named “1952” and deals with the history of the snowy mountain location.

There is a tale of Canadian/American Indian folklore weaved into one of these mysteries which ties in with the snowy mountain location – not so much “…in the Woods” as a “Cabin on a frozen freaky Mountain.” There is also a number of references to American Indian tribal beliefs and practises, the most overt of which is the pieces of Totem poles found throughout the environment. As you progress through the game, braving exploration of the environment will help uncover one of two things; a clue that fills in more of the picture of one of the three main mysteries or a portion of a Totem pole. I really like how the clues are presented throughout the game, with certain clues providing more evidence when seen in conjunction with another piece of evidence and some clues contradicting others – meaning that missing a clue may not be all that important, but missing one vital clue could easily lead you to the wrong conclusions. 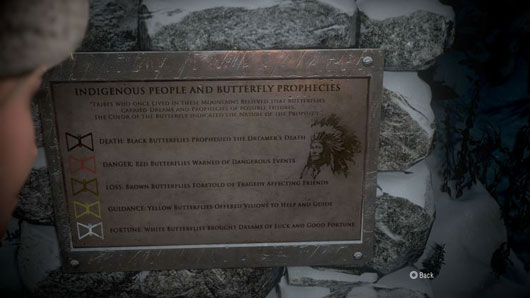 Totems help give you a glance of the future through one of five categories: Death (a warning of the potential death of a character), Loss (a warning of the potential loss of a friend), Danger (warning of a dangerous but not fatal event), Guidance (which looks to give help or advice) or Fortune (a premonition of good fortune.) All of these visions of the future can be mixed blessings, while most provide some useful information, they need to be correctly interrupted – this is easy in the case of Mike and the Wolf, not so easy in other cases. At times the foreshadowing knowledge can make you extra cautious to the detriment of the character/s you are trying to protect.

Generally, throughout the game doing the “right” thing, may be exactly what gets you into trouble. Early on the game does teach you that often the best choice is the choice to do nothing and sometimes both or all choices on offer will end in a bad result. A fairly rigid autosave system is in place throughout the game which prevents you from changing your mind and I often found myself regretting choosing one path over another or making the wrong moral decision when put under a time constraint. 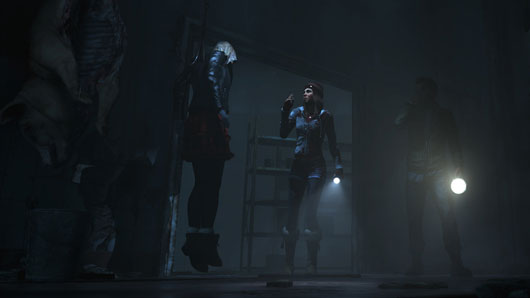 I understand that many people talk of their dislike of Real Time Events, but I have always maintained that used well they can be a very effective game mechanic. Until Dawn implements frequent use of RTE’s in a fairly intelligent way and makes good use of the speaker in the PS4 controller – to give you an audio indication of when you need to react with the appropriate button presses – which is appreciated when events can kick-off at any point and can literally make the difference between the life and death of your characters.

When first starting the game you get a choice of control methods, one that utilizes more motion controls and one that uses more buttons – I went for the latter option. Either way there are still moments in the game where you must hold the pad steady to avoid detection and this is done by ensuring that an on-screen representation of the blue light from the Dualshock pad does not move from the visible pre-defined space. 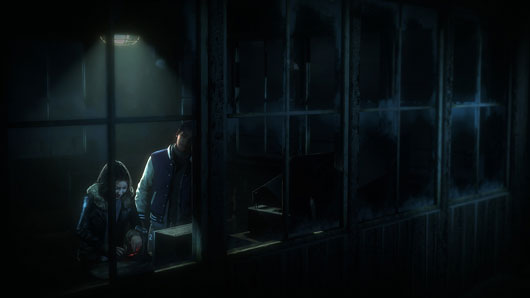 All of the eight friends that return to the Blackwood Pine lodge can live “until dawn” when a rescue helicopter is set to arrive, but all of them can also come to untimely ends by your hands. The eight friends and the few other characters do a great job of showing off the facial and animation capturing used in the development of Until Dawn – it really seems like am full realisation of performance capturing and you feel obliged to refer to the actors as digital actors rather than just the voice acting credits that many other games attribute to their stars. This is even more noticeable on the actors you could easily recognise from TV, Haden “Save the Cheerleader” Panettiere and Brett “That dude from Agents of Shield that isn’t Coulson” Dalton, being the most recognisable – and it is no surprise that these two are arguably two of the main stars of the game. On my first play-through I had four of that eight friends survive with one who I had expected to live, falling at literally the final hurdle – this seemed very much in keeping with the theme of the genre, in fact if everyone survived, it would feel thematically inappropriate.

I really enjoyed my time with Until Dawn. It is like a bloody, gory Scooby-Do episode with a few less dogs and a few more “psycho killers loose of this frozen, possibly haunted mountain.” While it has moments of humour (black and otherwise) it does not take itself too seriously. The characters may all act as though their lives depend on it (and they often do) but it is almost with a knowing wink to camera, like tropes are being identified and played with rather than presented and played out. I do not expect everyone to enjoy this as much as I did, but I also expect that with the timing of this release and some of the pre-press concerning the horror genre setting, the comparisons to Heavy Rain and even the discussion of controls and play style may make some people make the horrific mistake of letting this one pass by and missing out on one of the most interesting games of 2015. Now that all this evidence is in your hands, the decision is yours. Choose wisely.