I might have watched too many episodes of Dexter’s Laboratory because becoming a crazy (arguably) scientist was one of the top ten professions ‘for when I grow up’. So while other kids aspired to save animals, go to space or extinguish fires, I practiced my mad laugh. However, the serious part of my mad scientist phase did not last very long. I quickly discovered that chemistry was not my friend and the only part of biology that interested me was swimming with dolphins. The non-serious part of the mad scientist phase is still very much alive today, and I tend to day dream about inventing teleporters, automatic back ticklers and teleporting slap machines. You know, things you really need in life. Luckily for everyone else, before I was able to try out some mad experimenting in real life, I discovered video games and board games to occupy myself with. Recently, I also came across Nefarious: The Mad Scientist Game which perfectly satisfies my scientific aspirations. Rejoice World, you are safe.

You might have heard about Nefarious before, or at least have heard of its designer Donal X. Vaccarino. He designed many popular and outstanding games such as Dominion and Kingdom Builder. In fact the incarnation of Nefarious that I got to play was not the first, as the original game was made back in 1999. Recently, the game has been re-skinned with a simpler, modern and more appealing, at least to me,  artwork.

Nefarious is a relatively quick board game that can be played with up to 6 people, where each player takes on the role of an inventor, who creates such life’s essential items such as a freeze ray, robotic pet or a space elevator. Inventing, obviously, costs money but also gives you life achievement points, or simply victory points. The first person to reach 20 victory points or over by the end of the round, wins the game. If more than one person gets over 20 points by the end of the round, the person with the most points wins. If there is a tie, then players play additional rounds, until one of them has the most points.

Inventing, however, is only one of the available actions. Players can also spy on what other scientists are doing, conduct research for better, bigger things to be invented and they can also work to quickly earn that much needed cash to fund inventing. Any of the four actions can be performed each turn as cards are revealed simultaneously but resolved in a specific order of initiative. In essence, the above summarises most of the rules of the game, which are quite easy to understand and fast to get into. 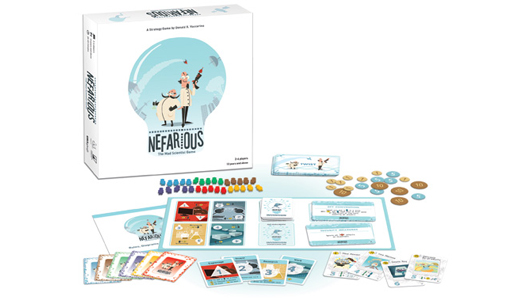 The only slightly confusing part of the game is allocation money based on the placement of spies. Having explained the game several times to people that have never played it before, I have seen quite a few struggling to understand how many coins they will be getting in return for their spies. I was also struggling during my very first game. The allocation of spies is quite important and could contribute greatly to winning or losing the game. While all other mechanics, including bonus effects of the inventions, become clear within one or two rounds of the game, the espionage mechanic takes longer to sink in. I could blame this on my bad explanation skills, but several people who played the game for the first time without my ‘help’ have struggled with this also.

In fact, the espionage mechanic is probably the only real fault that I can see in the game. Even after successfully mastering the rules of the espionage, calculating money based on the number of spies in the certain area is still the most daunting part of the game. This is not very obvious when played with a smaller group, for example, 3 people, as there are less spies on the board overall at any given time. However, when played with the full team of 6, what is supposed to be a quick game is staggered by this strange accounting phase. 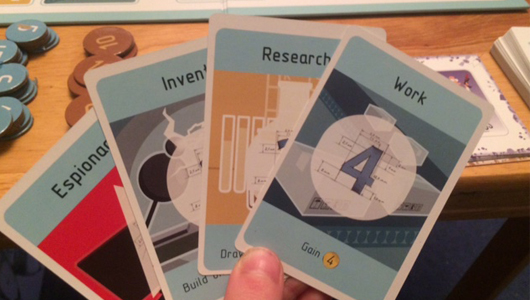 Otherwise, I have enjoyed the game a lot. It is filled with the wonderful humour of its art and cards. Only after several playthroughs, I have noticed that the effects of the cards actually correspond to things that you are inventing! For example, when creating the cloning machine, the player gets an extra spy as a bonus. So even if  the invention might appear random and just playing up the mad scientist theme, a lot of them make complete sense!

There is also quite a lot of space for strategy in Nefarious. While the aspiration is to get more money to purchase invention cards, there are several different ways of doing so. One could play a long game and use their spies, strategically placed on the board, to earn them steady inflow of cash each turn. The other option is play ‘work’ action to collect coins quicker, and thus those players tend to start playing invention card earlier in the game. Invention cards themselves have a variety of effects that could be used for player’s own benefit or to mess other players up instead. Finally, there is an additional mechanic that makes every game played different – twists.

Each game, two twists are selected at random from the deck of 30 available cards. These are additional rules for that playthrough. Some of the twists could be quite helpful – giving you more money each turn or allowing to pick up more invention cards. While other cards could be outright horrible and mean! For example ‘Alien Contact’ that requires that every player discards all inventions in their hand and pick up new ones every time they invent something. This makes it really tricky to plan ahead as your card hand gets refreshed every time you score points. Also sometimes the choice is outright impossible. If I invent Slime Ray, I will have to discard Machine that Blots out the Sun with an awesome bonus power. But I really want to invent Slime Ray. Machine that Blots out the Sun or Slime Ray? Choosing is hard, OK?! 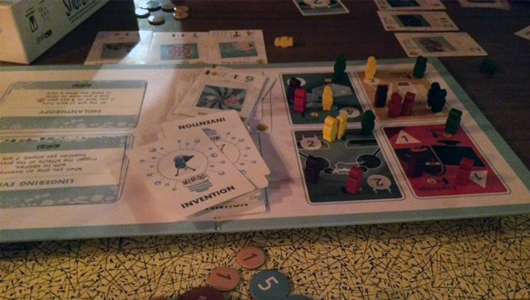 Other than this particularly cruel twist, I really enjoyed this mechanic in the game. You can still play Nefarious without any twists and have fun, however they add a certain spice to the game, sometimes making it easier to get things done and sometimes harder. Twists make sure that every time you play, you have to tweak your strategy a little bit to adjust to the new rules.

The invention cards are probably the most important cards in the game. Not only they are the source of the victory points but some of them have bonus actions. The balancing of the power to cost to victory points is also quite fair. Occasionally on picking up a card I caught myself thinking ‘those effects are just mean to me, how is this a bonus power?’ Then I notice that it has a fair few victory points and is also cheap. You loose some and you gain some. I just had to re-assess the game and figure out if the move was worth it.

If I was to nit-pick on the powers, I would probably say that powers that designed to impede your opponents are not significant enough. I am, however, biased towards ‘mess other people up’ kind of play style. Most of the negative effects in the game result in players discarding invention cards from their hand, or losing money, or, the worst, removing spies from the board. If one of the opponents is about to win, these powers are not enough to prevent them or even delay them. Once you see that someone is on the final stretch of the inventing race, they will probably win. Having said that, this was not really an issue as in every single game I played, at least 2 or 3 players were so close to each other in victory points, that even though you knew that one of them was going to win (and probably, not yourself), it was worth playing to the end to see which one. 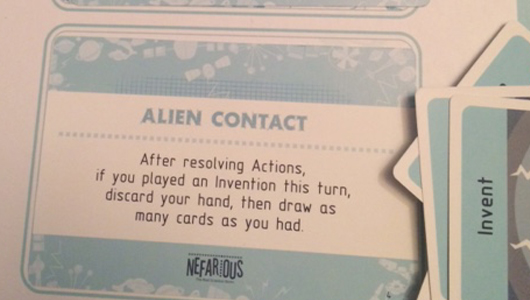 I have already made a passing mention of how differently the games feels depending on the number of players. The differences are not only confined to the amount of head maths you have to do, but also affect the time it takes to play the Nefarious and overall pacing of the game. My first suggestion would be to play it with at least three people. While a two player game is completely possible, I do not think the whole potential of Nefarious will be obvious. You want to have a fair few spies on the board. You want to be able to have more of the competition and see how the same card bonus action affects players depending on their strategies. It is simply more fun with more than two players. Three players are absolutely perfect for learning the game, while four to five players would be a great game for a more experienced group. With six people all the problems you have when playing a two player game inverse themselves – too many spies on the board, rounds take longer and players tend to loose interest.

Great funny artwork
Fast to play
Great ‘twists’ mechanic
‘Espionage’ mechanic is a little bit confusing
If the player is winning, there are little options to stop or impede them winning the game

If you ever wanted to see what it would be like to be a mad scientist for half an hour – then Nefarious is for you. If you want to play something simple and fun – Nefarious is also for you. Simple rules, with an exception of espionage mechanic that takes a little bit to get used to, fun gameplay and an awesome artwork to cheer you up. Also Nefarious has quite a bit of replayability due to the ‘twists ‘mechanic.   While you are pondering this, I will go and finish inventing my Buttered Cat Array. It always falls on the cat side.