If you know us here at Big Red Barrel, then you know that we like board games and video games alike. So when we were invited to preview the digital board game Gremlins, Inc, we were happy to attend. Originally the game was intended as a board game. As the developer Charlie Oscar realised that it’ll be too complicated, they decided to move on from tabletop to computer monitors.

In the game you play one of twelve different Gremlins, immortal, steampunk-y figures, living in Clockword Town. The game ends either after one player gets a number of victory points or who has the most points after a time limit. The conditions are decided by the players. If you have a 30-minute lunch break, then you can set a time and see who gets more points in this time-frame.

Every gremlin has different abilities, for the player to use. The mechanics work like a board game, you have a hand of cards, you use to move around and use abilities. Every card has a certain number of movement points, the more powerful its ability, the farther you can move on the board. In your hand you always have six different cards. Most of them will be ordinary action cards that just do a thing, but some of them are criminal cards. They are a bit more powerful, but can send you to jail if you are caught with one. When moving around the board it’s vital to keep the arrow on the board in mind, they dictate which way the player can move. 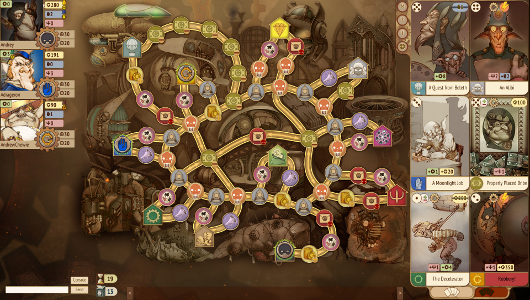 When looking at the UI, you’ll see five number next to each character portrait. It shows your money, your votes, your malice, your income and bribes. Your money is used to play more powerful cards, insurances and it’s generally good to have. Votes come into play every 20 turns, that when the elections for governor are. The player who is governor has some perks, he doesn’t have to pay bribes and the police won’t bother him. Malice is generally gained by mischievous actions, like sending others to jail or bribing someone. Some cards will punish the player with the highest malice and the player with the least of it will get extra votes in the election. Your income is earned every time you pass an income tile, if you land on it you’ll get double. The bribes work similarly, when you pass you pay normally, when you land on the tile you’ll pay doubly.

In order to play most cards you have to move to one of eleven locations. Rach of these allow the player an action by itself and to play a corresponding card from his or her hand. Apart from these locations there are a seven other types of tile the player can land on. On most of these tiles you aren’t able to play a card. When talking about the cards, of which there are about 150 different ones, we have to talk about the art design of the whole game. It’s stunning! Every cards looks amazing. The booth the game was previewed in was covered in artwork. I had to keep myself from staring at all of the different designs. I have high hopes for Gremlins, Inc. Although it is difficult getting into and getting your head around all of the different tiles and what they do, the game is still fun. When I played it during gamescom, I didn’t quite know how to play the game, but I still enjoyed it. Mainly because of “Schadenfreude”, the joy you get because of the misfortune of others. When you send your opponent to jail or make him pay you an obscene amount of money. In these interactions lies the fun of the game.