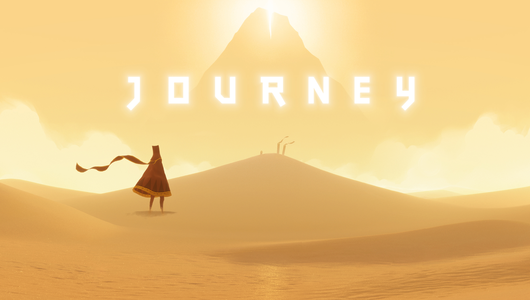 We Are The Game – How Journey Defines Us All

March 13th 2012: My 23rd birthday was just around the corner yet I had not even given it a second thought. In fact, I had not given anything much thought to anything at all. My life had somehow spiraled into a series of failures and disappointment; being dismissed from university, long-term relationship crumbling, family being more distant than ever – it felt as though every important part of my life had been destroyed beyond any kind of repair. I stared at the familiar four walls of my flat, convinced that those walls felt more than the numb state I was in. Trying to avoid a state of over-thinking, I switched on my PS3 and logged into the PlayStation Store as I always did around midnight, in an almost robot-like fashion. What to play, what to play I muttered, scrolling through the endless lists of games. Yawning slightly and preparing to throw in the proverbial towel, I paused on a bright yellow and burgundy red icon which I was immediately drawn to.

I had already heard about Journey being the fastest-selling PSN download in history, but it was one of those facts that flew over your head a little. A few games had recently been rated 4/5 stars from certain websites, the reality of which was a rushed product full of technical errors, recycled environments and little to none originality in storyline. In all honesty, even video games were slowly losing their effect on me.

I stared at the tiny thumbnail with both skepticism and intrigue. A tiny red cloaked figure, standing in front of a mountain in a barren desert; what could possibly be so great about that? I raised my eyebrow. Plus, the graphics look extremely simple; it’s hardly the FOX Engine now, is it? I had already played thatgamecompany’s Flower, which was nice and relaxing. I appreciated it’s therapeutic traits but, sadly it had not left much of a resounding impression on me. I shrugged noting the price – well, it’s only 10 quid. Haven’t got much to lose really, have I? At best, it would be another relaxing game to turn to if another hair-tearingly stressful day occurred. Hardly a problem. I assured myself and began to proceed with the extremely quick download which triggered yet another sceptical and worrying thought – it was going to be a short game. Nonetheless, I loaded it up, sat back with my cup of tea (typical gamer routine) and mentally willed the game to impress and inspire me, something which I had not felt in a very long time. Needless to say, that cup of tea remained full to brim and ice-cold by the end of the game.

What I soon heard sent the biggest chill down my spine and enveloped my skin in a flurry of goosebumps. Sorrowful strings which seemed both comforting and regretful all at once. If nostalgia had a sound, I feel as though Journey encapsulated it to a tee. I found myself hovering on the menu transfixed to this beautiful piece of music which had somehow hit me hard immediately. Snapping out of this musical awe-struck state, I proceeded to begin the game, hoping that that song was simply not a ‘one-off’ good piece.

And so, I began my journey; my red cloaked figure in the desolated deserts with what looked like strange gravestones scattered across this hazy, sandy landscape. What the hell is this thing? I thought I had seen it all in the video game world with Moogles and Metal Gears but this looked like some kind of ornate ninja/monk hybrid. Confused and awaiting some kind of tutorial, I cautiously proceeded towards the mountain which omitted an ethereal light. Like a moth to the flame, so to speak, I began to venture towards it, feeling like Bilbo Baggins heading towards the Misty Mountains (minus Smaug – hopefully). Interestingly, I soon discovered I could only really do two things – chirp musically like a bird and jump in the air, my scarf swirling in the air. Upon chirping, my red cloak character began to omit glowing rune-like symbols. With a mixture of alarm and curiosity, I ventured on through this barren desert all alone, with only the wind sweeping across my back for company… 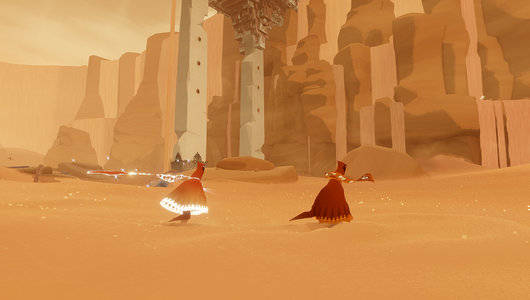 But suddenly, I heard a distant noise. It sounded like some sort of metallic reverb mixed with melodic chimes. Alarmed, my eyes darted around the landscape, noticing a red, blurred colour gliding towards me at an extremely quick rate. Oh my God, it’s not a boss already, is it? I’ve only just started this game! I focused more intently and, to my amusement, I discovered it was another red cloak. Ah, so this must be part of the game then, some kind of A.I perhaps? I started wondering around, assuming this A.I would follow me but it did not. Instead, it went off on a chirping frenzy, jumping and floating around. Could that actually be… a real person? My mind was buzzing with a new-found feeling of hope and I peered at this stranger questionably. I chirped. They chirped back. I chirped twice. They did the same. In my excitement, I began hitting the chirp button and floating to which they responded. Before I knew it, we were both floating in mid-air, our scarves entangled in a beautiful glow amidst this conversational melody. It was a REAL person! A mixture of elation, relief and wonder took over. We scurried through the desert on our way, chirping and gliding our way through the most stunning and gorgeous environments.

When I found that my companion was struggling, I found myself racing back in sheer panic to try and rescue them. Where possible, I remained close by my companion’s side. I had developed this bond and attachment to a complete stranger so quickly, to the point where I was genuinely concerned I would lose them. My journey had become ‘our’ journey and I wanted to see it through until the very end.

I speak of Journey with such reverence to everyone that it’s almost like a legendary tale of yore, one passed down by word of mouth through the ages. People constantly ask me why the game is so special, important and why it created such an impact on my life. Three years on and I still struggle to find the words to explain why. It is true that I discovered Journey at the most difficult point of my life. My future was hanging on a thread and I was beginning to lose the will to merely exist in my own mind, let alone with anyone else. Playing Journey allowed me to reassess my existence. It gave me a space to step back and view things visually, escaping the negative noise of my mind. It allowed me to finally face many fears I had swept under the carpet, giving me that little light of hope I so desperately needed to continue on and finally push forward into progress, just like the red cloaked figures in the game itself.

I would even go as far as to say that Journey has been my own form of therapy, Austin Wintory’s incredible and Grammy-nominated score, in particular, serving as a means of reassurance, comfort yet urgency to simply continue through life on this journey. 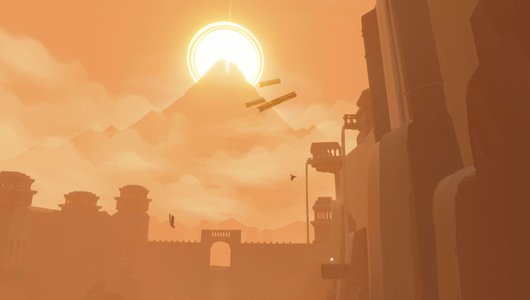 I can honestly say that no other game has really quite moved me in the same way Journey has. Yes, there are games that have left my mind in ruins with its plot-twists, or in floods of tears over a character’s death but none had truly crossed that line between momentary feelings, into actually having a long-term impact on how you behave in reality. We, as gamers, are aware that we are a separate entity from our technology. A physical being, regardless of how much we can relate to our beloved pixelated characters. But what happens when a game represents your life? When the lines between virtual and reality begin to blur and your character IS you?

This is what is so fundamentally important about Journey amongst all other games within the industry; it is a projection of life through an art form, one which is absolutely open to interpretation but a journey which we, every single living being on this planet right now, are destined to live. It visually enables us to view life in the most simplest yet incredibly powerful way. Journey is the voice of reassurance yet reason; it’s not going to be easy but we’re going to get through this together because we have to. It will be downright horrible at some parts and you will feel so desperately alone and ready to give up, but my goodness is it worth it for those wonderfully beautiful moments that take your breath away. Find your means of coping, whether that be chirping with a companion, surfing on the golden sands or revelling in the sweet melodies of a song – you can do this. 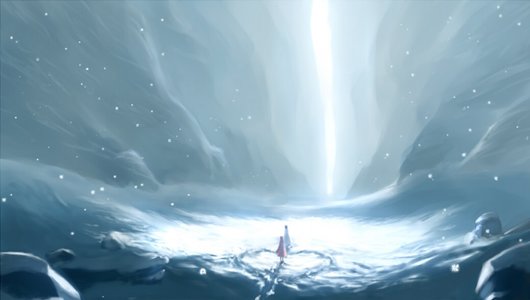 Journey is not a game – Journey is an experience.  In some ways, I would say that WE are Journey. That motivating, positive and encouraging voice in our minds which we try to acknowledge, more often than the negative one. Journey will reveal things about yourself that you probably did not know, and may even change the way you view or live your life. Journey is proof that video games can actually provide that vital connection between a person’s mental well-being and progression in an innovative, thoughtful and utterly beautiful way.

Journey for PS4 is out now on the PlayStation Store and free for players who downloaded it on PS3. Played Journey already or thinking of giving it a try? Share your comments  Download it here through this link.