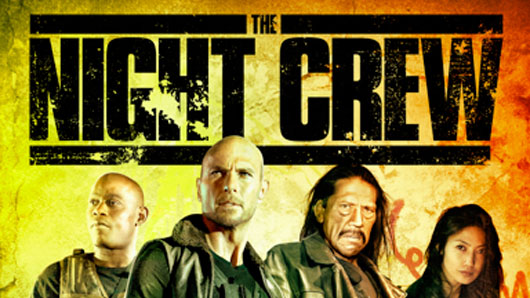 The Night Crew is a strange film. Not strange in the sense that it follows a complex labyrinthine plot shaped by the mad whims of an auteur director, nor that it pushes the boundaries of modern cinema with its biting wit and in depth and honest discussion of what it means to truly be human. Mostly it is strange because it seems to be several other films, clumsy edited together at both the pre and post-production stages.

It is a film that can not decide whether it wants to be an action blockbuster, a gritty thriller or a horror film, and as a result does not do any of those things particularly well. On the other hand, it has Danny Trejo in it.

The plot of The Night Crew is pretty barebones. A gang of down on their luck bounty hunters, led by Luke Goss and Bokeem Woodbine as Wade and Crenshaw, decide to pick up a contract south of the Mexican border. The target of their attentions is Mae, a mysterious young woman who is also being hunted by the head of a Mexican cartel (Danny Trejo), for mysterious reasons. Once they pick up their quarry, the find themselves fighting to make it back to America, while pursued by the enforcers. Simple straightforward bit of story that neatly established setting, tone and characters. Except it does not do so.

From the moment they roll up wearing balaclavas and brandishing automatic weapons, the bounty hunters are given pretty much no identifiable character traits. Even once they remove the masks they still fit the all the genre’s clichéd roles. It is over a third of the way into the film before we are given any indication of the characters’ character.

After a strangely slow start, that I assume is supposed to create tension in the course of building up to the first big gun fight, the major players all find themselves at an abandoned hotel staffed by a sole security guard (Jason Mewes). Given Mewes previous career, one might reasonably assume that he was supposed to be the comic relief of the piece, but if there are any jokes to be found then they whizzed right over my head. 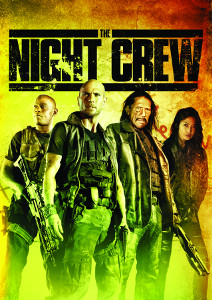 The film’s main flaw is its inconsistency. Whole subgenres are introduced, changed and then promptly forgotten until a whole act later when they are brought back to the foreground in such a way that makes you wonder if you have fallen asleep and missed something. The Night Crew can not decide whether it wants to be Bad Boys II, Dusk ‘til Dawn or The Thing, and consequently fails to be anything like any of them. Perhaps the most perfect example of the identity crisis at the heart of the movie is Chasty Ballesteros’ performance as Mae. Arguably the protagonist of the movie, Mae’s character is constantly shifting in the worst way.  She goes from wide eyed innocence, to sultry vixen and round to vicious killer in the space of a scene, with no clear connection between any of it.  She deserves credit for bringing range to such a two dimensional character, but she could have been part of three entirely separate movies for all the sense it makes in context.

That is not to say the film is entirely without merit. A few of the lines of dialogue manage to hit the macho tough guy sweet spot, well aimed F-bombs and shouting that straddles the line between man-angst and heartfelt emotion. While most of the character interaction is so-so, there’s a face off between Woodbine and Goss that could easily go down in the bro-mance hall of fame. And Ballesteros does manage to be rather effective in an ‘eye of the storm’ moment in the midst of a gun battle that feels like it came from another film entirely.

And of course there is Danny Trejo, who manages to inject some much needed charisma into his scenes. It’s a pity there are so few of them really, as watching him chew the scenery and look threatening is probably the high point of the movie.

Ultimately The Night Crew tries to do more with its basic building blocks than is necessary, and in doing so is ultimately the worse for it. It could have been a much more effective experience with just a few tweaks and some unnecessary details removed, as it stands it’s just a confusing mess held together by excessive expletives and lacklustre violence.

Content Media provided a review copy of The Night Crew