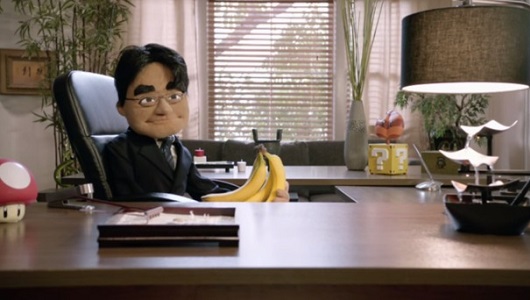 Once again Nintendo opted for a Digital Event over live conference in order to show off what they have planned. Kicking off in what is becoming their trademark quirky style, with Reggie Fils-Amié, Satoru Iwata and Shigeru Miyamoto took on a puppet form to open the presentation (“my puppet body is ready” – that joke isn’t going anywhere anytime soon).

This became a segue into a new Star Fox title, Star Fox Zero. Looking similar to older titles such as Star Fox 64, the footage featured aero-combat with the Wii U GamePad functioning as a gyroscopic cockpit view. The Developer Story enabled Miyamoto to discuss his inspirations for the series, from Thunderbirds to Shinto mythology, and show off some new features – most notably a transforming Arwing. The game didn’t look great, but seeing Miyamoto discuss it with such passion was a treat.

Fils-Amié then delivered a short speech on the significance of ‘transformation’ in this Nintendo Direct. He briefly mentioned the NX, but really only to clarify that it wouldn’t be a topic till next year, and that was the last we would hear of it. Truthfully, apart from a few titles with a rejigged format, you’d be hard pressed to figure out how the theme of transformation was entirely relevant.

In a surprising move it was then revealed that two Nintendo characters, ‘Turbo-Charged’ Donkey Kong and ‘Hammer Slam’ Bowser would be joining the next Skylanders title, Skylanders Superchargers with the new figures doubling as Amiibo. Depending on the success we can probably expect this partnership to develop further.

Two new Zelda related titles for the 3DS were the next announcements. First was a port from the Wii U of Hyrule Warriors featuring added Wind Waker content. After that an entirely new title, Triforce Heroes was introduced. It features co-op multiplayer dungeon-crawling similar to Four Swords (but with only 3 swords as of yet). Sadly, while it was made clear earlier this year that Zelda Wii U would not be making an appearance at E3 2015, the total absence was still a disappointment.

Following the 3DS co-op trend, Metroid Prime: Federation was then revealed for 2016. It’s been a long time since a Metroid title appeared at E3. However this probably wasn’t the next entry into the canon that fans were hoping for. While it is set in the Metroid Prime universe, that’s where the similarities end, as the main focus seems to be an out-of-tone multiplayer mode, no single player mode has yet been mentioned and neither has Samus herself.

It was then announced that Fire Emblem: Fates for 3DS and Shin Megami Tensei x Fire Emblem for the Wii U would be getting a Western release at some point in 2016 and Xenoblade Chronicles X will be released in December. But the trailers came and went with little exposition, not likely to create any converts (myself included).

Next up was Yoshi’s Woolly World (and some very cute plushie Amiibo). With that came plenty of gameplay footage, the introduction of yarn Poochie and some discussion of the Amiibo compatibility and their Yoshi skins counterpart. While the game looks great, if this was meant to be a highlight, considering it was first announced in 2013, it was hardly enough to get excited about.

Then it was time for an onslaught of Mario titles. Firstly a Mario & Luigi/Paper Mario mash-up for 3DS – Mario & Luigi: Paper Jam. Though we won’t be able to get our hands on it till early 2016 and it would have been nice to get something similar for the Wii U. Then came Mario Tennis: Ultra Smash for Wii U which received little fanfare. Finally a look at the upcoming Super Mario Maker. With an extensive Developer Story, the amount of love, attention and nostalgia being poured into the game was clear. But again, as this was supposed to be Nintendo’s triumphant closer, a previously announced game wasn’t particularly inspiring. The compatible 8-bit Mario Amiibo certainly looked cool though.

Overall, it was an underwhelming effort, particularly considering Nintendo’s popularity last year. The most promising games had already been announced, and nothing generated much enthusiasm. There was also a shocking lack of new IP, even by Nintendo’s standards. While the presentation was certainly cute and endearing, the entire event was very low-key and fizzled out without a single big reveal or announcement. Zelda Wii U and the NX will apparently be bigger topics next year, and so far that’s the most interesting news to come from Nintendo this E3. Considering the hot topic was transformation, everything felt a little over-familiar.