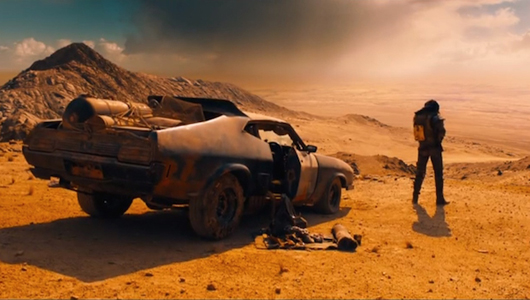 Over 35 years since the he first appeared on cinema screens worldwide, Mad Max Rockatansky is back, but this is far from George Miller’s modest homespun beginnings. What was once an unassuming backyard picture made on a meagre 400,000 Aussie dollars has come roaring back to life on a whole new level. The flamboyant displays of sheer scale and extensive detail squeezed into the first few minutes are disconcerting, almost decadent in comparison, but it only takes a few moments of being reacquainted with the hair-brained franchise to understand this isn’t simply Mad Max reborn with a fresh coat of paint and a bigger wallet. This feels like the film Miller has been waiting decades, if not his entire career, to make.

And so we return to the bizarre wastelands of post-apocalyptic Australia. A bedraggled looking Max (Hardy) swiftly finds himself in the hands of a cultish community led by water-hoarding warlord Immortan Joe (Keays-Byrne), a leader bolstered up by a tribe of gormless bald-headed, pale-skinned ‘War Boys’. After spending a brief period being farmed for blood and strapped to the helm of War Boy Nux’s (Holt) engine like a living figurehead, Max is eventually and reluctantly made co-pilot of runaway Furiosa’s (Theron) War Rig as she attempts escape the confines of Joe’s fanatical citadel with five of his favourite ‘brides’ in tow. 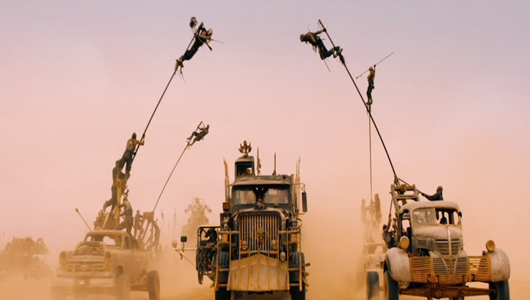 This makes way for what is, in essence, simply a two-hour car chase, but don’t mistake that for a bad thing. There’s certainly more than a hint of Road Warrior here. Miller has taken the best part of that instalment; a wild pursuit through the wastelands for the good of a handful of innocents, stripped the plot bare and given way to a marathon chase extravaganza. It’s not about tedious exposition and shoehorned dialogue clarifications here. What makes Fury Road special is its breath-taking imagination, visual heft and some of the most exciting, engaging and visceral action seen in years. Why waste time on the dreary details of some irrelevant tangential plot point when we can have much more fun watching car-crashes being turned into art instead?

The franchise’s genre-defining, industry-crossing, diesel-punk dystopian aesthetic has reached new heights of macabre madness and brilliance. It’s the perfect counterbalance for the heart-stopping stunts that demand a suspension of disbelief. Convoys of vehicles thunder into what can only be described as a sandstorm that’s on fire, hordes of biker-gang gladiators swing from twenty foot poles, leaping from Frankenstein hotrods to beefed-up oil tankers like robbers onto stagecoaches. This is all accompanied by a fantastic, if slightly impractical looking, motor decked out with half a dozen drummers and an electric guitarist careering wildly from trapeze wires. Thankfully, none of this is presented in the now familiar ‘gritty’ grey colour pallet. Instead we are given a bright, vivid and surreal fever dream of fire, sun, chrome and sand. It’s genuinely surprising how many discernible set-pieces Miller can wrangle from this lengthy pursuit that prevents a sense of familiarity or predictability. There’s no feeling of repetition and no promises of a happy ending. 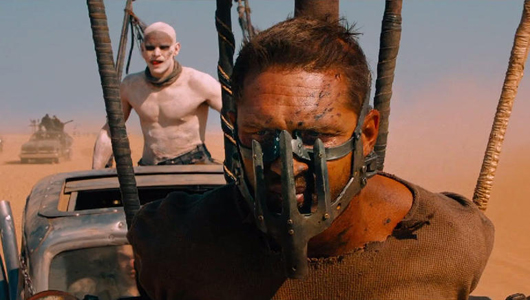 Everything’s certainly gotten bigger and bolder, apart from Max himself, who has gone in the opposite direction. Gibson was a swaggering, shrugging, everyman but Hardy’s incarnation seems a good bit madder in a quiet, mumbling, coiled-spring kind of way. It comes as a pleasant alternative to the ten-a-penny ‘here we go again’ John McClane knock-offs currently dominating contemporary blockbusters. All this willed silence allows for the effortlessly cool Furiosa to take to the driver’s seat both literally and figuratively, and threaten to upstage Max entirely. She certainly looks the part, sporting a skin-head, a bionic arm and engine grease war paint, but she is also in possession of hopes, regrets and motivations. She’s a fantastically human presence, and will hopefully prove an often-cited example of how to treat female characters in this genre for years to come. In fact, for all its gas guzzling macho-posturing, lurking beneath Fury Road’s surface is a surprisingly competent feminist subtext. It depicts a grotesque, war-mongering patriarchal society, whose only saviour may be a ragtag, but capable, handful of women. 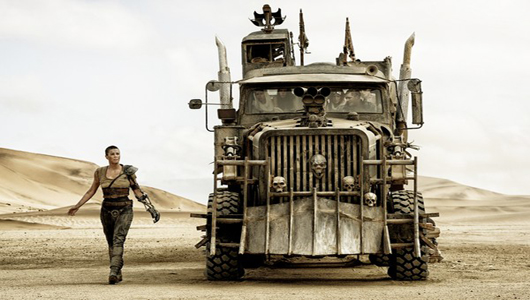 From humble beginnings to dizzying, deranged and disorienting heights, the latest Mad Max outing is a master class in what all aspiring action films should be; fun, frivolous, engaging and endlessly creative, without losing heart or patronising its audience. It sets out to prove that giddy fun and cinematic quality don’t have to be mutually exclusive, and an overworked screenplay is often something to be avoided at all costs. Miller knows exactly what’s needed and delivers it in spades, well aware that taking itself too seriously would have been the ultimate catastrophe for this reboot. It is defiant and mould-breaking, and more than could ever be hoped for from a reinvigoration of a franchise that is daring and plain daft in equal measure. Fury Road is the ultimate demonstration of show don’t tell, and wow, what a show it is.