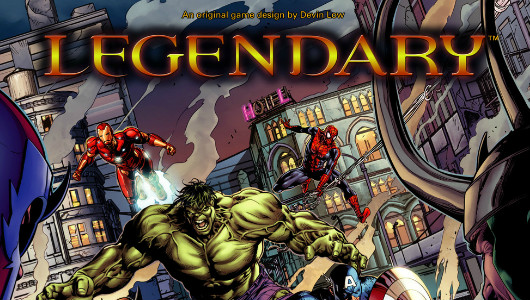 Legendary is a Marvel based deck building card and board game of heroic proportions. It is not only one of the best games with a Marvel licence, but also my favourite deck building game that also ranks among my favourite tabletop games in general. It is on the expensive side, especially if you start adding on some of the more expensive expansions. It can also be a bit difficult to track down in the UK, but I wanted to highlight why it is worth hunting down and paying the price for playing the hero.

From the moment you open the hefty box, Legendary starts showing you why you money was well spent. The cards are of a high quality with some stunning art and while this a card based game, the accompanying board (which does not often come with a deck building type of game) does a great job of helping with the layout of cards while giving character, context and some basic set up and turn order information. The box itself is well designed as it compartmentalises all sets of cards with dividers, while still allowing enough room for the remaining rules are well explained in the reasonably concise, nicely presented rule book that gives a well-illustrated example of your first guided playthrough. The cards that come into play generally have a reasonable explanation of the action they carry out, but some reference to the rule book may be needed while first starting out. Overall though it is a fairly easy game to pick up and learn. 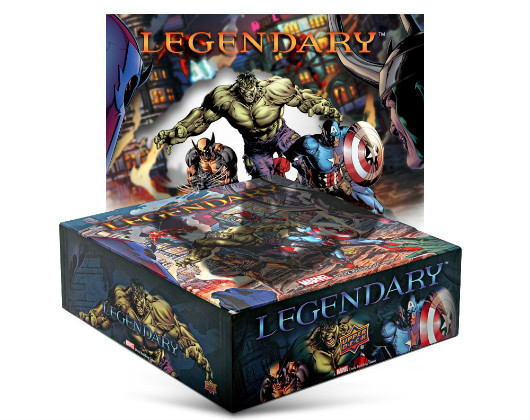 You start by choosing a Scheme you would like to battle against. This sets the scenario by determining the setup of the game, specifying some special rules and the conditions for villain victory. Some schemes specify the villains you will face but otherwise the remaining Villain Deck is composed of foes that you either chose from a selection of villains and henchmen groups to make up the numbers or are dictated by your choice of Mastermind. The exact number of villain and henchman decks in play is determined by the number of players. There are also a number of other cards in the Villain Deck that trigger events specified on the Scheme card or activate the Mastermind’s Master Strike attack.

Masterminds are an elite group of villains, such as Magneto or Doctor Doom. They are the puppet-masters behind the scheme and players have to build up their hand until they are powerful enough to face them. Defeating the Mastermind four times will result in victory for the heroes. Masterminds will often get stronger or more dangerous as the game progresses, so you need to recruit heroes into the group of cards that you start the game with and do so in time to foil the Mastermind’s Scheme.

As with many deck building game you start out with a hand of cards, randomly drawn from a starting set from which you continuously refresh your hand once your go has been completed. This starting set of heroes can be added to throughout the game, increasing your chances of drawing a more valuable card.

The base starting cards perform one of two basic tasks – in this case either return Recruit Points or Attack Points. Recruit Points can be used to recruit one of the five available Super Heroes from your HQ on the board, drawn from the Hero Deck at random, from a selection of heroes that you decide before the start of the game. Attack Points can be used to defeat villains. 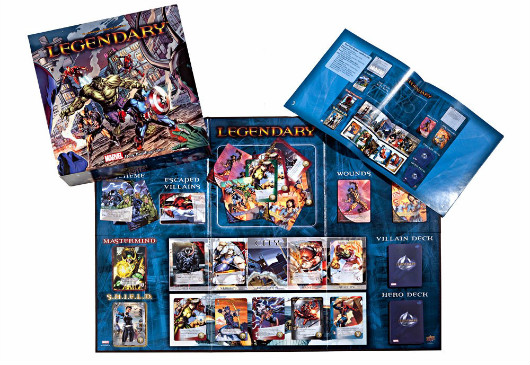 If left unchecked villains will march across the board and escape. Sometimes escaping villains will trigger conditions that will negatively impact the players or, depending on the Scheme you are facing, can trigger the loss of the game. When drawn into you hand, Super Heroes cards recruited to your deck return either increased amounts of Recruit or Attack points or can possibly have a power activated that gives further points or other useful benefits.

I really like that although Legendary has an overall cooperative goal that all players must work towards, there is also a competitive element – as villains, henchmen and Masterminds all return a Victory point reward. The individual winner of the players is whoever has the highest number of victory points at the end of the game. This gives rise to some excellent underhand “tabletopolitics” – with players negotiating and advising based on what is best for the team with one eye on how that outcome will play out for their own individual victory point total.

My other favourite element of Legendary is the flexibility of the game and how this impacts on replayability. The choice of Schemes, Masterminds, Villains, Henchman and Heroes all change from game to game or at least have a degree of freedom that helps keep no two games the same. You can keep a thematic selection that makes sense to play within the confines of the defined Marvel Universes or actually try to stick to those involved with the storyline hinted at by the Scheme name. Often having members of similar Super Hero teams will have bonuses that make them valuable to have against certain foes or schemes. However, it is also good to have the freedom to mix in heroes that may just be a personal favourite or you can just make your life more difficult. 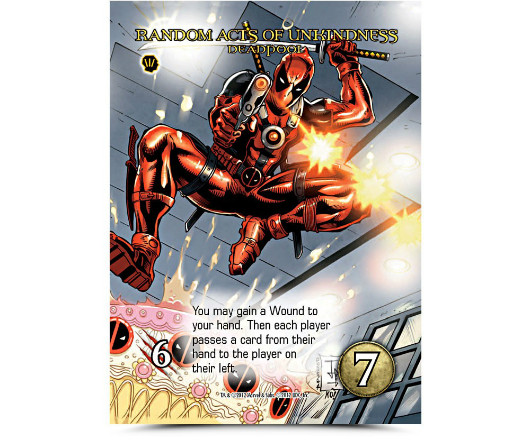 If there is one major criticism it is that at the default level, with a well-chosen selection of heroes, and players working together to a reasonable degree, the vast majority of the Schemes and Masterminds are a bit too easy to defeat. However that does build in some room for backstabbery and it is also where Legendary flexes its flexibility muscles again. Rule variants are included to make the game up to three degrees harder with Heroic, Champion and Legendary versions with various degrees of powered up Mastermind. While there are a few good cooperative board games that are four player, Legendary has room for five but also allows for single play. Although that is a mode I have yet to try it is nice to have the option available.

High quality components and box with great artwork throughout
Flexible game design adds to replayability and good options of player numbers
A fun easy to pick up and play game with a good use of the Marvel licence
Does take a while to set up and play and pack away neatly…
….arguments about who is packing up and which heroes to play with add to this time!
Knowledge of the Marvel Universe may be necessary to gain full enjoyment of the game

Legendary is a fun, easy to play game that you can play cooperatively and competitively at the same time. While the starting range of heroes and villains that come in the box do offer a good range, you may need to pick up one of the expansions to hunt down a favourite – as I did with The Punisher and the Dark City expansion. The larger expansions also add more Schemes and rule variants or you can look to pick up the smaller expansions for teams such as Guardians of the Galaxy or Fantastic Four. You do get a lot of cards in the original box though and the cards available do offer enough flexibility to keep games fun and diverse.

It is a big box, worthy of assembling your closest group of mightiest friends to take on the challenge.