As a board game addict, I am always on the hunt for a new and interesting game. Going to events, such as EGX Rezzed, is always a great opportunity to see new, developing games, and despite an overall video game dominance, this year there has been a good board game presence as well. I have played a board game called Softwar and chatted with its designer Ben of Republicof1, and was thoroughly impressed with the game that put so much fun into dice!

Softwar, formerly known as Dicewar, is an abstract strategic and tactical game with themes of hacking and cyber-espionage. It is a two player game with lots of flexibility in how the game can be set up by players. Most importantly, it is played only with dice, and no, dice rolling is not required. This game has also opened my eyes to how much we take for granted an almost ever present element of the board games, dice, and how interesting and fun a game can be by exploring all possibilities that the die has to offer. 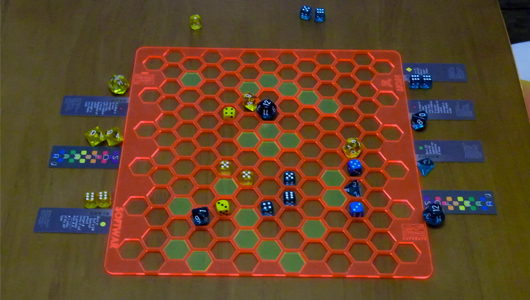 The board is made of a hexagonal grid with terrain which can be modified according to the players’ will. On the board there are six hacking terminals, 3 for each team. The hacking terminals are D6-s, the starting value of which can be agreed by players. The goal of the game in to hack, so take off the board, two terminals of the opposing player. The hacking and attacking is also performed through die basic actions and abilities.

At EGX Rezzed, I played the simplified version of the game, where every side had the same values of their die terminals as well as the same number and type of attacking die units. The attacking D6-s are a typical heavy damage die, moving only one unit per turn but with special power to deal up to 5 damage in one go. D10-s are the fast units which could travel faster around the board but deal little damage. The final type are D12-s with the ability to heal extra damage on adjacent units. All actions performed essentially take the value on the dice up or down. For instance, in the case of fast D10, if the special ability is performed and the dice moves an additional 5 spaces, its value is also decreased to 5. Once the value is reduced to zero that dice is destroyed and is taken off the board. 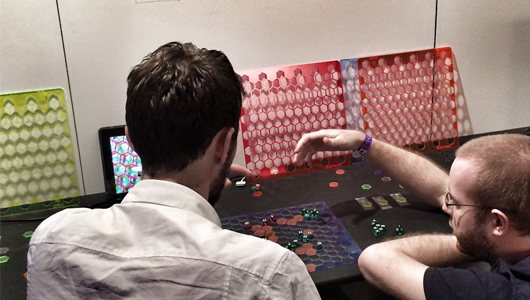 The creator of the game have assured me that the final game will have a wider variety of die with other special abilities. This will allow players to customise their team, for example, possibly playing a more mobile army against a heavy damage army. It would be interesting to see how different units change the gameplay. While the set up at EGX Rezzed seemed the fairest to me, it had also reminded me a lot of playing chess, trying to out maneuverer the opponent and second guess where they would go next. However, especially with a bigger variety of die powers available, as a highly tactic game at its core, Softwar will encourage players to react to the situations that occur on the board and change their tactics through, thus not having one rigid strategy.

On the other hand, I am not sure how much freedom should be given to the players in allowing them to assemble their own die army. While I have not seen all die and I am not aware of all the potential abilities, I imagine that balancing them together for a fair fight could become complicated. Even in the expo set up, we could have chosen different numbers and types of die from the die pool available. Luckily, my opponent and I have made some balanced choices. However, with more options this could become a more complicated and potentially less fun – as in someone will get obliterated almost immediately – gaming experience.

Yet it is also important to note, that the game will become more interesting when the players pass the novice level. Even just playing the game once, has made me see some clear mistakes I have made at the start which I will definitely be avoiding in future. Having experience, would also probably address the balancing issues I have spoken about above. Without speculating on the matter further, I am interested to see how the final game and the rule book deals with those issues. 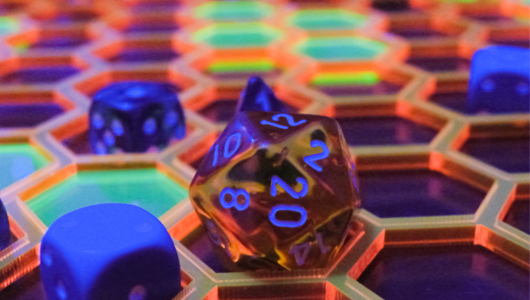 Also when comparing Softwar to chess, I don’t mean in the sense of the unfortunately long established predispositions of chess being complicated, boring and dated. Rather, that both these games are brain scratchers, strategic and tactic battle heavy. However, it takes about 5 minutes to learn Softwar rules and once you get used to moving/supporting/attacking sequence, the game is very dynamic and fun.

While I have seen the game only in its laser-cut Perspex prototype with generic die, I could already get a sense of the theme of the near future cybernetics, which in further development could look even better and more unique. Simple in its design, the game elements are already effective in conveying the main theme of the game and the use of the traditional die is in no way a downside.

The next stage for Softwar is getting the base set that best represents and sells their game, both in terms of game content and quality of component elements. Those who are interested to learn more about Softwar can sign up for the mailing list on the official website or they can even play it at The Cats are Dice board gaming event in August. You can also here about Tim’s experience playing the game on the episode of BRB UK 135: Rezzed and Rami.