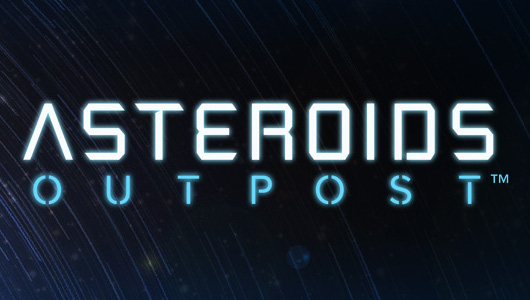 Asteroids is one of those games I know about and have played, but it never really impressed me that much – probably because I wasn’t around when it came out. Naturally I was pretty excited to play the namesake, published by Atari, Asteroids: Outpost. So if I remember correctly, Asteroids was this game where you’re in a spaceship, shoot asteroids, get s and try not to die, right? So why is Outpost a PVP/survival multiplayer game? Can anybody tell me?

In Asteroids: Outpost you start off by putting down your HQ and a turret on a planet’s surface. The turret and the fact that you shoot asteroids are the only things connecting these two games. So after you put down your buildings, you get in your turret and start shooting these asteroid menaces. Upon being short the black, burning balls turn into black balls with some colourful streaks. Using a mining tool, these hunks of rocks are turned into several different metals, your resources. At the moment there are two things you can do with your precious metals, you can expand your base with several more buildings, or you sell them for sweet money.

The only items your hard earned cash can buy are some upgrades for yourself. More oxygen, armour, jetpack fuel and jetpack speed. The only upgrade I thought to be useful was the extended amount of oxygen. When you first start the game you only have enough oxygen for about a minute. After that air is depleted your health starts to go down. The other upgrades, especially the jetpack ones, are utterly useless. More armour would be helpful if there were any people on the servers – the highest number of people that were supposed to be on a server with me was four, I never even met another soul. And the jetpack can only be used for about 3 seconds, after that its fuel is empty again and needs to recharge. The only use for these glorified jumping boots is to get into your base. If you picked a bad place for it, there might be the chance of you not getting into your own home. For example, when I first started playing the game, I built my HQ on a slope. All was well until I wanted to get in, only one of several entries was high enough for me to jump into. 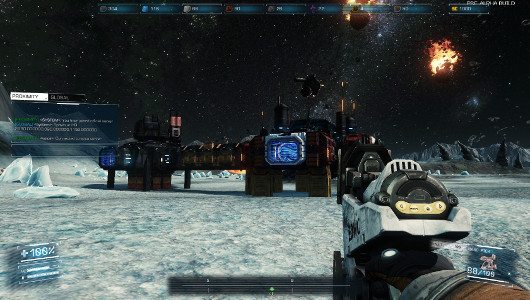 At the moment, only a few buildings can be built to expand your base. There are hallways and four way connectors, to build walkways between your other buildings, and several utility buildings. A greenhouse to regain oxygen faster in your HQ, solar panels to recharge your tools faster, and a factory to craft faster. Another more noteworthy building is the vehicle pad. As soon as you put it down, you are able to summon a jeep. With your new fancy car, it’s possible to go exploring, as the jeep supplies you with oxygen when you’re driving. As I was playing the game I didn’t really feel any difference with these buildings put down. The game doesn’t show how much of a difference the new built buildings make, so crafting them in the first place is a bit pointless.

These mechanics I just told you about are the main ones in the game. So what else is to the game, you might ask. Well, that’s a good question. As there aren’t any other players around, the PVP aspect of the game falls a bit flat. You can however, go to any other player’s base and steal a bunch of his resources. The game doesn’t really protect you from these thieves. They can just walk into your base, press a few buttons, wait for a while, waltz out and drive back to their home and get all your stuff. 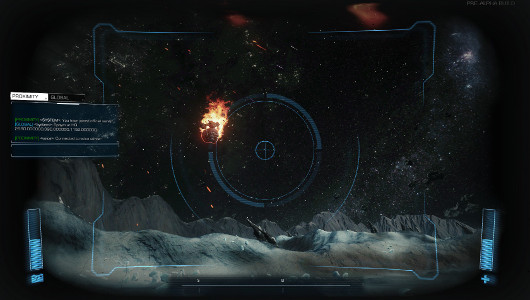 I could go on about facts on this game, but why should I? This game is a prime example why Early Access projects can go right down the drain. Asteroid: Outpost is an alpha at best. The game already has content, but you can get most upgrades and buildings in the about 30 minutes. And after that, there isn’t anything to do. It’s a bleak game, with incredibly cheap sounds and really bad car physics. It’s just not a good game and I can’t recommend this game to anybody. However, if there are more updates to the game and it improves, I’ll gladly take a swing at it again and see what changes.