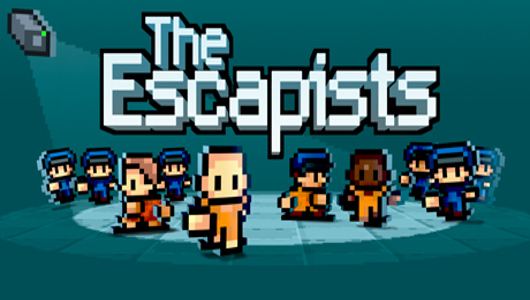 With Grand Theft Auto V’s long delayed heist mode finally being released and Battlefield: Hardline on the horizon too, we’ve got absolutely no shortage of cops and criminals butting heads at the moment. However, if you’re looking for a break from gritty realism then you should look no further than the strategic, light-hearted and charming retro styled game, The Escapists.

The Escapists is played from a top down perspective in an 8-bit stylized world. The premise of the game is simple, escape from the in game prisons in whichever way you choose. Each prison varies in difficulty and different strategies need to be employed in each as there is no single sure-fire way to be able to escape every prison with.

Strategy in The Escapists is based on routine and timing as well as crafting appropriate items to aid you. Each prison has a different daily schedule. For example, a day in the Centre Perks prison progresses with morning roll call, breakfast, free time, lunch, job, exercise, shower, dinner, free time, evening roll call and finally, lights out. Your first few in game days in The Escapists should definitely be spent adhering to the routine as it allows you to get an idea of the layout of the prison and where everything is located. 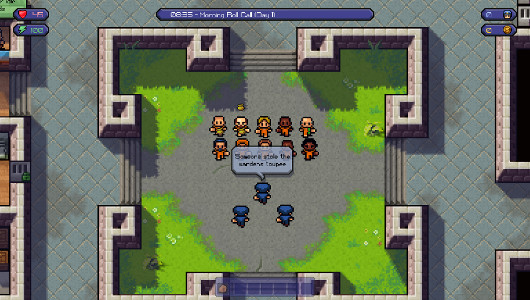 You’re able to train up your character in the fields of strength, speed and intelligence, all of which are important. You can do this by using the prison gym for strength and speed or by using the internet/reading for intelligence. Strength allows you to take more hits from guards and prisoners, speed allows you to outrun guards on your tail and get around quicker and most importantly, intelligence allows you to craft more intricate items and weapons that will inevitably help you to escape.

You can interact with the other prisoners – who you can individually name, resulting in a fair bit of hilarity – who can give you extra side missions to earn a small amount of money – indicated by a small green exclamation mark above them – and who will also sell you crafting items that may be harder to come by. You’re able to steal from other prisoners too by rummaging through their cells and looting them if they’ve been knocked out – though doing so in plain sight of the guards will raise their suspicion and may result in a prison lock-down if you’re too reckless. You can also loot guards if you can knock them out without being seen or knocked out yourself; they tend to have more desirable items and crafting components.

Staying in other prisoner’s good books by completing their tasks and gifting them weapons allows you to earn their trust which can make things much easier for yourself. Other prisoners will be more likely to sell to you if you’re friendly and administer beat-downs on guards on your command. It also keeps them off your back and gives you one less threat to worry about. Prisoners also have jobs, and they might be more advantageous than yours. By beating up a fellow prisoner before they get to their job they’ll be fired for not meeting their quota, allowing you to swipe their position. Different jobs can warrant easier access to items needed in your escape or put you in a more advantageous position to escape – such as being nearer to a perimeter fence. 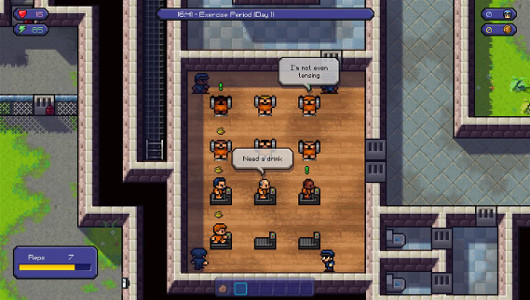 Contraband items are a necessity in The Escapists as they’re the items that will more than likely get you out of prison in the shortest amount of time. Contraband is marked in red and if you’re knocked out whilst holding some – or if you’re selected for a cell search – the guards will confiscate your items and you’ll need to spend time amassing them again. Certain prisons also have metal detectors which will alert guards to any contraband you might be carrying. There is very little room for error in the game. Tension can run high when you’re on the brink of messing up as days of preparation can go to waste. More than once this resulted in me putting down the controller in frustration.

When it gets to make or break time you need to make sure to not get caught. Concealment items such as hidden walls and fences as well as bed dummies can be your best friends but they won’t work in every situation. You need to think carefully about when, where and how to break out, the possibilities are endless. You can tunnel out using spoons, cut your way through a fence or even don a disguise. Do you attempt to use your free time to move forward with your plan or do you wait for lights out? Not attending certain routines results in a lock-down and a search for you, staying in lock-down too long results in you being sent to solitary confinement for three days and your items being confiscated. Yet again, one small misstep can have huge implications. 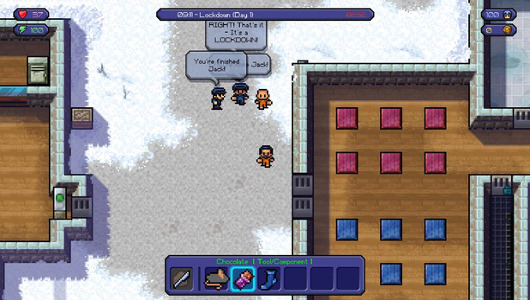 The game tests your patience as well as your cunning and your ability to adapt to changing situations, yet when things are going well it’s a brilliant amount of fun. Even after playing for a few hours I’d barely scratched the surface, and I’m itching to get back to playing it and discovering new things to craft and new ways to break out of prison.

However, there are a handful of bugs and issues which can ruin your game completely such as the inability to place important concealment items which more than once resulted in hours of game-play being ruined in an instant, which was immensely frustrating. The UI can also prove to be quite cluttered at times which resulted in me bonking a prisoner on the nose and losing precious items on numerous occasions.

Charming and light-hearted
Challenging, deep and a great test of patience, but…
…one small mistake can lose hours of game-play
Bugs can prove immensely frustrating

The Escapists is a fun little game that is certainly worth your time if you enjoy being strategic and watching a well thought out plan come together. It definitely won’t appeal to those who have very little patience, as hours can go by with very little reward. The satisfaction of finally escaping a prison however, is more than worth it. Bugs and frustrations aside, The Escapists is a game that is definitely worth your time and money if you’re looking for something challenging to delve into. It’s an incredibly simple concept that has some deep and rewarding game-play if you’re willing to put in the time and effort.