Continuing their trend towards becoming the adventure games’ equivalent of TT Games (Traveller’s Tales in this case), Telltale Games are once again putting their own spin on an already-existing franchise. While Telltale do not have an easy brand to associate themselves with, like the LEGO games, most gamers now relate their style to story- and character-focussed titles where player-choice is given more emphasis than fast-paced action set-pieces.

Turning their hands to Gearbox Software’s Borderlands series, Telltale Games’ Tales from the Borderlands is the first game they have tackled that uses another company’s game IP. With a Minecraft game already in the works, many now see this as Telltales’ future – so how does it look?

Differentiating itself almost immediately from Telltale’s other titles, notably The Walking Dead, Game of Thrones and The Wolf Among Us, episode one sets out a far more humourous stall than the others. Avoiding the serious, intense tone of those titles, Zer0 Sum puts fans of the Borderlands series at ease with its wit and charm. Set some time after the events of Borderlands 2, episode one introduces us to Rhys and Fiona. Rhys is a Hyperion company man looking for his next promotion, whereas Fiona is a native of Pandora who is looking for the final con.

Especially because the game is so focussed on humour, the voice cast need to be on their game. Telltale Games have always had strong choices in their games but Tales from the Borderlands is one of their best casts – Troy Baker and Laura Bailey voice the two main protagonists, Rhys and Fiona; Dameon Clarke returns as Handsome Jack; Nolan North plays the paranoid though no-less violent August; Patrick Warburton lends his booming voice to Rhys’ nemesis, Hugo Vasquez; and Chris Hardwick plays Rhys’ sidekick Vaughn. 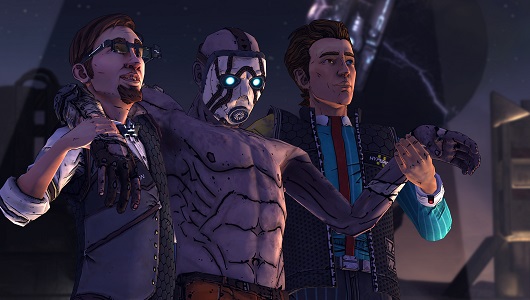 Each character is given their own look and big personality, befitting the inhabitants of Gearbox’s universe. The cast then bring them to life wonderfully, with each given plenty to work with from the fantastic script. The jokes and comebacks are hilarious for the most part and the story skips along at a good pace.

Speaking of the story, Telltale have also decided to use a different structure for Tales from the Borderlands. At the very beginning of Zer0 Sum, Rhys is captured by a mysterious, masked man. When asked to recount the events that led to this point, Rhys tells the story and we play it out. However, he can be an unreliable story-teller, leaving us to embellish the story as much as we like. It is a fun twist on the usual formula and gives scope for more jokes. 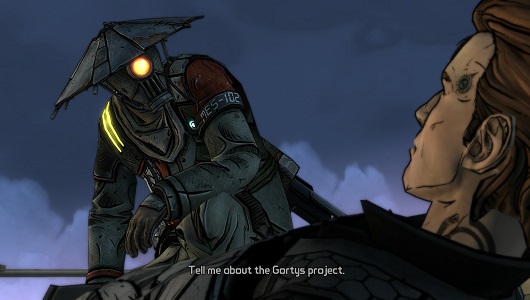 The story begins with Vasquez taking the promotion that Rhys had been gunning for at Hyperion, the corporation from the Borderlands series that seeks to control Pandora’s mineral riches and alien artifacts. When Rhys discovers that he can pinch a deal from under Vasquez’ nose, he sets out for Pandora with his sidekick Vaughn to complete the transaction. At the same time, Fiona is working on a con that should set herself and her sister up for life. Unfortunately, Rhys and Fiona are destined to meet and so the tale commences.

Unlike almost every other Telltale game recently, Tales from the Borderlands appears to have a clean bill of health when it comes to how it performs. I played the first episode on PlayStation 4 so perhaps that is to be expected but their Game of Thrones title, and the updates to The Walking Dead and The Wolf Among Us, are plagued with issues (at least in my play-throughs). 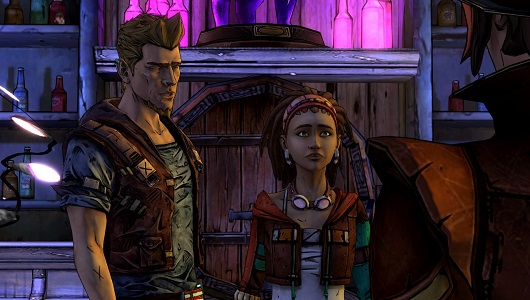 The only word of caution I would raise, ahead of someone purchasing the game, is to at the very least make yourself aware of the Borderlands plot. Characters and plot points come in and out of the game that require some knowledge of Gearbox’s universe to make sense. For instance, the character mentioned in the episode’s title appears a number of times with no explanation given – so it may be time to bone up on your Pandoran history.

Superb comedic delivery from the entire cast
The ‘unreliable narrator’ model is ripe for funny setups
A Telltale game that performs well. Who’da thunk it?
If you are unfamiliar with Borderlands, you may get lost 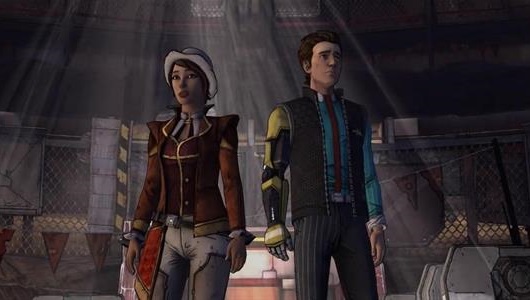 Tales from the Borderlands: Episode 1 – Zer0 Sum is a strong opening to a series that may lay out the future of Telltale Games. It is riddled with humour and charming characters, with a game engine that finally appears to be able to keep up its end. Thankfully, with this review going up later than it should, I now get to delve straight into episode two – I’ll be right back.